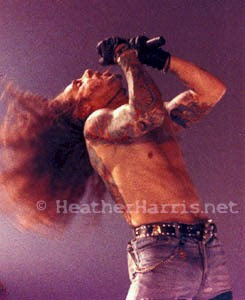 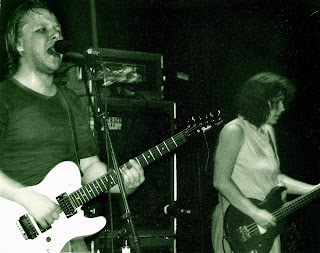 Mr. Twister, my better half and onetime photographer of Jim Morrison, Elton John and The Stooges for Rolling Stone and Creem amongst other periodicals, claims I am a reckless photographer who treats my cameras as if they were hockey pucks. I disagree insofar as my recklessness has extended beyond mere continual photographic equipment repair bills.

I permanently lost hearing getting the first two shots displayed here. Photo on the left is singer Ron Young of Little Caesar during the band's early '90s video shoot for its Geffen/DGC single "Chain Of Fools." Besides being a superb singer, he was (and remains) a highly photogenic individual what with the tattoos that landed him that part in the bar scene of "Terminator 2, Judgment Day" futilely attacking Arnie and a sense of drama in his song delivery that's never artificial. Video shoots are wondrous for having enough light to tackle anything a still photographer could dream for, and I was able to manually focus on his eyelashes (a physical trait now gone with the wind) to get this action shot, and I'm proud of it. The downside is one must stay out of range of the cinematographers, which dictated this be photographed by my crawling onto the 8" space in front of the P.A. system looping the song for the band's benefit. Loudly.

The second photo is an illustration born of frustration. The Pixies, a band obviously to my liking, had lit their Hollywood Palace show as if solely for military night vision goggles. There was little if any green light at all, and my only chance to capture some to fulfill the assignment was to repeat the trick of crawling on the 8" space in front of the P.A. system to get closer to obtain the shot. In this case I'm angry it cost me some hearing, as it's not that great a photo. But I'd had tinnitus diagnosed some 20 years before that, so what the hey cumulatively.

I lept into the water with my then Nikon to get this P.O.V. shot below of the aforementioned Mr. Twister and our Golden Retriever Crystal swimming in a swank Holmby Hills pool. Why not, it made for a memorable pic of two family members in the same position of doing the same dog paddling. The camera emerged unscathed, unlike one decades later that succumbed to intense audience gobbing at a double bill of The Zeros and The Hangmen, though that technically couldn't be termed me being reckless. 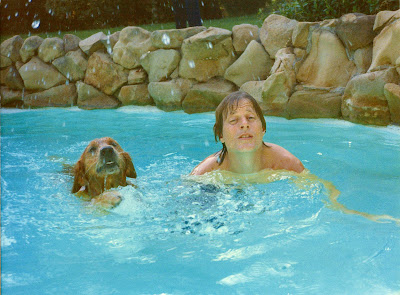 I just love this blog. It really sums up the thoughts from the other side of a lens. :)