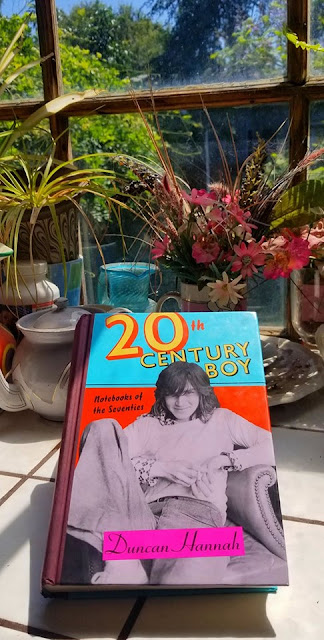 Duncan Hannah's 20th Century Boy-- very enjoyable read. Nostalgia for those of you who came of age in NYC in the 1970s, nostalgia for me of my own art school daze, and great observations of the author's interactions with  the era's creative movers and shakers.

As a good looking, trendy young fellow with actual talent, good reporting skills and snarkily realistic attitude to all that some of us grew up with and took for granted regarding sex, drugs and rock'n'roll, Hannah is just the character you want to follow around in his candid and Candide adventures. In contrast to his East Coast atmosphere, my photo is in today's warm California sun.
Posted by Fast Film at 11:44 AM No comments:

Oddly, my favorite show for watching horses during the 1950s and 60s glut of TV westerns wasn't The Lone Ranger or Roy Rogers, it was The Cisco Kid. It used some amazing horseflesh, including Cisco's showy tovero pinto and his sidekick Pancho's Palomino Loco.  "Oh, Ceeeesco!!" was their clarion greeting.

I wasn't a fan of western riding even at a really young age because it seemed unnecessarily harsh compared to English equitation, not knowing how abrupt stunt riding was in those days. Hollywood Hoofbeats original and updated books by Petrine Mitchum, an equestrian and child of old Hollywood, traces the history of oversight of animal welfare in films and tv.  Boy, was it needed... I now fathom the difference between the two styles when ridden correctly-- SUV or truck for ranch work, sports car for fun!

Trivia time: The Cisco Kid was the first TV show to be filmed entirely in color, and to have Hispanic actors in regularly starring roles. Its star Duncan Reynaldo was actually Romanian, but Leo Carillo who played the Kid's sidekick Pancho was a multifaceted native Los Angeleno of Spanish heritage (his great-great-great-grandfather arrived in San Diego in 1769 in the Portola expedition from Spain.) Carillo had been a professional cartoonist for the San Francisco Examiner, played his famous Pancho role when he was 70 (!) years old, was a Republican, and was such a generous preservationist and conservationist (he frequently permitted Boy Scout groups to camp on his 4,000 acre Carlsbad ranch) that Santa Monica's famous Leo Carillo Beach is named in his honor. 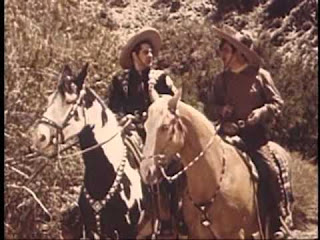 The Cisco Kid character was based upon the O. Henry short story "The Caballero's Way," and he wasn't a good guy at all, but joined Paladin (Have Gun Will Travel) and Hopalong Cassidy as tv's first black clad anti-heroes who nonetheless had a sense of fair play and were always doing good. End of today's nostalgia post...
Posted by Fast Film at 12:25 PM No comments: