Bad news not crisis-related...Police searched unsuccessfully for famed photographer Peter Beard after he wandered away from his beachfront home in Montauk NY on Tuesday 3.31.20. Beard, 82, has dementia and was described by police as “vulnerable.” Beard has lived a controversial if adventurous life, but it's undeniable that his 1965 photo book "The End of the Game" was a major force in jump-starting awareness of the doomed plight of wildlife in Africa.

the rocky cliffs of his Montauk estate...
x

BETTY MABRY DAVIS: THEY SAY I"M DIFFERENT. AND HOW! 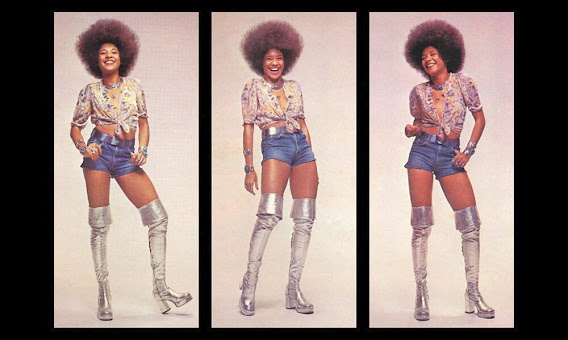 My take: the world is definitely a better place for the existence of the 2017 documentary Betty Davis- They Say I'm Different. Buy it! Stream it! Whatever it! Its filmmaker Phil Cox faced an EVEN MORE ELUSIVE subject than Steven Kijak did with Scott Walker: 30 Century Man. Take in the director's fifteen minute explanation of context and Betty's own contribution in the special features, which then makes this shortish film complete. (my educated guess is that contractual obligations relegated all this pertinent info to the special features addenda. And then those glimpses of the lady, both visual and information-wise add up nicely.)

She was an awfully important total pioneer to have dropped off the face of the earth without having died. Betty's explanation in the special features of her total withdrawal from the music world made perfect since to me, since it was in our fellow artist's jargon of metaphor. In Japan for a performer's live residency, she welcomed a spiritual hike on Mt. Fuji. There she saw a poor mother monkey carrying around her dead infant. One couldn't tell if the mother knew it was dead or not, but the monkey couldn't take the next step to stop carrying it with her.

Betty created an unprecedented career of writing, producing and performing her own audacious funk (the first African American woman to do so,) so different for her career era (1968 - 1979) in its authenticity and specificity of everyday sexual concerns of young women. It was so very ahead of its time (way before Madonna, Prince, Lady Gaga, Fugee Lauryn Hill, etc.) that what she had given birth to could not survive alone. And unlike the monkey mother, she took the next step and stopped carrying it with her...

Also in the special features is an all too familiar tale (particularly to Stooges fans of 1972-4 Raw Power era. Ask me sometime to recount my own Antiques Roadshow moment of discovering I had 50% of their known live footage in the universe) of the rarity of film footage of such pre-video, pre-digital artists. It took really expensive, specialized equipment to shoot low light indoor stage film footage then. But I'll save that tale for director Phil Cox to tell. Other favorite moments: her former band reassembling for a conference call to her, reassuring her "The big record companies don't control everything any more. Come back!" plus Betty echoing the very words of another similarly named icon, Bettie Page, who both declined being filmed in the present tense saying "Nobody wants to look at an old lady...