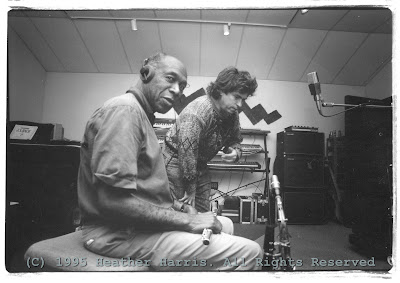 Left: Buddy Collette August 6, 1921 – September 19, 2010/right: producer Harvey Kubernik
My photo of Buddy Collette from the recording sessions for "Buddy Collette: a Jazz Audio Biography" double cd set of his spoken word adventures, produced by Harvey Kubernik (seen at right,) liner notes by Kirk Silsbee. Collette's tales of civil rights activism on the West Coast with Paul Robeson and Frank Sinatra, and of working with jazz greats from Charles Mingus to Eric Dolphy were as intriguing as his artistry with flute and saxophone.
Posted by Fast Film at 2:17 PM No comments: 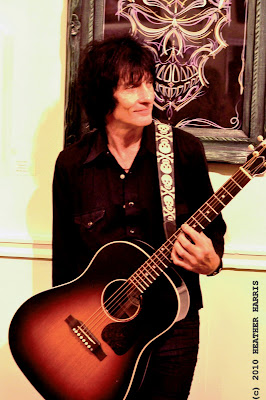 Jimmy Recca, bassist for The Stooges during their legendary phase with both James Williamson and Ron Asheton on dueling lead guitars (cd box set of same available here LINK,) played a solo acoustic gig for the opening of an unusual assemblage of fine art talent: an exhibition by members of the Art Directors Guild, IATSE local 800 (that's union art, scenery and design personnel of movies and tv to us civilians.) It was all instrumental sets with his Gibson acoustic, the Stooges' "Gimme Danger" and the Stones' "Angie" emerging as highlights.

Jimmy is seen in front of Brent Myers' "Pin Striped Skull," a painting which already has been seen in a book about Kustom car detailing. Lynda Burbank's painting below, reminiscent of a crowded ensemble style currently popular in high fashion photography, also caught my eye. These works and all others in the exhibition remain for sale at Gallery 800 on 5108 Lankershim, North Hollywood, Calif. 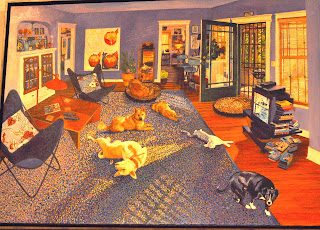 "Our House" by Lynda Burbank
Posted by Fast Film at 8:18 AM 1 comment:

THE PANDORAS DISCOVER THE STOOGES 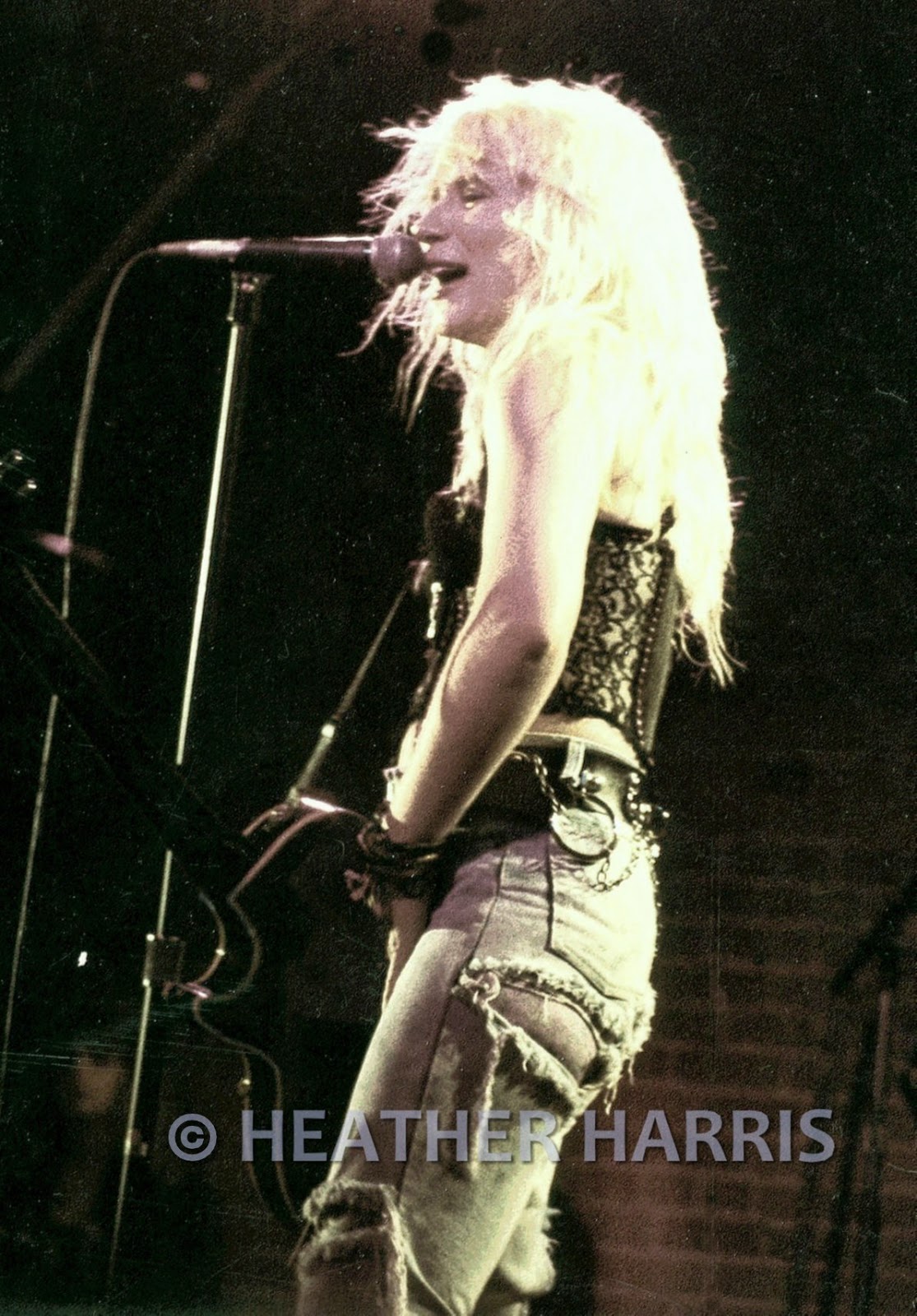 The Pandoras were one of the few bands with whom I had multiple interaction throughout their career. (see LINK.) Though initially deemed a retro '60s revisionist, the late Paula Pierce, figurehead of same, preferred to travel forward in time through the decades, albeit incrementally. My above photo was taken during a very, er, um, demonstrative instrumental break in her band The Pandoras' cover of her then latest discovery, The Stooges, hair metal of the era be damned. Of course she'd zeroed in on "Loose." 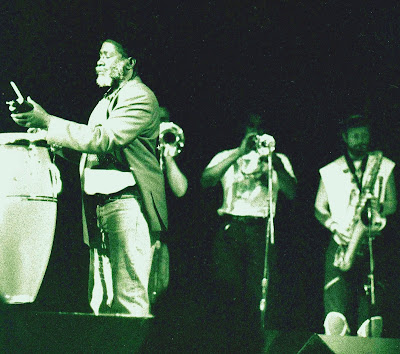 my photo of
Winston Rodney and Burning Spear performing at the Greek Theater, Hollywood CA. Through Rodney's distinctive vocals and subject matter, you can always tell a Burning Spear song when you first hear it. More info on their own site LINK

ROAD to THE RUINERS 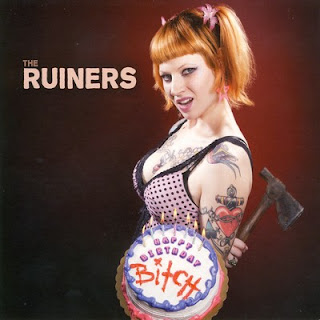 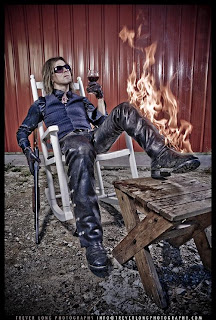 A five-piece, self-described garage-glam, current combo from Detroit, The Ruiners include a winsome if hardcore Russian babe, an art professor, a fuzzmeister guitarist, a devoted couple, and a genuine pyromaniac, some of whom may coincide in the same person. Newest release in their reign of terror is "Happy Birthday Bitch!" replete with ditties of beer runs, sugar highs, zombie porn stars, outfoxing the constabulary, and assorted pop culture angst sung by Rick Ruiner over sleazebucket popcore as some sort of unholy two-headed grafting of late Cramp Lux Interior cum The Partridge Family. I quite like it.
And I'd probably like it even more live, wherein amid the
bubblegum/psychobilly/go go chaos singer Rick ignites his own trousers (or hapless objects around him) with lighter fluid. Anyone who sets his or her self on fire for our entertainment pleasure is someone I admire, previous practicioners being The Crazy World of Arthur Brown whose eponymous vocalist set his own headdress on fire, and (Mr. Fastfilm) Mr. Twister during his first band Christopher Milk's daze, who set his bare torso and arms on fire onstage some, gulp, forty years ago.
For more variety, the below sample video is not from the aforementioned CD since one presumes even the average enlightened reader will be obtaining same on his or her lonesome.
Posted by Fast Film at 7:47 PM No comments: 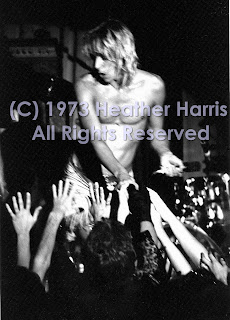 A bit of camera shake as I was jostled by the throngs at the Whisky A Go Go, 1973 but evocative of the Stooges' audience always going for that extra sensory dimension when so provoked.

38 years later, Observer.com noted the identical phenomenon at Don Hill's, Sept. 2010 Fashion Week private gig of Iggy and The Stooges: "...they reached out their hands, because they had to touch him to believe he was real." Which is sort of lyrical as well as observational, their full review in the Style section here LINK.

Contemporary to the shot above, my only photo sale was to a local alternative rag in their Style section as well, who bypassed all my iconic pics of the Whisky gig and its highly photogenic Stooges band for a relatively tame outtake. That thinking prevailed then for both Iggy and the Stooges, (and me) all vaguely undervalued. 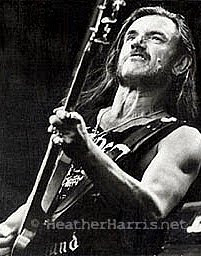 Lemmy of Motorhead, always the best even if I can't remember at which metal festival I took the photograph.
Posted by Fast Film at 5:33 PM No comments:

It's David Werner, the lost American Glam superstar of the 1970s, described by those who saw him live with accolades something like "as good an artist as Bowie but with a more muscular sound." The above song was gleaned from his third LP the self-titled David Werner, to my ears his best, wherein every song was a gem, all the arrangements perfect for the Glam idiom, and the overall sound of the band remained excellent throughout.

None of his three LPs made the modern transmogrification to interim cd format, and his files are sold separately, losing the continuity of the original whole works. When you do find them assembled, it's so jarring to hear something this great of which you had no prior knowledge.

His guitar partner Mark Doyle and he still work together occasionally, but in the intervening 35 years, you'll probably only encounter Werner's name on songwriting credits for Billy Idol and such.
Posted by Fast Film at 5:07 PM 1 comment:

MY AD HOC CARTOONS printed in the underground press

You're going to have to click on each of these three cartoons individually to enlarge them for maximum humor effects. The third was based upon a rightfully short run of a real musical originating in Japan. Peopling it with turkeys and dogs was deliberate. No animals were harmed.

My first job after graduating UCLA found me employed as an assistant art director for an underground newspaper The Los Angeles Weekly News, a spin off of the Los Angeles Free Press, run by its founding editor Art Kunkin. It was a three-day job (literally. I worked 72 hours in a row. You can do that in your twenties. Then sleep one full day, then catch up, lather, rinse repeat.) It involved graphic organization, putting the newspaper to bed i.e., final preparation for printing, shameless infill with my own photographs, and filling in space at the last minute where advertisers had reneged or copy editors had miscalculated column inches.

For this last duty I created the above series of panel cartoons on the fly. I was much influenced by a) "Summarize Proust" by Monty Python; b) the artists at National Lampoon magazine; c) Joe Moshcitta's "10 Classics in 10 Minutes" and d) the first Saturday Night Live. It was, after all, 1973, and the last panel of the Biblical one spoofs the now late John Lennon. The series ran the three times indicated on the above tear-sheets. I drew each of them on the spot in black felt-tip pen to fill in the aforementioned space quotients.
Posted by Fast Film at 7:27 PM No comments:

"Twist Barbie" by Shonen Knife is one of our household's favorite songs ever. Here's my anecdote on Shonen Knife canon discovery. Calvin Johnson of K Records wrote me way back in the day when I asked for a K catalog, inquiring if I was the same person who art directed The Best of Bobby Darin on Warner Special Products (and yes. My art direction credit was hidden inside the cd booklet. What does that say about both of us?) His catalog, so verbose about each artist, merely had the following copy for the first Shonen Knife release: "the best thing ever."
Posted by Fast Film at 9:50 AM No comments: 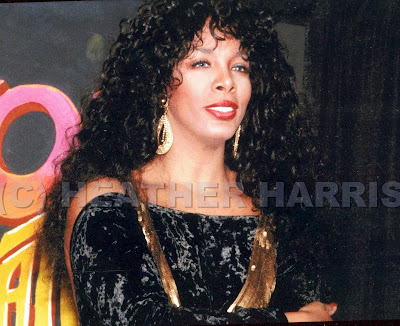 I once was shooting a photo op on '70s dance artists like The Bee Gees and Vicki Sue Whatshername during a later era, and it's funny, when Donna Summer's turn came and she seemed nervous, body language all insecure/hesitant rather than the robotic overconfidence we associate with superstars, the scruffy punk-clad photographers all kept reassuring her aloud "No, no, we really like you Donna!" because she wrote so much of her own material and did far more work in the studio with mentor Giorgio Moroder than was recognized. I hadn't seen that bonhomie between celeb subject and the photo press before and I haven't seen it allowed since. 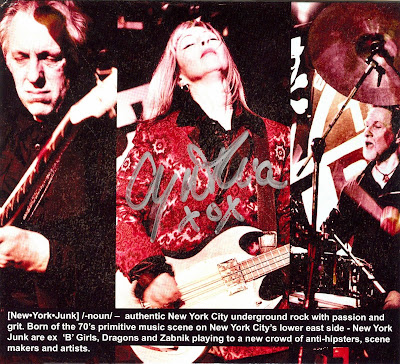 "Passion of the 10th St. blues NYC '77": a favorite new listen in my car and premises! You get the inside gatefold of NY JUNK's cd for most representative image, seen above as A) their self-description remains a pretty good assessment (and you get to see bassist Cynthia's autograph) and B) I haven't had the pleasure of photographing them live yet.
There's a certain signature sound of rockers that clambered onto to the mid-1970s NYC proto-punk and punk scene: lyrics intoned about urban hard times via emphatic, slightly whiny vocals over a simple but cooking band sound with an underpinning of blues or R&B, more referential to whom the NY Dolls and Jim Carroll listened, rather than to whom the all-wild-all-the-time Stooges and Ramones did.
Singer/guitarist Joe Sztabnik delivers aforementioned emphatic vocals in a likeable growl as well (lest one misconstrue a prior adjective, I like his voice a lot); former B-Girls (an original '70s punk band with much deserved press in the anti-Rolling Stone bible of the day "Rock Scene") Cynthia Ross is the undisputed Queen of the walking bass lines, and Gary Barnett drums the trio into shape.
You can order the NEW YORK JUNK cd and catch a few Youtubes via their website LINK. 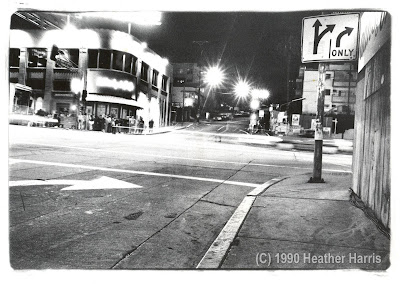 The Whisky A Go Go, Sunset Strip, Hollywood, at night, twenty years ago. I used a sandbag instead of a tripod for image stabilization for the long exposure. I was there night-shooting Oliver Stone's production of "The Doors" for a (cleared) magazine assignment which had wanted shots of how The Whisky had been set-dressed for the film. I thought it would be more fun to shoot during the actual production, which is why there are no cars.

R.I.P. MICHAEL BEEN of THE CALL 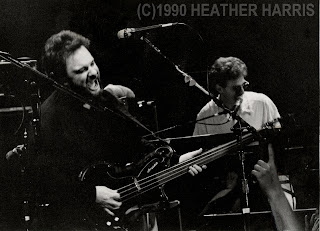 Michael Been of The Call passed away backstage at a Belgian rock festival recently. Anyone who's heard classic-alt radio has heard his early 80s hits "Let The Day Begin" and "The Walls Came Down." My photo above shows someone in the audience giving the "one Lord" sign in response to his impassioned performance, which featured a certain religiosity. (Just because I don't live there doesn't mean I don't recognize it on the map.)
Posted by Fast Film at 5:29 PM No comments: