ATLANTA NIGHTS, TRIUMPH OF THE SWILL! 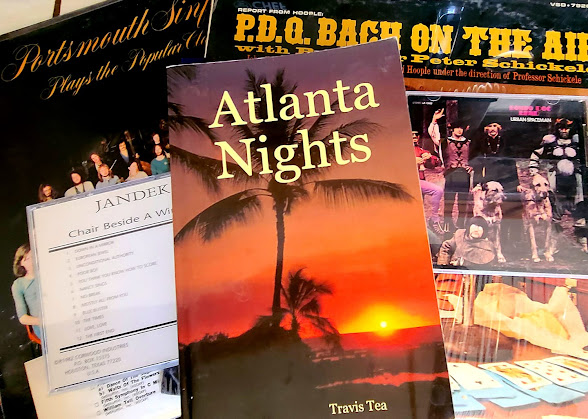 Once upon a time a publisher publicly impugned science fiction writers, so a bevy of science fiction writers deigned to embarrass selfsame publisher.  Three dozen fantasy and sci fi writers under the nominal guidance of James D. McDonald devised a  perfect revenge--their own equivalent of the "Bad Hemingway Competition" or the "Bullwer Lytton Bad opening sentence to a nonexistent turgid novel" competition-- and wrote a smoldering trainwreck of a terrifyingly bad novel entitled Atlanta Nights, authored by "Travis Tea." They did not consult with one another to guarantee zero continuity whatsoever, and let the typos, plot holes, nonsensical passages, grammatical errors and legendary incongruities rip.

Those legendary incongruities would be: characters change gender and race; characters die and reappear without explanation; there's a missing chapter; two chapters have the same number; two chapters are word for word identical; the denouement, such as it can be, is in the middle of the book; and lastly, the most incoherent chapter of all was "written" by a random text generator based on patterns found in previous chapters.

And the impugning publisher accepted the manuscript on Dec. 7, 2004 for impending publication. Legal advisors to the wacky bunch promptly convinced them to divulge the truth, and the offer was retracted. However, available in print it remains to this day, and all proceeds go to the Science Fiction and Fantasy Writers of America Emergency Medical Fund.