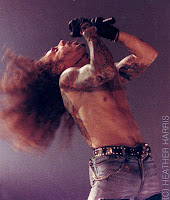 My photos of Ron Young
today, left, and right--
fronting Little Caesar
during Guns N'Roses'
heyday of the late 1980s
Ron Young is the amazing hard soul vocalist of Little Caesar,
also is an art-metal fabricator (that would be actual metallurgy, not the "Kerrang!" canon,) an avid retro-auto restorer, animal enthusiast, devoted married man, and one smart cookie in the cerebellum department. Today he initially proffered a cheeky rejoinder on Facebook to Axl Rose's published rant of turning down his own Guns N'Roses induction into the Rock and Roll
Hall of Fame this coming year. We needn't dwell.

HOWEVER, in his second rejoinder Ron waxed quite eloquent
in writing what we all wish we could articulate about our mutual love of music. Verbatim and with his permission, below.
"I'm sure any musician would tell you that they have dreamed
of getting a Grammy, let alone a lifetime of achievements and recognition like an induction...even if it is corporate, political bullshit. I have had the honor and good fortune to have a major record deal. It doesn't mean shit. After you have lived on a tour bus, or had your ass kissed by a million drunks that think they know you, the thing that blows you away is when someone is truly moved by your music. When they know the words, when they relate to your emotions and love the moments you create with your band mates in that short period of time you were in the studio together creating what others feel, is MAGIC.

To play music, you have to love music. You have to be in awe when you meet the men and women that moved you so much as to dedicate your own life to the same thing as them. When I listen to any of the bands that are in that Hall, I hear the soundtrack of my life. I know that I would be a different person without the music that they created.
To get inducted means that you have done the same...
not sell records... but created music that has changed the
culture of the world in some way. Whether it's by making an
angry teenager feel release, or broken-hearted girl feel just a little bit more human, or scared the shit out of someone's parents when they saw their kids listening to you. To be able to turn down the opportunity to say thank you to those who took the time to listen, and en masse say it deserves to be right next to the people that literally saved my life as a teenager, would be an honor I would never pass up. Ask any musician if they would
do that if given the chance.
Some people do not deserve to be in a special group of
individuals who collectively are exponentially greater than
any of the individuals. A band is like a motorcycle club. An elite group of people that would kill for each other because of the experiences that they have shared together that makes their bond unbreakable no matter what. Axl Rose ain't no great singer...
but he is a legendary frontman that leads a group of men, and together they made magic. He doesn't deserve to have the
honor of induction because he has no reverence for
any of the above."
-Ron Young,
4.11.12
Posted by Fast Film at 6:21 PM

As are all, dear Jimmy, hence their published appearance here. It's hard to phrase this without courting litigation, but many musicians and others in the know think that Mr. Rose's statement is another in a long line of same for a possibly disgruntled member of a band to slight his former friends.

The original lineup of this band remains incredibly beloved in the public eye: perhaps his refusal even to tread on the same stage again with them is reactive to same (armchair psychology-wise!)

It can't be for the band being fuck-ups: at one time or another there was plentiful media evidence that all were, as youth is wont. We move on: one G N'R went back to college and since has written a textbook, well reviewed in Bloomberg, of avoiding finance pitfalls for the nouveau rich in the music biz, starting an investment frim to put money where their mouths are.

I myself am happy when friends or certain colleagues are honored or get their due, and the former would reciprocate being happy for any accolades to me.

I know it's hard to correlate the necessary attitudinal coolness of "it's only rock and roll" to the realities of music business, commerce and insider cronyism. But even though these guys now are rich as Croesus, I cheer the original Guns N'Roses lineup for getting their props.

Their first LP/cd was one hell of a great release, and, to annex Ron's and others' phrasing, "the soundtrack of my 1980s." Plus, once upon a time, they were fellow outsiders too...

Great words from the heart Ron! Couldn't agree more! Thanks for bringing this to our attention Heather!
-Tripp Smythe