THE UNLUCKIEST PEOPLE EVER IN ROCK 'N' ROLL 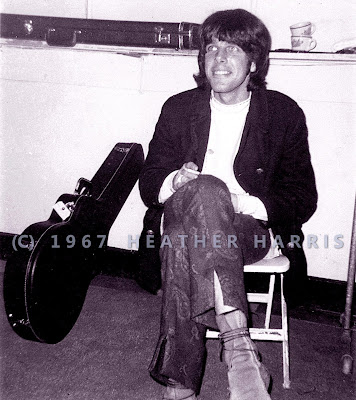 "The Unluckiest People Ever in Rock 'n' Roll" is a piece from many years ago, but pertinent. Update 2016 disclaimer: the Stooges were inducted into the Rock and Roll Hall of Fame in 2010, and Chainsaw triumphantly toured Europe circa 2003 in a hitherto unanticipated reunion demanded by an Italian record label. There have been several tribute albums and numerous compilations of the band on topic herein and the gentleman pictured above frequently performs with his talented daughter Arwen Lewis. Other than winning second place in the 2015 L.A. Press Club awards for my photos in Donna Balancia's review of James Williamson of Iggy and the Stooges' solo gig (LINK,) I still am waiting....

Let's talk about bad luck in the music business. Whom are its greatest exemplars? Could it be The Stooges, the Detroit hooligans fronted by Iggy with heroic guitar squawking by Ron Asheton and James Williamson in the late 60s and '70s that changed the entirety of all rock music forever? In their time they turned prog/evolving studio complexity and singer-songwriter mellowmush MOR on its ass and struck out as the progenitors of punk, grunge, and all performance art onstage in music. But in the band's lifetime they couldn't get arrested. Wait, they did tend to get arrested. That, hard drugs, neuropsychiatric ward institutionalization, and a hunka hunka bad luck. They aren't the winners though.

Could it be Chainsaw, the band whose lead singer Mr. Twister (with whom This Writer later united) pioneered proto-glam punk rock before the Sex Pistols hit the USA running? Mr. Twister complains that it's as no good being before your time as it is to be after your time, since actual instigators can get lost in the hindsight, as Chainsaw did. Could it be This Writer herself, whose 40 years of phenomenally arty music photojournalism from Buffalo Springfield to The Red Hot Chili Peppers is surrounded by some Cone Of Invisibility that always threatens quasi-attrition after the four decades of Trying Really Really Hard?

Could it be the aforementioned Buffalo Springfield, whom everyone agrees were the best live American high-energy rock band of the 1960s, what with their front lineup of three singer/guitarist-songwriters, two of whom are still wailing away in their dotage as Neil Young and Stephen Stills? And their technical musical brilliance allied with burgeoning eclecticism before rock critics deigned to attach that word to its heroes? And who imploded after two years and two and 1/2 glorious LPs, in a squalor of fights and arrests?

Nope. It was their compatriot best live American high-energy rock band of the 1960s, what with their front lineup of three singer/guitarist-songwriters, and their technical musical brilliance allied with burgeoning eclecticism etc. etc. who imploded after two years and two and a 1/2 glorious LPs, in a squalor of fights and arrests. It was Moby Grape, the unluckiest great band you've never heard or are only slightly aware of the former existence of same.

Two bar band/studio buddies of great musicianship hook up with a wondrous towheaded White Soul singer/bassist, a tall, moptop cute guy with a winsome voice and unbelievable Hollywood pedigree for a hard-rocker musician (his mum was Loretta Young,) and an unprolific but brilliant songwriter/complete lunatic. Meet Moby Grape. It's also the heyday of the summer of love 1960's, and they're all in San Francisco, hence their regard as the secret best band of the S.F. hippies era. Rather than subjugating the talents of its members, it lets 'em rip with alternating lead vocals, alternating songs' authorships, and brings 'em back together with five-part harmony and killer technique. Live. Where everybody else usually fell down on their beflowered peace and love faces.

They shred live. They write fantastic material. They look good for disparate hippies. The amalgam works, fame ensues. They are signed to the then biggest record company in America,  Columbia (CBS, now Sony) and record their classic album of 12 killer songs. And then . . . it all begins to circle down the toilet bowl so completely that few remember the name Moby Grape not in conjunction with a cautionary "the worst case scenario of what not to do in the music business."

In the middle of the "back to nature" hippie dismissal of hype and artifice, Columbia throws the biggest and most pretentious press party ever thrown to introduce the band to muso mandarins and the terminally hip. Purple orchids drop down from the ceiling. Regard drops away from offended compatriots. Then, on the pretext that the whole LP's material is so strong (true enough) the dunces at the company release all the songs as singles which was the way that the showcase songs were presented to the public at the time. Presented... one at a time, so the public could, dare I say, purchase something they heard and liked and then eventually purchase more? Like iPod mp3s? Wrong era. Result? Nothing gets notices amid the glut, and nothing happens to any of 'em.

Oh, except for the best of their best songs, "Omaha" written by the lunatic, which has the world's most unfortunate mix for the single: instead of their then inventive phasing of guitar feedback sounds ringing from side to side in the stereo mix, the dullards mixing the single fail to separate the sound, and the innovative intro sounds like a mistake of solid static before the song begins. What if that had happened to, say, Hendrix? And then, the LP was recalled from release when philistines finally noticed that the drummer was flipping the bird with his middle finger on the front cover photo.


So San Francisco's secret best live band/embarassed debutants soldier on with their great material, lineup, musicianship, etc. etc. Another LP is recorded. The cute guy's marriage breaks up, as presaged by his winsome ballads, but in comparison to his bandmates, he's getting off easy. The bad luck starts to rain down in floodwaters. The manager sues the band for its own name and wins. Two members are arrested for contributing to the delinquency of minors (The Man's name for underage groupies. A budding Almost Famous-type apparently snitched to her parents.) The lunatic drops his last tenuous hold on reality, no doubt an acid-soaked one at best, and attacks the drummer with an ax, both unhurt but the former ends up in NY's notorious Bellevue. Attrition. The towheaded White Soul Singer quits to join the Marines! Then becomes homeless. The lunatic becomes homeless, then a ward of the state. Then no band.

So what's left besides the bad rep? Not too many outside S.F., NYC and L.A. saw how great they were live. I sure did, as I dated the cute guy's cousin for two seconds, hence the unusual for me backstage pic (I was never an Almost Famous. I came in the front door with a camera and, later, a photo pass. I didn't come in the back door with the band.) There's clips on Youtube that hint at what they were, as most 60's acts were not filmed performing live, or were recorded so badly they wish they hadn't bothered. The one below is marred not only by cretinous blather but by cretinous mixing that ignores their three singers, and omits the cute guy. Luckily that's of whom my photo is. There's that fabulous first LP, fortunately available in CD and download re-release. And their/my story here.

you call that unlucky? shit ...I WAS born in Detroit Jan.13th 1953 an 8th grade dropout .played bass for the stooges in 1971 first gig got paid in heroin co-wrote songs that were never published till 2010 oh all my gear i had before i joined was stolen got paid 100.00 dumped in 1972 feeling unlucky after saving 4000.00 paid my way out to L.A. to start band & support/Ron A. for 1 year WROTE songs in NEW ORDER Never paid a penny totally dissed by pop and rest named mentioned a hall of fame induction just to rub it in... who would want to read any more of that shit but a masoch
ist