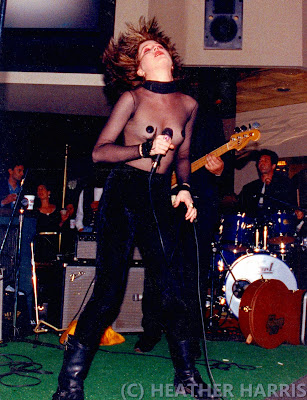 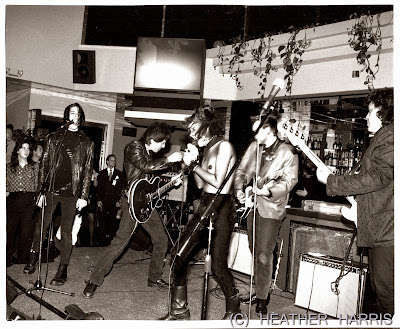 The Nymphs, signed for big bucks to Geffen when it mattered, were a New Jersey band relocated to Los Angeles in the early 1990s. They were compared to every hard rock category under the sun at the time -- Goth, punk, metal, grunge -- but to me they sounded like a female-fronted Roxy Music insofar as having a distinct band sound that quite differed from their peers, and for having as much dry humor as venomous bite in their songs which were primarily the work of singer Inger Lorre. The band derived its nomenclature from the post-larvae insect stage, not the semi-deity, nubile Greek maidens, although Lorre qualified.

For a while they were quite the P.R.-generators, probably in response to Geffen delaying virtually everything about their eponymous release. All the music media carried the story of Ms. Lorre pissing on the desk of company A&R person Tom Zutaut in front of him as visceral protest. She then revived the glam look of elaborate feather boas and showgirl headdresses onstage which would have been anathema on anyone else of that era. She had a quasi-ever-so-slightly flat but fierce melodic delivery that one might speculate was closely observed by Courtney Love, with occasional spoken word interludes of Biblical references. Then Inger became known for extreme tardiness to her own gigs, then for a (now acknowledged) heroin addiction alongside alcoholism. She was so talented, but it all got away from her.

I had looked forward to photographing The Nymphs (before their soon and inevitable implosion) as part of a multi-artist show heralding some sort of awards that Music Connection Magazine sponsored. Featured performers included Brian Wilson, Barbara Eden ("I Dream of Jeannie!") and lots more. This was one of the few occasions that got away from me as well, as somehow the one roll of film (of at least eight rolls needed to cover the whole show) with what was then one of the first post-Landy (his controversial shrink) appearances by Brian Wilson plus The Nymphs' single performed song disappeared from my camera bag. Mortified, I did however get the card of someone who had these shots and paid him in advance from my own pocket for same with his own promised accredation to fill in for what inexplicably was missing, since it was important to the assignment.

Fortunately for me a second chance at least to shoot Inger unfolded. For the awards' after-party there was a jam band with Frank Infante and Clem Burke of Blondie plus others upon whom we can't seem to agree nor remember. Inger had shed her feather boas for the see-through number depicted in my two photos above. She then begged, BEGGED, BEGGED the band to play "I Wanna Be Your Dog" by The Stooges, pleading with them worthy of James Brown's immortal "Please, Please, Please!" so that she could warble and wail her favorite Stooges song, which one gathers heretofore hadn't fit into their set plans. She sounded as obsessed as a rabid concert fan bellowing a favorite song request, for which I commend her. It's great to have someone else's music mean that much to someone even when that someone is a performer/songwriter herself.

The Nymphs went their separate ways soon, Inger eventually attaining successful to this day clean and sober-ness, and augmenting her music career by also becoming a successful fine art painter (see similar on Elastica's Justine Frischmann LINK) with many group shows. This makes sense, as her own quite excellent drawing of assorted modern-life demons and temptations circling down a whirlpool and/or toilet bowl adorned the cover of The Nymphs' debut release. Drummer Alex Kirst joined his guitarist brother Whitey in The Trolls, the solo band of Iggy Pop. But there can be no complete aggregate Nymph reunion: Alex Kirst was killed this last January, 1.13.11 by a hit and run driver in Cathedral City, California.


Vintage The Nymphs in dim lights but live!

NOTE: link directly back to http://fastfilm1.blogspot.com if all elements such as photo layouts or videos aren't here.
Posted by Fast Film at 5:27 PM

saw the nymphs numerous times....inger was a marvelous distraction from the mostly male fronted punk bands I would go see at places like Rajis etc back in the late 80s. Cheers to her sobriety...
I saw her a year or two back at Wacko on Sunset working the counter there...that's one retail job I guess I wouldnt mind!

Well-written piece, good to see Inger still playing out live, gotta get my ass down from the SoCal High Desert to see her gig someday!