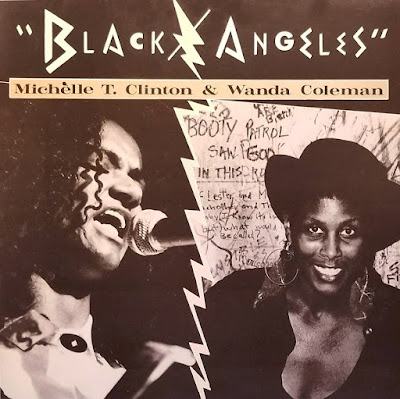 ↑ Art Direction by me for this Harvey Kubernik produced spoken word album, released in 1988 by New Alliance Records. I've always liked to mashup fonts for maximum effectiveness. The most thrilling part of this job for me? The chance to photograph Richard Berry, the actual songwriter of the immortal rock classic "Louie, Louie" flanked by the selfsame poets Wanda Coleman and Michelle T. Clinton, below ↓ 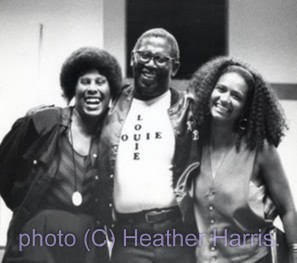 ↓ The first graphics job I did for Harbey Kubernik with his premiere spoken word compilation of L.A. poets album in 1982. Artists included Charles Bukowski, Wanda Coleman, Velvert Turner, Pleasant Gehman, Dave Alvin, Tequila Mockingbird, Richard Meltzer, Danny Sugarman, Chris D., Geza X, Joanna Spock Dean, Kari Krome, Danny Sugarman and about five dozen others. Harvey was the first  to discover, while pouring through contracts at MCA  Records, that just because a company has licensed the music of an artist, this didn't extend to spoken word performances. Whereupon he immediately started recording all sorts of actors and musicians for these compilations. Henry Rollins, Exene and others got the credit for slam poetry, but the progenitor was Harvey Kubernik. 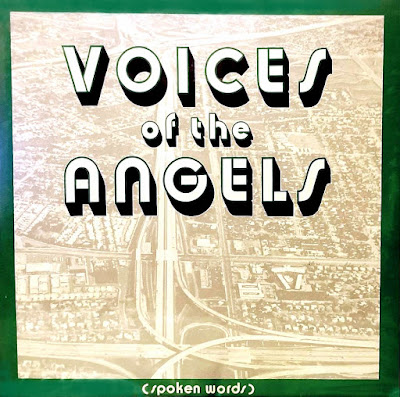 ↓ I was proud of this logo I designed for Harvey Kubernik's record company. 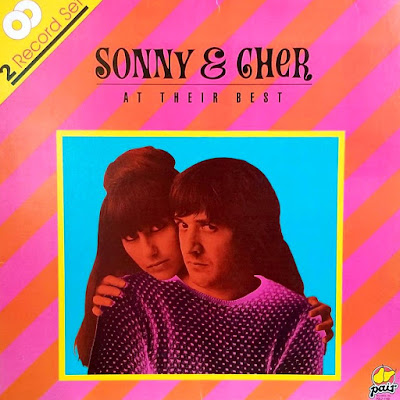 ↑ Art Direction by me, LP cover for 1986 compilation for Warner Special Products based on a single black and white pic, photographer unknown. Do you think it's bright enough?
Having black over polychrome was a surf-redolent graphic technique a la art director extraordinaire John Van Hamersveld:  it never was used in mid-1960s psychedelia, hence my contrarian application to make sure it was seen as a newer compilation. 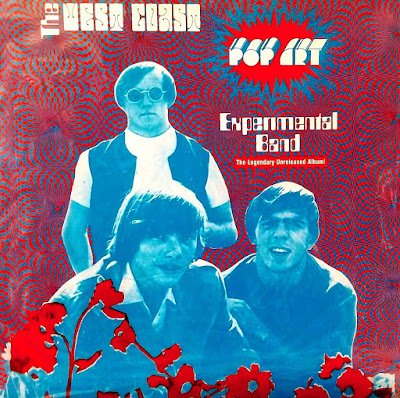 ↑ Art Direction by me. Another deliberately over the top retro LP cover by me with a single black and white pic as basis, probably mid-1980s. It was released by one of the West Coast Pop Art Experimental Band to look like a bootleg, but it wasn't. The imprecise printing registration of the flowers deliberately emulated a Warhol-ian "Pop Art" technique, one even used today by fine artist Niagara. 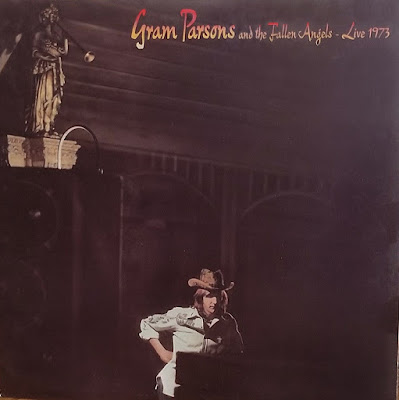 ↑ Art Direction by me for 1982 LP cover, the first live Gram Parsons and Emmylou Harris music sanctioned by the estate. Fittingly, more respectful tone. The pic, reputedly by a girlfriend of a Rolling Stone, was in bad shape but restored by the Charles Wild Studio, and I did the airbrushing for the font.

I was working with some of the same people involved when i art-directed Sid Griffin's biography Gram Parsons: A Music Biography. It was important to them to have quality images that were rare, that Gram's public wouldn't have seen before. That's why we had L.A.'s best retouchers restore this battered photo for the album cover, and why we had a screen capture from a rare Burritos video shot in
Marina Del Rey for the book cover.↓ 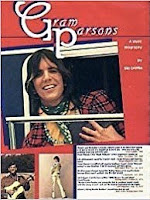 Having a genuine wooden angel hovering over this sensitive but doomed singer/songwriter was the perfect image for the Fallen Angels band. We didn't have to do the oldskool pre-digital version of Photoshop of masking something in and airbrushing the join lines out, this is the way the photo was shot. It's just that the only extant print was beat up and too rectangular, hence the retouching.
Posted by Fast Film at 12:22 PM No comments: 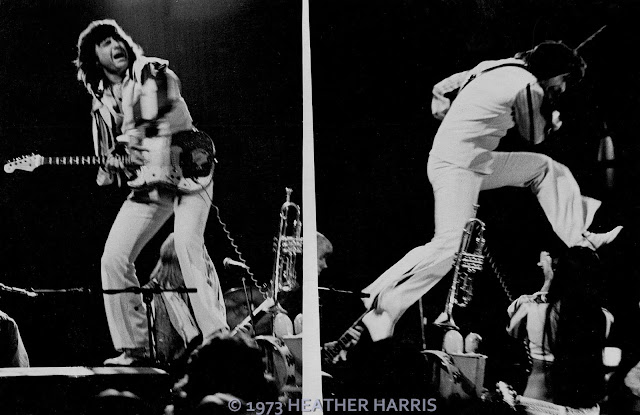 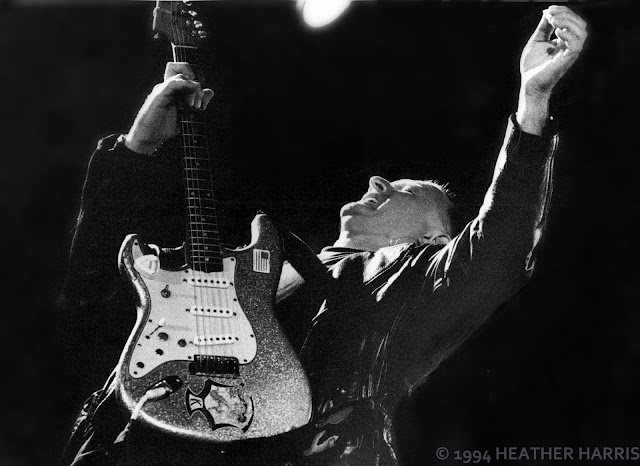 Rest in peace Dick Dale, King of the Surf Guitar, influencer of Eddie Van Halen, Stevie Ray Vaughn and Jimi Hendrix (like Dale, also a southpaw with a Fender Stratocaster.) He also inspired Quentin Tarantino to include his "Misirlou" in the opening credits of Pulp Fiction, a great financial boon to Dale.

My two photos of Dick Dale twenty years apart: The First Surf Revival, Hollywood Palladium, 1973 appearing with The Challengers, the Surf Punks and others. Yes, he leapt on top of the piano; secondly, staying with his beach roots, playing at the Santa Monica Pier, 1994.

My friend Donna Balancia, editor of "California Rocker," first broke the sad story of his passing in same, according to today's online "Rolling Stone," which then was confirmed by his bassist Sam Bolle. Dale, 81, had suffered from many serious ailments in his later years, despite his active touring. In his youth he was an accomplished surfer, a real one, not a gremmie... 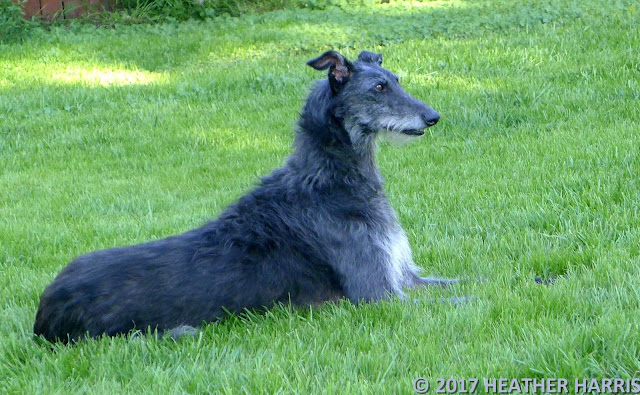 Eroica, the gorgeous Scottish Deerhound who was our playdate regular visitor owned by Paul and Mary Smith and who once body-slammed an actual deer in her native Canada, did not make it through her serious illness and passed away this morning. It was a fluke variant of a disease which destroyed organs before it even presented any other symptoms that could have been treated.

Just like there are exceptional people, Eroica was the quintessential exceptional Deerhound. In a breed known for kindness, playfulness, beauty and absolute devotion, she surpassed all expectations of these traits and immediately stood out to all as a one in a million individual. I feel like I've just lost a close friend and am crying while I write this. 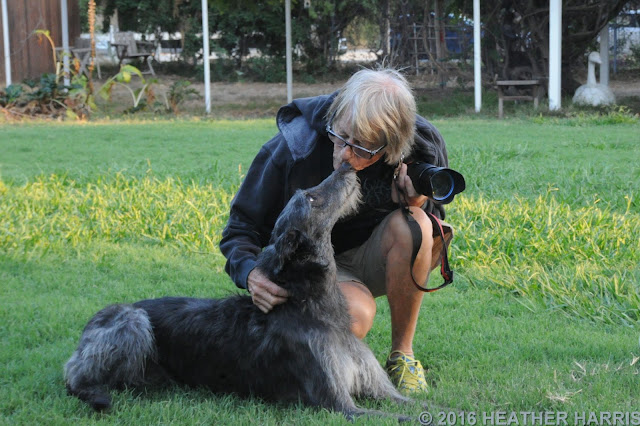 Offered above is a photo of my better half Mr. Twister and Eroica, and below, this song which recently was used in the tv series "Trust" to signify a much loved, playful, exceptional soulmate who also died too young, because I have no words... 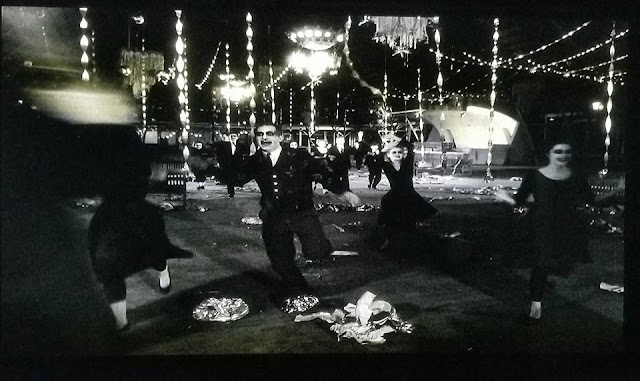 Screen captures from Carnival of Souls, a 1962 independent horror movie which cost $33,000 to make and ended up influencing George Romero's Night of the Living Dead, 1968. Above, the undead au carnival. Director Herk Harvey made industrial and educational films in Kansas, but had an advanced visual eye. This was his only feature film, which has become an acclaimed cult favorite, despite Harvey experiencing every single artist's worst nightmare happening during its production... 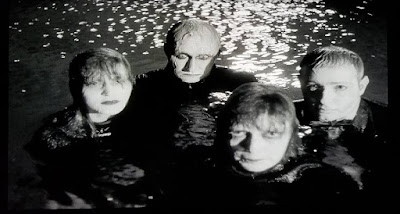 The image above was supposed to be the last shot of a long climactic sequence of the undead slowly and eerily rising from the waters of a half dried up lake next to an abandoned amusement park. But the development lab terminally wrecked that reel of film. The budget did not permit a re-shoot, even though the initial promo art for the film already featured an artist's concept of it. 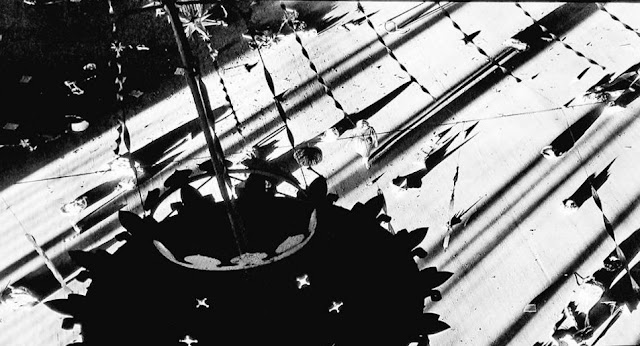 Instead, the film is remembered for its myriad, arty visual touches, for being one of the few horror films of the era besides Hitchcock's Psycho for basing the plot on a credible female protagonist, and for being a successfully realized high concept of a commercial director who never again made another feature... 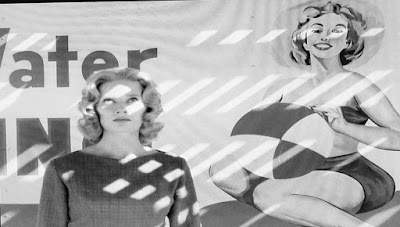 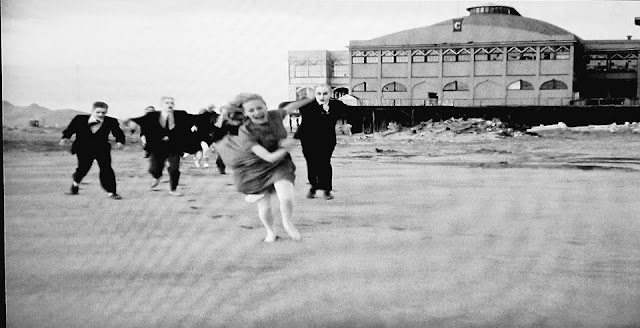