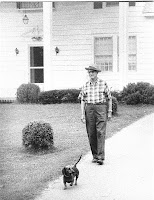 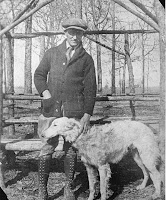 By his own admission, my maternal grandfather procrastinated the inevitable for over a century, living to be 104, robustly healthy and intellectually curious about the present as well as his past until his final 6 months. Interesting guy for a "farmer:" he was told by his small-town Southern high school that he wasn't college material so he made it a point immediately to get into Harvard where he drew cartoons for the Harvard Lampoon, cavorted with Kermit Roosevelt plus Joe Kennedy Sr. and defended with fisticuffs the Gakwar of Boroda (a princeling from India) from racist students there who were about to beat him up, admonishing them "This is a Harvard student, just like you and me."

Not at all wealthy, he traveled the world by working for passage on cattle boats (the pre-refrigeration export era,) was thrown out of England by Scotland Yard, joined a German dueling club with the pre-WW I student princes, made his way over to China in the 1900's, tried opium (recalling to have danced the ballet on top of the clouds, later marveling when he could see those cloud tops once again after commercial air travel was invented and became widespread,) got a tattoo there, and saw "the death of 1,000 cuts" in person in India. His descriptions of the starving masses clambering aboard trains in the Far East conjured the frenzied opening scenes of classic film "Lost Horizons."

Harvard architecture graduate, he then worked for Stanford White's firm in Manhattan and knew John Reed ("10 Days that Shook the World") so I took him to see the "Ragtime" and "Reds" movies about his cronies one summer. He designed part of the Lincoln Memorial in Washington DC. He watched Charlie Chaplin film his short comedies on Santa Monica pier while in California. He married the most daring socialite girl in Memphis Tenn., the first to bob her hair and go barnstorming in biplanes. He then settled down to farm on land that was a small inheritance, expanded same and became very successful with such innovations as importing soybeans to the South when he remembered this crop from the Egypt of the 1920's. He imported the first VW Beetle and Russian Wolfhound (Borzoi) to the South. He and my grandmother were generous, nonjudgmental people. All his family and employees rightfully thought the world of them.

My immediate family chose to present such toxicity to yours truly throughout childhood that I really gravitated to the few allies in it like him even if he lived 2,000 miles away. I think I received my art talent, my (somewhat closeted) adventurousness and love of animals from him. (I certainly became interested in owning sighthounds from his old photos like the one above: that's a Borzoi he imported from Czarist Russia by way of Chicago.) I also "inherited" his open-mindedness --I can be good friends with folks with whom I disagree as long as they are likewise tolerant of me, because it's all about seeing what's out there and codifying the info. Example of same: he was as old-fashioned religious as one would expect a Southerner born in the 1880's to have been, yet fervently believed in science and evolution joking "The bible said God created the earth in seven days, but it doesn't really say how long those days were!"

It's sort of a tightrope walk to keep his memory as dignified as it deserves to be while recounting such tales of his adventurous youth. I retain the same professional qualms in writing about some of my contemporary musician clients, yet remain fascinated with how people such as them attain the balance they desire in their lives. I tape recorded many of his tales as he remained an excellent raconteur. He outlived my grandmother by 25 years, and died on my birthday.

What a beautiful story. I think you also got your mentoring skills and generosity of spirt from them as well. You have been so kind and generous to me and I love you very much Heather!

All I can say is that I cried in a really good way for someone who deserves a good cry for. Ummmm, that's you,Heather~ as well as for your grandfather.

Very interesting. I think traveling the world when he did, before there were cell phones and American fast food everywhere, must have taken a great deal more pluck than now. Now let's hear about the toxicity.

Pluck indeed, shoveling cow manure for boat steerage passage to Europe and Asia, particularly when he grew up in a town so small that it's still not on any U.S. map except the Pentagon one.

No toxicity while they are still amongst the living. That would be playing their own game.

Heather, this essay about your grandfather is just marvelous--a wonderful story very well told.
I've moved it to My Documents so
I can access it a little more easily for re-reading.

A book...you need to write a book,
have it made into a movie, and then
you can gethehell out of L.A.

Thanks muchly for sharing your
grandfather with the rest of us.

Thank you Roberta (who is one of the fortunate few who can assess what a great specimen of Borzoi the 1900's photo features. If only present breed more resembled "Vodka" the Borzoi nowadays!) The lack of detail on my personal dogs throughout the years on a public forum like this underscores at what you've hinted, that I cannot remain in L.A. (which has passed draconian laws outlawing my harmless hobby of 35-years, for those not in the loop.)

"The book" isn't a movie, although aspects of it resemble the exaggerated villainies of a soap opera. It would be a three-volume, hagiographic (no Kimmer, not about me as a hag) body of work of my shots of internationally known people in the music biz over 40 years, a volume of locals in same, since I consider that important insofar as many a local I photographed has crossed over into the first category, and a (slim) one of photo essays of a personal nature like this one. Whatever publishers could then market same as 3-volume opus, or break it up into separate ones for easier sales.

I'm not a prolific, facile writer like, say, John Mendel(s)sohn, Mick Farren, and you: much heavy-lifting is required to extricate my words from the mundane. (I understand Louise Brooks taught herself prose style in the same fashion.) Perhaps by the time all is annotated, I won't have the roadblock of my own choosing not to impugn the living. (I later found out Louise Brooks had the same problem as well.)

Or... they could outlive me: I've had more frequent and far closer calls than they've ever had. (Somewhere in my conscience I indulge a soft spot for Yusef Islam's [Cat Stevens to the infidel] song "But I Might Die Tonight.")

P.S. the "Guns N'Roses, Misguided, and Why I Hate Christmas" post earlier in the blogs would be a crossover from Vol. 2 to Vol. 3.

P.P.S. For others' benefit, I should point out that Roberta (do you have a blog here? If so, what?) is a full-time writer and so emotionally astute: she offered me the best words of condolence when my 3-year-old Champion Deerhound died suddenly after a steep, 8-day decline that came from nowhere. She wrote, and I get teary just recounting this: "You got to hold onto a star, and then the star floated away back up to the heavens. Most people never even touch a star in their lifetimes."

Heather, you have persuaded me...I
need a blog of my own. I just have
to figure out how to set it up and
maintain. Before that, I should
switch my computer activities to the not-new but better computer a
friend gave me.

Otherwise,yes, I do recognize the
quality of your grandfather's Borzoi. That dog one can imagine
racing with the wind over the
Russian steppes. The two two-year-old Borzoi I see in the park sometimes cannot keep up with my
six-year-old Irish wolfhound.

As for your harmless hobby and
what Los Angeles has done to suppress it, it just boggles the
mind...the nation is collapsing
from a general bankruptcy and
Los Angeles (and many other places)
can think of no better response than to make it a crime not to
spay your deerhound.

Everyone reading this: Hold onto
the stars in your lives as long as
you can. There are an awful lot of
people out there who want to extinguish all of them.