ONCE UPON A TIME AT ONONDARKA RIDING SCHOOL... 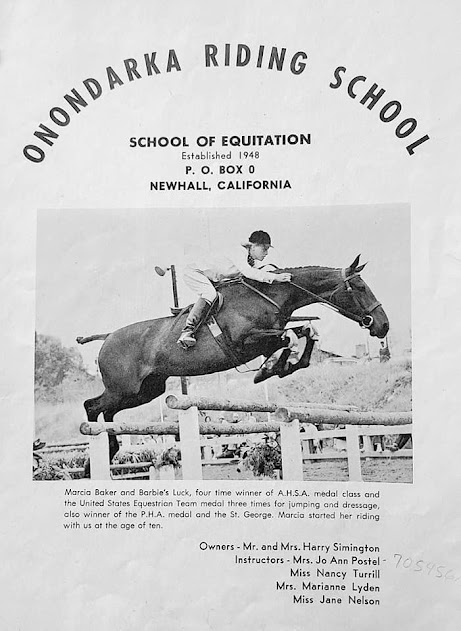 Once upon a time in 1960, this was the place in the L.A. basin where kids went to learn English horseback riding if one didn't want to deal with that harsh fellow at Flintridge or sit Saddle Seat at Portuguese Bend, Palos Verdes. Everyone else wanted to be a cowboy. I sure didn't, so my begging paid off and finally my parents drove me all the way out there. It was so long ago that there wasn't a 405 freeway: one went thirty miles along Sepulveda Blvd. from Los Angeles to Newhall, then followed now lost highways to the riding stable. The 1960 brochure pictured herein even features this now  unfamiliar map. 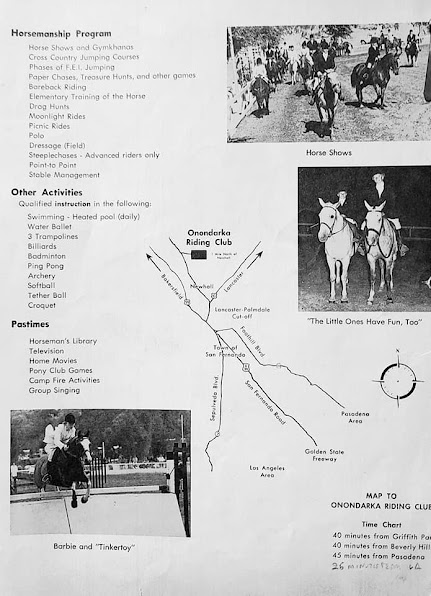 ALERT- let me explain what "drag hunts" (second pic) used to mean, nothing to do with Ru Paul! In formal drag hunts like Valley Hunt Club a lone rider would drag the scent of fox or coyote (usually its urine, came in a bottle), hunting hounds would follow the scent all over the land, and riders would follow the hounds. An arbitrary end was chosen. I never experienced Onondarka's drag hunts, but since they kept no foxhounds, I presume a lone rider with a huge head start left markers for the other riders to find over a large hunt field. Activities like this were more prevalent in East Coast Pony Clubs. English riding styles, as I wrote were still in the distinct minority. 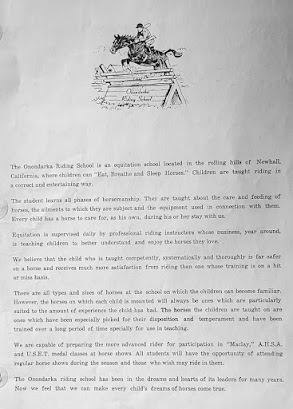 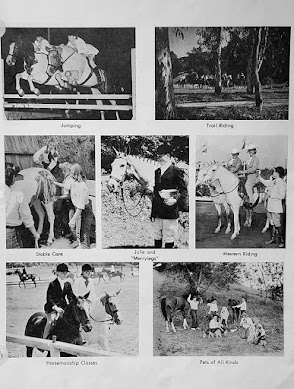 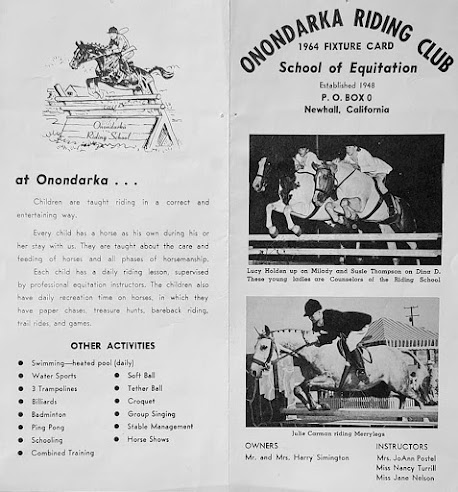 For two years I enjoyed a weekly group lesson at this heavenly place (my sole raison d'etre in my dysfunctional family environs.) The horse camp was for families more well-heeled than mine, despite the insane pre-inflation prices listed. Onondarka's star teen rider when I was there was future Dressage Olympian ☆☆☆Hilda Gurney ☆☆☆ 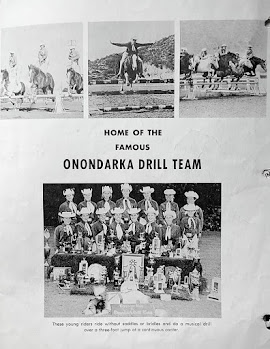 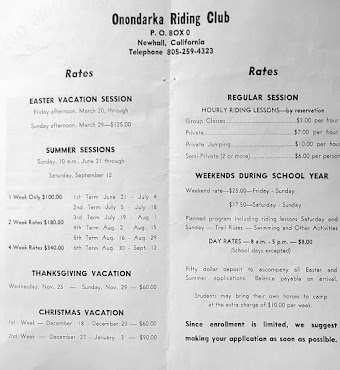 I wish to reiterate to my blog friends that I had no genuine riding talent, just persistence over the years. That and the love of animals, which the domesticated ones pick up on, were my sole equestrian safeguards. Onondarka (said to be a Native American vernacular for Place of Horses) had effective and humane methods of instructing young horse-crazy kids, so effective that they served me well thirty years later when I could afford to ride under my own steam. Onondarka Riding School eventually was subdivided and paved over, but at least its instructors founded another English equestrian place a further forty miles away called Foxfield Riding School in Westlake Village, around the western-most end of the San Fernando Valley. 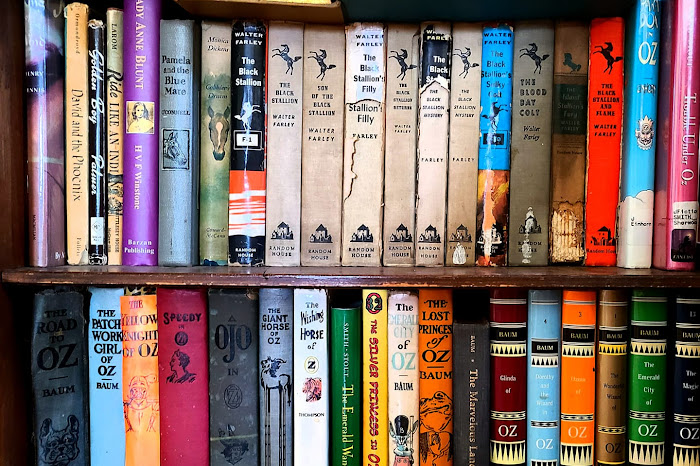 Private reserve of my childhood books, all, dare I say, dog-eared and thoroughly re-read. Despite the Arabian peninsula and deserted island fantasies of the first and second books, the Walter Farley 'Black Stallion' series were based largely upon, believe it or not, modern Thoroughbred and Harness racing of the author's era. One gets a hint of this direction in the ending of the fabulous 1979 "art movie for children," The Black Stallion, directed by Carroll Ballard with visuals courtesy of the greatest cinematographer in the entire film business, Caleb Deschanel.

Besides the ancient Oz books I inherited, the newer ones also have an equine theme. For instance, "The Silver Princess of Oz" featured the title character's sidekick steed (pictured below.) "Ojo in Oz" and "The Emerald Wand" were both plot-heavy with unicorns.

Half the alchemy of the Oz series was its illustrations. Although the writing became public domain, no reprints succeed except those with the original or with the best possible retro illustrations which also encapsulate the magic. Most older titles use its initial publication art by John R. Neil, a contemporary of original Oz authors L. Frank Baum and Ruth Plumly Thompson.

All illustrations pictured here are by Neil with the exception of the third one, cladistically placed with the unicorns, fair usage © by William Stout, an always amazing contemporary artist also justly celebrated for his paleontology and fantasy paintings. 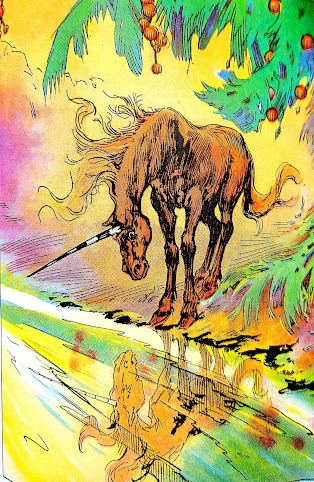 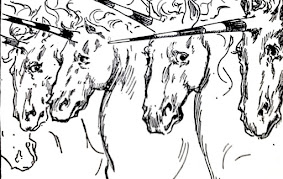 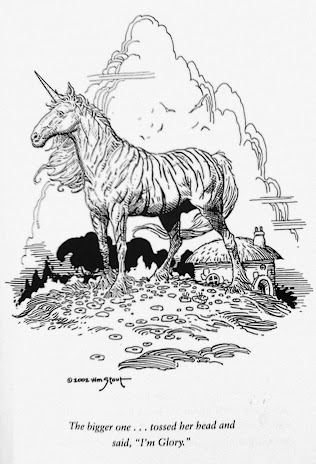 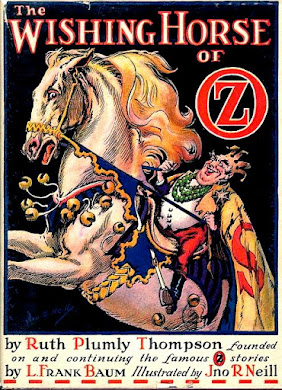 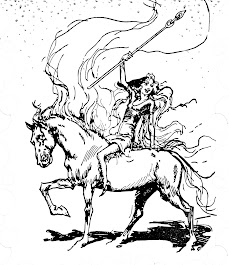 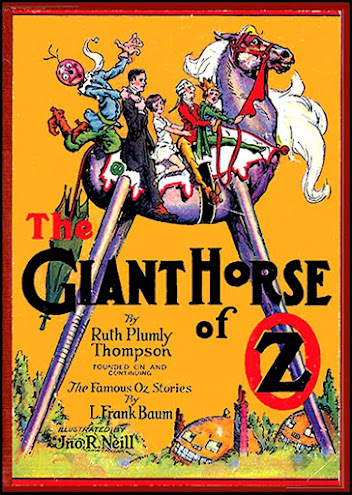