THE HANGMEN, LIVE with THE ZEROS 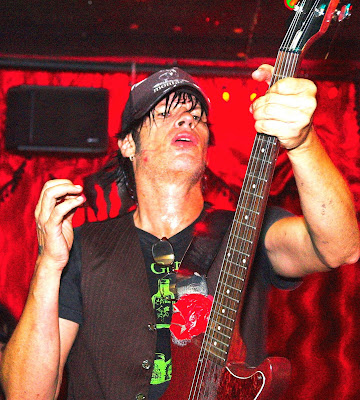 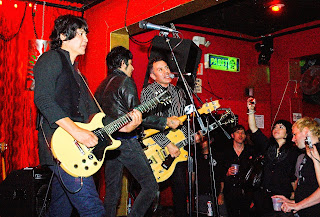 photos (C) 2009 Heather Harris. The Hangmen and The Zeros live at Alex Bar, Long Beach CA, 8/21/09
Once upon a time (sub-set A) The Stooges, the Stones, the Dead Boys, Gun Club and the NY Dolls loved the music of and based their initial songwriting respectively upon, amongst others, (sub-set B) The Stones, Chuck Berry, Alice Cooper, Howling Wolf and Shadow Morton. Because sub-set A innately were all topflight artists, they soon sped past sub-set B covers and borrowings to become the distinctive musicians we now know them to be or have been. But everyone comes from somewhere. It's not insulting to to have recognizable influences.
Those influences of The Hangmen are the entirety of sub-set A, a pretty cool melange to be sure. Singer/songwriter/guitarist/vocalist Bryan Small is also cursed with catchiness, which makes his songs sieved through subset A pretty damn fun to hear as well as being bluesy and rockin'. His Hangmen and he have stayed, with variations, on the scene for over twenty years but remain admirably fresh. It was a real treat to see and photograph them performing with the recently reunited (and terrific) Zeros, truly celebratory punks featuring their original lineup, inclusive of Javier Escovedo and Robert "El Vez!" Lopez.
Trivia: I featured The Zeros 30 years ago in my book "Punk Rock & Roll" (the first published on the subject in the U.S.); and attesting to his personal as well as musical appeal, you can see lipstick traces on Hangman Bryan's face in my photo above. 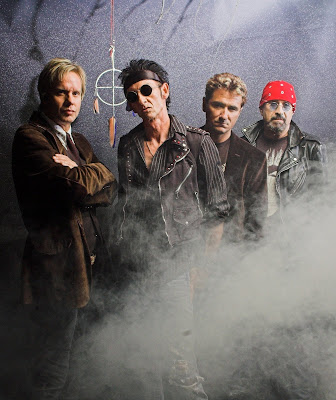 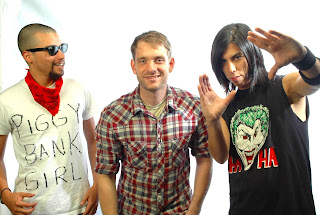 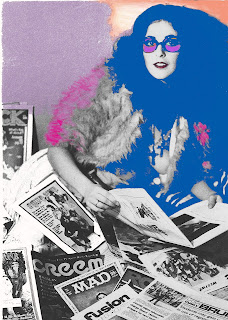 What are everyone's favorite extinct periodicals within one's own reading lifetime? Mine are, in no particular order:
1. Coast FM and Fine Arts ('60's/'70's entertainment media all rounder)
2. Creem (the only mag)
3. Take One (mid to late '60's film magazine- Anne Rice and Phil Ochs once wrote for it!)
4. Neon (excellent '90's Brit mag, like MOJO or Q but for movies)
5. Star (groupie/teensploitation) During more troubled times, I had to sell my copy with Sable Starr and Lori Mattix explaining how to "date" rockstars.
6. Film Threat (GENUINELY alternative film reviewing)
7. Entertainment World (published my first non-student-newsmedia piece.)
8. The Journal of Irreproducable Results (sample: an article calculated over 2,000 different English spellings of Moammar Khadaffi.)
8. National Lampoon, the P.J. O'Rourke/Michael O'Donohue/Doug Kinney years
9. Rags (Rolling Stone-sponsored, fashion commentary and photos, early 1970's)
10.All the lost British music trades...