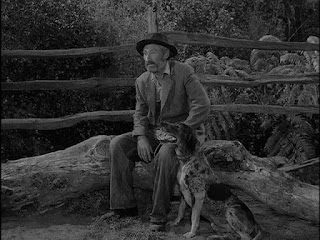 fair use screen capture from The Twilight Zone episode "The Hunt"

Let me summarize an incredibly poignant Twilight Zone episode written by a screenwriter who passed away two years ago, called "The Hunt." A rural gentleman and his dog encounter a gatekeeper alongside the road, and come to realize his dog and he have passed away. The gatekeeper welcomes the man but says his dog can't come in, there's a separate place for dogs. The alternative is to wander eternity with his dog outside the gates, which the man chooses, and ambles off with his dog. Soon he comes upon another gatekeeper who joyously welcomes them both inside. Who was that who said my dog couldn't join me, asks the man. The answer: that was Hell.

R.I.P. Earl Hamner Jr., who hopefully met up with his past dogs...

*http://www.tampabay.com/news/obituaries/the-real-life-john-boy-earl-hamner-jr-who-created-the-waltons-dies-at-age/2270739
Posted by Fast Film at 6:29 PM No comments: 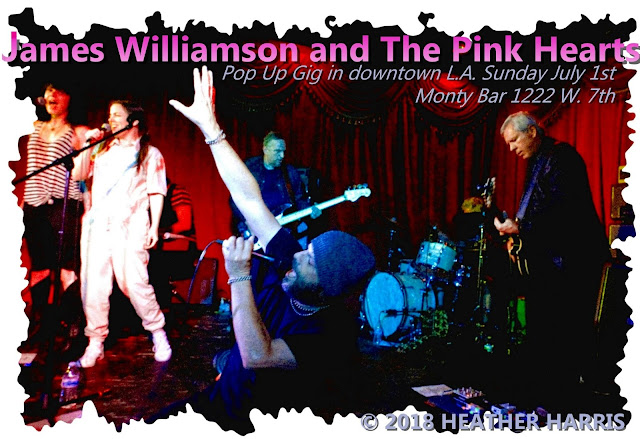 July 1, 2018, another change of venue for live show by Rock and Roll Hall of Fame Stooges' guitarist JAMES WILLIAMSON and the band featured on his latest solo album of all new original material "Behind The Shade," featuring vocalists Frank Meyer of the Street Walkin' Cheetahs and Petra Haden of her all a capella "The Who Sell Out," plus many of his Re-Licked live gig musicians. New venue is the Monty Bar, downtown Los Angeles,
1222 W. 7th St.