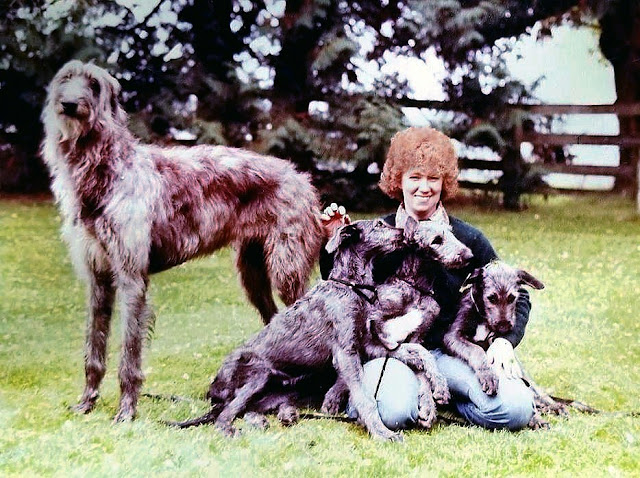 Pictured above with her well nigh perfect Scottish Deerhound multiple Best in Show  Champion Rayne An Gael and 3 of her puppies that she bred (daddy was Ch. Benachie's Bobcat); below showing my Scottish Deerhound Karis: Lea Bishop. Little blurbs don't sum up such a life so well lived. She was a survivor, as both her parents died young. She was a self-taught expert on fine hounds and showing them. She was an expert seamstress at stage costuming, which was how I met her at UCLA with Kirk Henry's, John Mendelssohn's, Ralph Oswald's and my future better half Mr. Twister's band Christopher Milk (see LINK*). She became my sighthound mentor, unusual as we both were relatively young to specialize in purebred dogs. 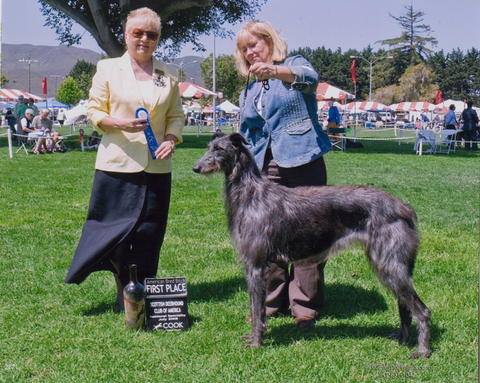 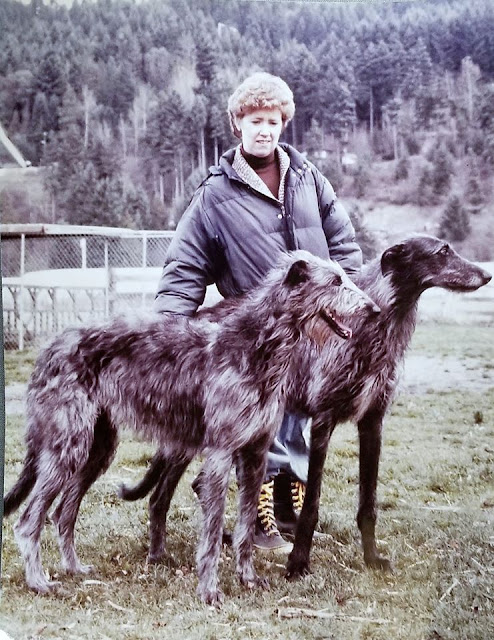 ↑ photo © Kurt Ingham. Lea and two of her gorgeous Merridale Farm Scottish Deerhounds in Washington state, in some long ago decade. Mr. Twister and I visited to wallow in the puppies of Rayne, a memorable trip...

She was a fine, self-taught travel photographer who exhibited often. She used her initial relocation to learn a new vocation, and climbed up the ladder until she was the head of the entire Senior Center for which she first worked in the Seattle area. She bought sports cars to drive around in Europe then imported to sell here in the U.S. to finance selfsame trip.

She specialized in showing, breeding and enjoying Borzois, then Scottish Deerhounds where her Merridale Farm kennels enjoyed its most rousing success, then Petit Basset Griffon Vendèen ("PBGVs," yes, so nicknamed after CBGBs) then Italian Spinones, all lovely, fuzzy hounds. Why did she quit Deerhounds, often called "the most perfect breed under Heaven" as by Sir Walter Scott?  Because, dear readers, Deerhounds are also called "the heartbreak breed," but that's a whole other story although a hint can be found here LINK**... 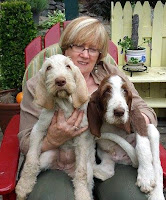 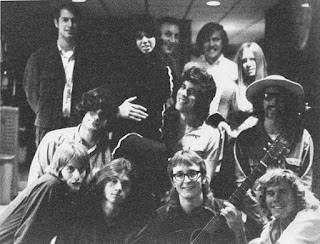 She had a wicked sense of humor, once suggesting naming her puppies "the terrorist litter," which prompted me to call my first Arabian horse the apropos Muslim sobriquet Idi Amin, since most would hear "Idi" as "Edie."  After the breakup of her first marriage she visited a counselor with whom she told me she felt at ease only after he sang "People Are Strange" by The Doors to her at her insistence. On one visit, the comedy Best in Show hadn't been released to her area yet so we enjoyed Almost Famous together at her local theatre, guffawing loudly at the insider rock and roll jokes to an otherwise silent audience.

Vintage Jane Asher look for Van Nuys High School portrait (which is in our current neighborhood but much changed since then. For instance, no natural redheads like Lea matriculate whatsoever...)

I always had a great time whenever we got together. The photo at the very top represents such a happy memory of Twister's and my visit to her Deerhound-filled farm of that era.
She sent thrilling accounts of her world travels via Christmas cards with her second husband Emerson. She gave me a fine, vintage Landseer etching of a Deerhound when I had cancer in 1984. After our mutual dog showing friend, acclaimed Deerhound breeder Jana Brinlee informed me how really ill Lea was at this stage of her own cancer, I tried calling all the phone numbers I had for Lea. I never got through. Now I never will. Rest in peace, Lea...

Two of Lea Bishop's travel photos, of Italy and Thailand.

Below, a dog show in the 1970s, Lea with her Borzoi and our friend Debbie Reinberg. 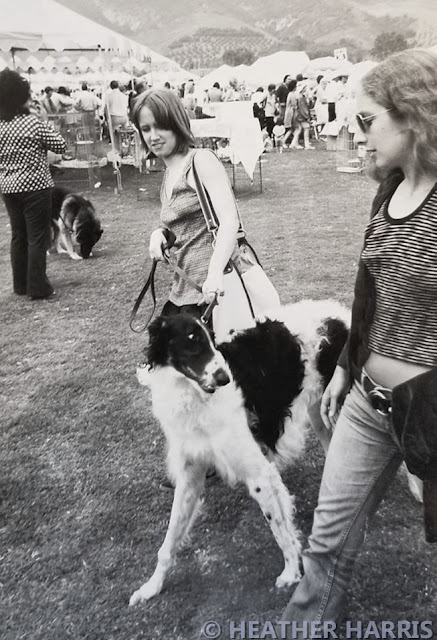