"It seems to me that you reached for a star,
caught it for a little while,
then it floated back up and away.
Yet it's not given to everyone, not most people in fact,
to ever hold a star, even for a little while."
from writer Roberta Pliner in reference to Drusilla

Domestic animals can be bred and trained to any activity that comes naturally to them, but to excel in competition of same they actually have to want it as well. This isn't anthropomorphism, it's observation from any human who's ever worked with and loved animals that still have their natural instincts intact. Thoroughbred racehorses and sighthounds (the greyhound-type dogs) certainly retain intact instincts for speed, the former to race away from predators, and the latter to chase the prey. Both enjoy the act of full speed running, as both these species do it for fun among themselves as well as when called for.

Above, Secretariat
Secretariat was a genetic fluke of a horse whose planned breeding, perfect athlete's conformation that gave him an abnormally long running stride, effective training, good health and luck in having compatible owners made him a superhorse. He naturally enjoyed running so much that competitors were outdistanced without mercy, because the horse wanted to. He also wanted to win the third race of the Triple Crown by 31 lengths, a feat unequaled in American classic racing. His owner was a woman of great personal strength and conviction as well as wealth, so altogether this made an entertaining movie.

And so I was enjoying the Disney film Secretariat immensely until the groom whispered "Come home safe, Red" to the horse just before the start of that race. Then it all came flooding back.

Once upon a time I had my own superstar running animal, a Scottish Deerhound (one of the sighthound breeds) who competed in lure coursing, a simulation of hunting with the dogs chasing flapping, plastic bags (nicknamed "the bunny") on strings tugged by machines around a huge field in zigzags. The sighthounds LOVE to run and chase these, as they've been bred for 45mph speed and "prey drive" (the instinct to chase moving things) for several thousand years: the ancient Egyptians initially bred them.

And she LOVED to run and chase, often zooming around our back yard all by herself in pure joy. I could tell she'd take to coursing, but she was a small Deerhound, and the big males initially knocked her over at every start of the chases. Once I figured out, like Secretariat's trainer, that if I held her back at the start for the boys to leap ahead, she inevitably would overtake all competition and win these races, often winning the whole match against every sighthound breed there (an achievement called Best in Field.) Video of Drusilla in competition below:
By the time she was three years old, she had attained the titles "Multiple Best in Field, Field Champion, Senior Courser," rare for so young a hound. Each time at the start of a race over massive, rough fields hopefully bereft of gopher holes or debris, we competitors all would whisper to our dogs, like Secretariat's groom, "Come back safe" (far more important than winning.) But unlike Secretariat, there was to be no happy ending for her. I wrote the following forensic (and emotional) examination of her sudden death two days afterwards for the Scottish Deerhound owners' magazine:

Drusilla's neck and back pain came suddenly a week ago last Wed., she was at the vets Thurs., consultation Fri., x-rays inconclusive, dog in same pain, changed pain meds from torbutrol to tramadol and robaxin, sent to a 24-hour emergency care Sat. for IV since not eating or drinking, dog to neurologist specialist Monday (long 100 mile trip), stayed overnight for IV and MRI and spinal tap Tues., specialist ruled out osteosarcoma, disc and tumor problems, specified blood work for possible fungal disease, parasitic diseases or toxoplasma since 'foamy macrophages' vs. mycocytes indicated same, also dog was a courser out in the wild fields. Blood work done on Thurs., sent out, and dog stayed at vet for IV fluids since has stopped eating entirely and was difficult to force-feed with the pain, but does drink. Med changed to 1 and 1/2 20mg. Prednisone twice a day. Stopped robaxin since ineffective. Gave Pepcid to prevent ulcers from not eating. Did not give new med Mirtzapine for appetite stimulation since I was going to do that the next morning in order to monitor her, but Thurs. night she lost use of her legs, was panting, breathing shallowly and distressed.

We took her back to the vet Friday morning, had the specialist/neurologist confer by phone with the vets there, dismiss what wasn't applicable, say the the remaining treatment was a single-digit longshot, and that through these tests, we had eliminated the diseases that were treatable while honing in on brain damage, which is not treatable; meanwhile she was slipping (twitching, no mobility.) Through the process of elimination of the infectious agents, it must have been a degenerative brain disease that was not the ones mentioned, first affecting her neck and spine (myelopathy), then everything else. No treatment, no cure, and in that one week an unbelievably rapid decline.

That's the clinical "forensic" part that our Deerhound community wants to hear to file for future reference and early diagnosis of others. She was only three years old, by far the youngest hound I've ever lost in thirty years of sighthound ownership.

The emotional part is the empty bed and couch, and our other dog, the rescued Golden Retriever not wanting to go upstairs at all in case she missed a 'return' of her friend who's gone; and my eyes playing tricks on me thinking I see her coming around a corner. The emotional part is the loss of a dog who could NOT be near a human without wanting to at least touch the human affectionately, draping a paw on you after she finished licking you: there is no cuddle-dog next to us in bed any more.

The emotional part is this is affecting my better half more than any dog we've lost in the last thirty years. In that last ghastly morning of her life, I said her favorite word in the world "bunny" to her before the vet's final action as in "go chase the bunnies in heaven." She didn't respond in any way. Maybe she was telling me, as a comfort, that really, truly, she was already gone even before our decision. She was a brand new field champion and multiple Best in Field. She was only three years old. The emotional part is that I can't stop crying.


Drusilla is pictured at top in blue jacket winning, and below after winning Best in Field 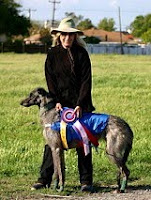 Nothing to say of comfort, except it is a memory of such greatness to hold on to.