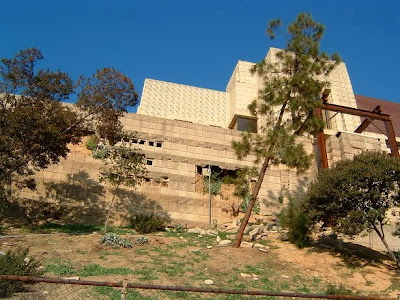 In the textbooks, Frank Lloyd Wright's FALLINGWATER coruscates through the forest river mists like fairytales come true, a magic building floating over a real life waterfall. It's one of my bucket list goals to see/photograph it in person before croaking.
Topsy-turvy-wise, do you architecture groupies know about the only actual building that itself influenced a fairytale? The Hotel Del Coronado in San Diego, California was the prototype for the illustrations of the Emerald City castles in the original Oz books (the first five). The hotel featured a huge cone with tiny, little windows jutting out: you can see it in "Some Like It Hot" where it's role-playing being in Florida.
His son Lloyd Wright's works abound, but there are only three Frank Lloyd Wright residences in my native L.A., the Ennis House in my above photo, the Freeman one that's based upon triangles in cement and Mayan whimsy, and the fabulous Hollyhock House estate and grounds on the only single hilltop (as opposed to range of foothills) in Hollywood. All were from his molded cement period, and all are suffering from neglect.

Ennis House was used as the location of Angel's lair in "Buffy the Vampire Slayer." My photo with the toppled trees and piles of brick debris was taken in 2006 after our rare rains produced much damage as seen above (absolutely nothing is built to last here.) I can't imagine any municipality not restoring a national treasure like a Wright residence, but then again, this is L.A. which insists upon doing the wrong thing at all times.

On the same jaunt I took the above pic. As Mistress of Illusion I love to photograph things that tweak reality. It's not a good shot, but it's of something that's not supposed to exist.

A fellow fantasy movie fan rhapsodized online about "King Kong" whereupon I added that I had seen one of the original Brontosaurus (now Apatosaurus) props from the original 1933 "King Kong" at horror/sci-fi collector supremo Forrest J. Ackerman's house, who was pleased as punch when I stopped in my tracks. He grinned as I marveled that it wasn't supposed to exist, that Willis O'Brien's stop-action armatures weren't constructed to last, and that all the props from original "Kong" were supposed to have long since disintegrated. This one didn't, and he loved the fact that I recognized this sauropod out of all others in the history of cinema, despite its precarious state. Remember the brontosaur rising from the primordial swamp? Here it is, 77 years later. Ackerman passed away in 2008.
Posted by Fast Film at 7:43 PM