IT'S JUST A SHOT AWAY: THE ROLLING STONES IN PHOTOGRAPHS with DAVID BAILEY, STEVEN TYLER, ARNOLD SCHWARZENEGGER et al... 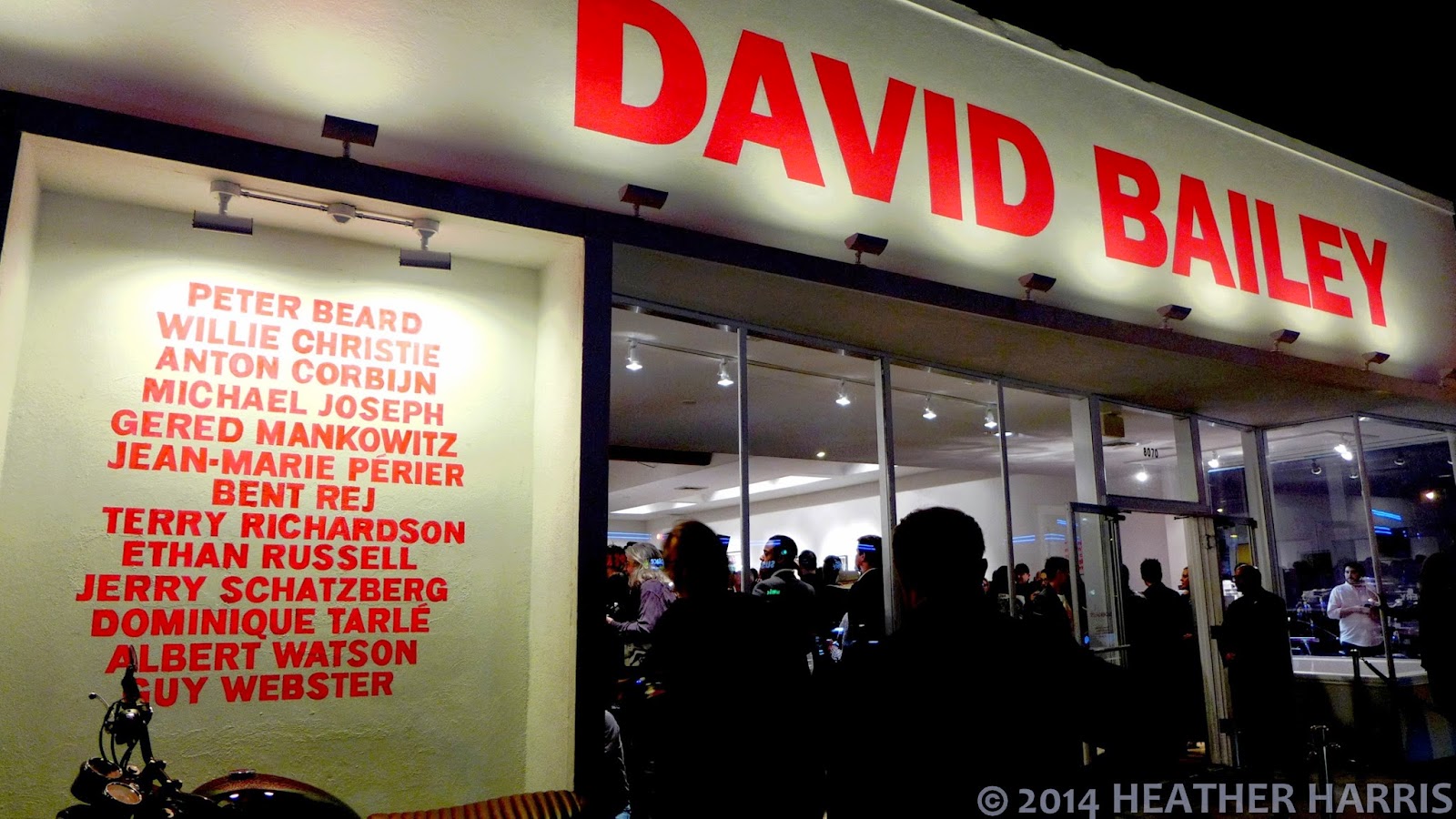 David Bailey, legendary celebrity + fashion photographer and one of my few
heroes (LINK) was guest of honor at the 12.13.14 opening of the TASCHEN Gallery exhibition "It's Just A Shot Away: The Rolling Stones in Photographs." It was easy to spot!


David Bailey and his model/muse/lover Jean Shrimpton rightly were celebrated icons to my generation in the 1960s for being their own self-created personae and being young successes to boot: the "one of ours" syndrome.  But to me, Bailey embodied the adventuresome spirit of the true artist working in commercial fields: he experimented with formats and films, he crossed class barriers as a self-made pro, he made interaction with his subjects personal to that art's ultimate benefit, and he figured out a then new high contrast look that always reproduced perfectly for any periodical from cheapo to art tome in an era of otherwise muddy black and white printing. He was godhead to this self-taught photographer, and boy did I try to learn from his work.

Below, Bailey bridging the past and present as "a black and white memory," title of one of his many photography books published throughout his almost six decades of top flight work; at right, guest photographer © Kurt Ingham: Bailey pictured with a Rolleiflex Twin Lens camera (my own onetime workhorse studio choice pre-digitally: sharper than Hasselblads) and his studio manager/assistant Mark Pattenden. 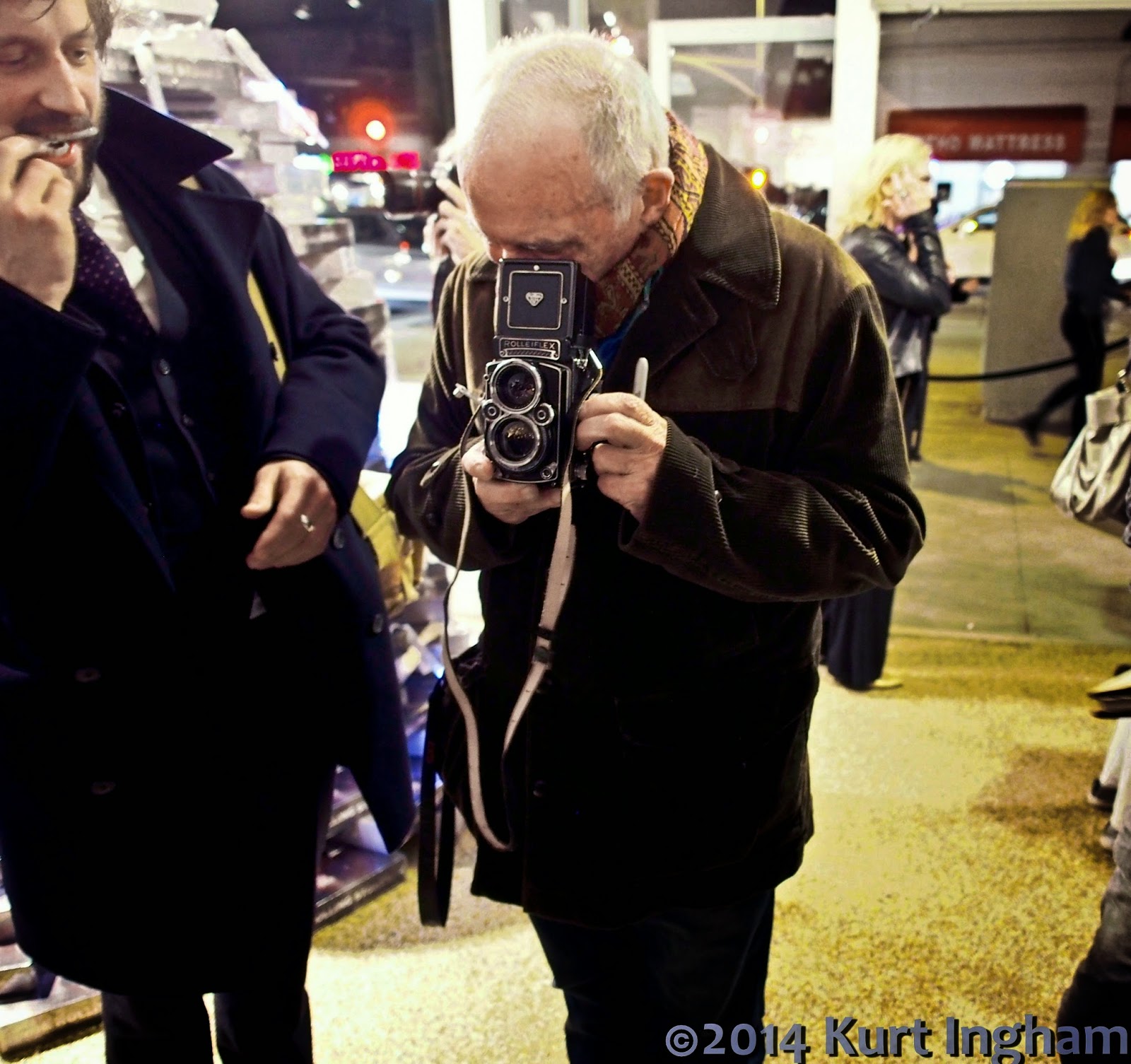 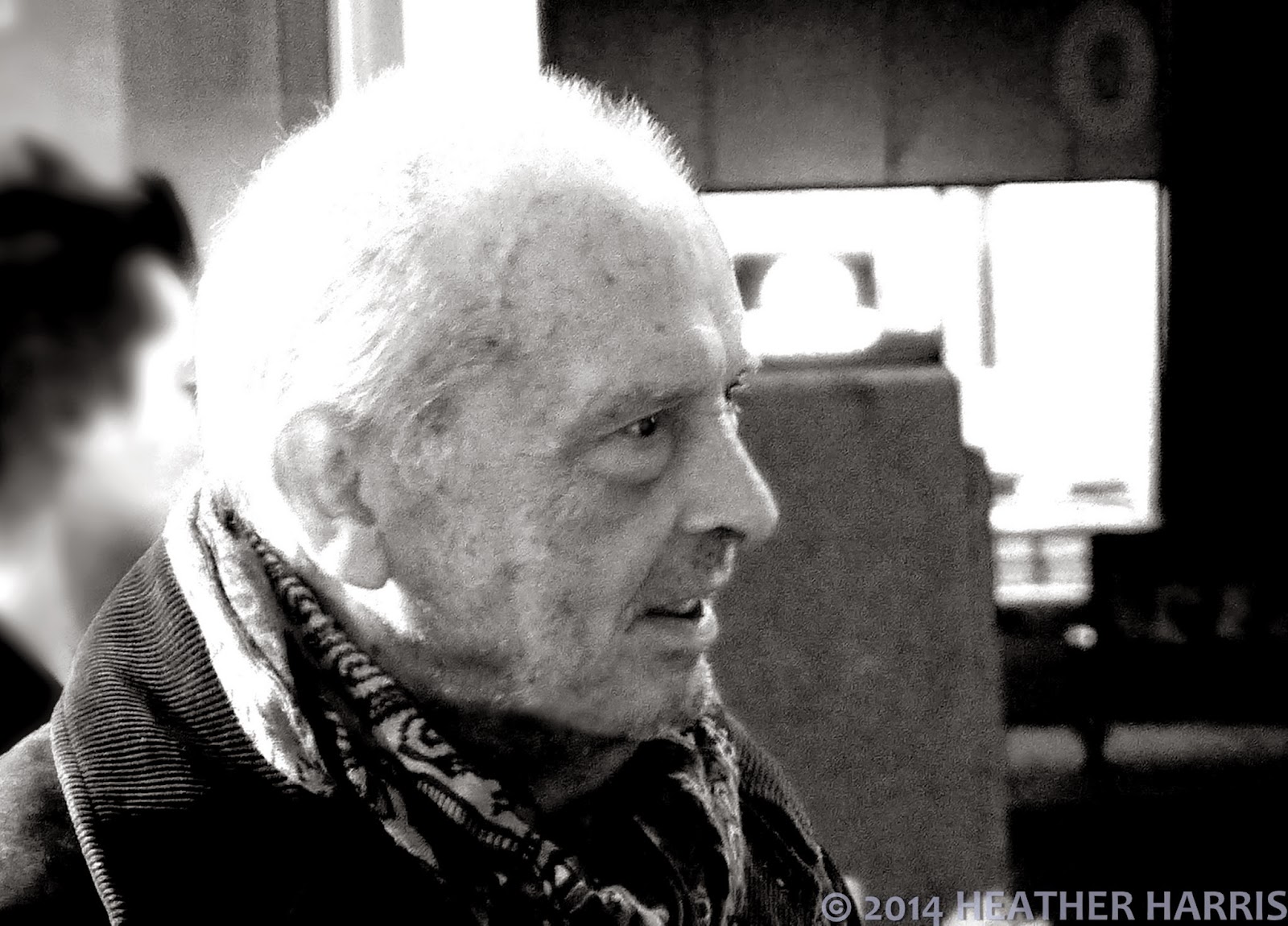 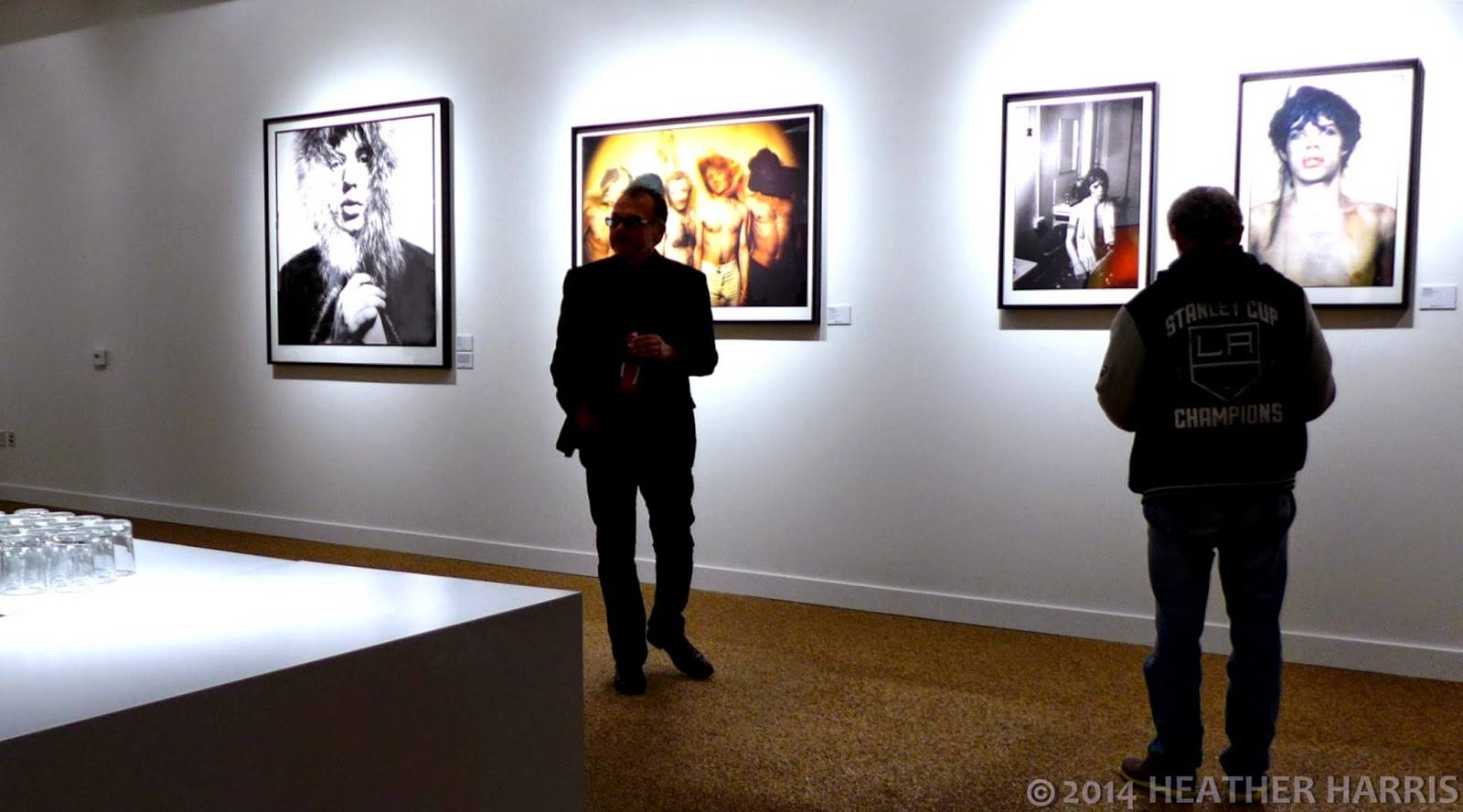 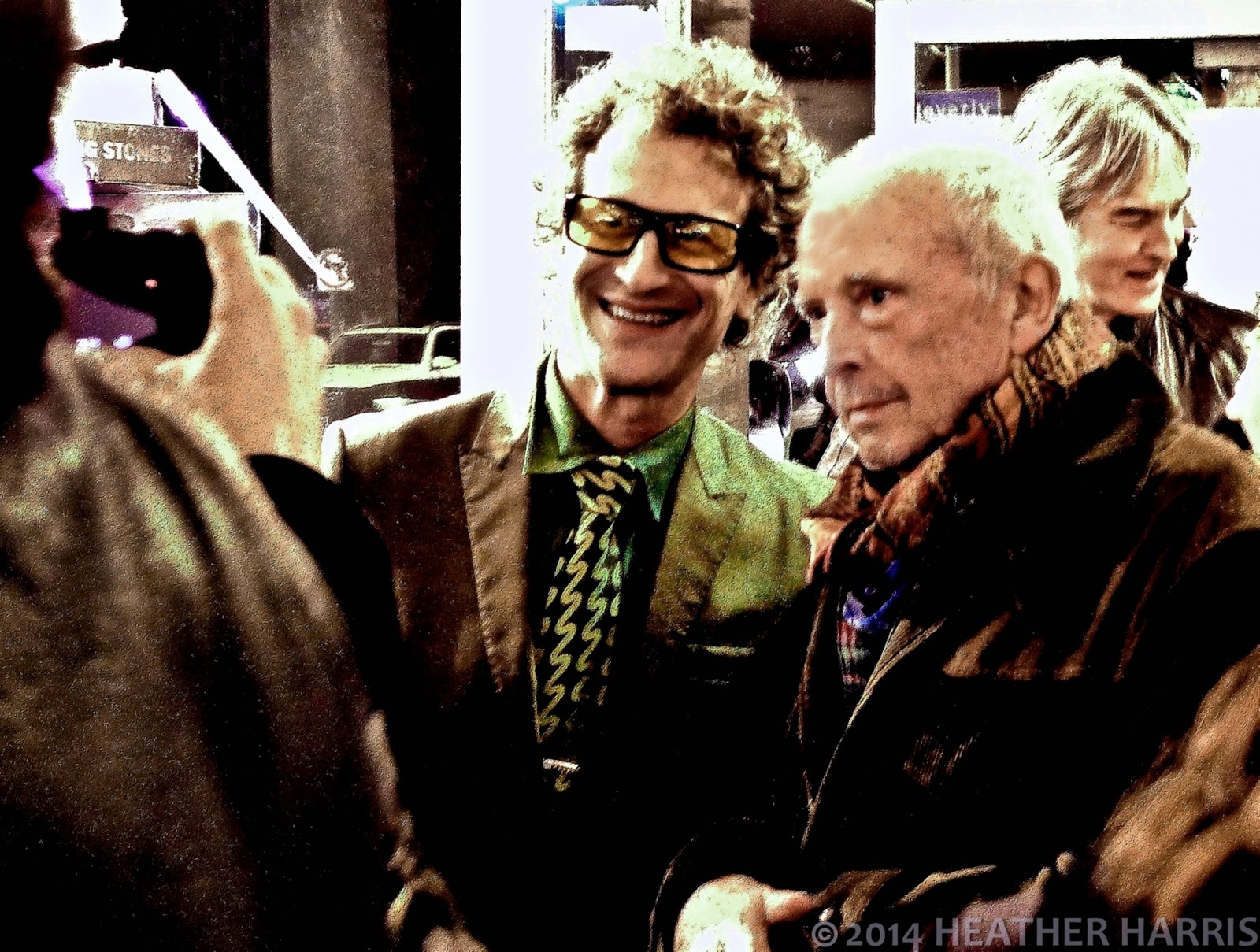 As this was Bailey's first group show since 1971 and a rare Los Angeles public appearance, it joyously became sort of a teddy bear's picnic of local photographers celebrating fellow photogs. Seen above amongst assorted Bailey pics left are, above right, photographer Jimmy Steinfeldt and Bailey; below, guest photographer © Kurt Ingham shots of photographer Brad Elterman with Canyon of Dreams author Harvey Kubernik who attended with his brother Kenneth Kubernik, themselves co-authors of Big Shots: Rock Legends and Hollywood Icons: The Photography of Guy Webster, whose Stones' work was indeed part of the exhibit; right, photographer Harold Sherrick with David Bailey. 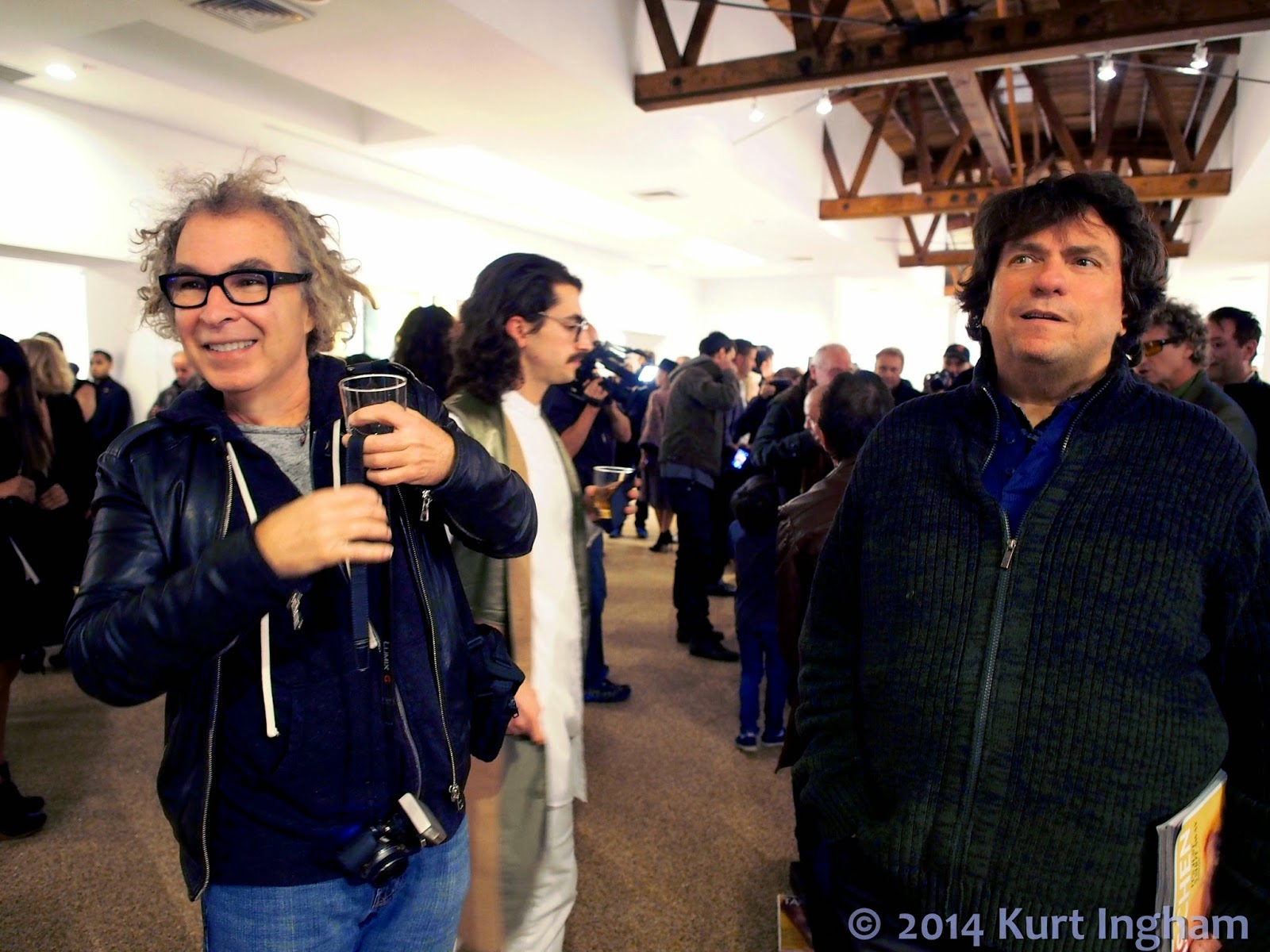 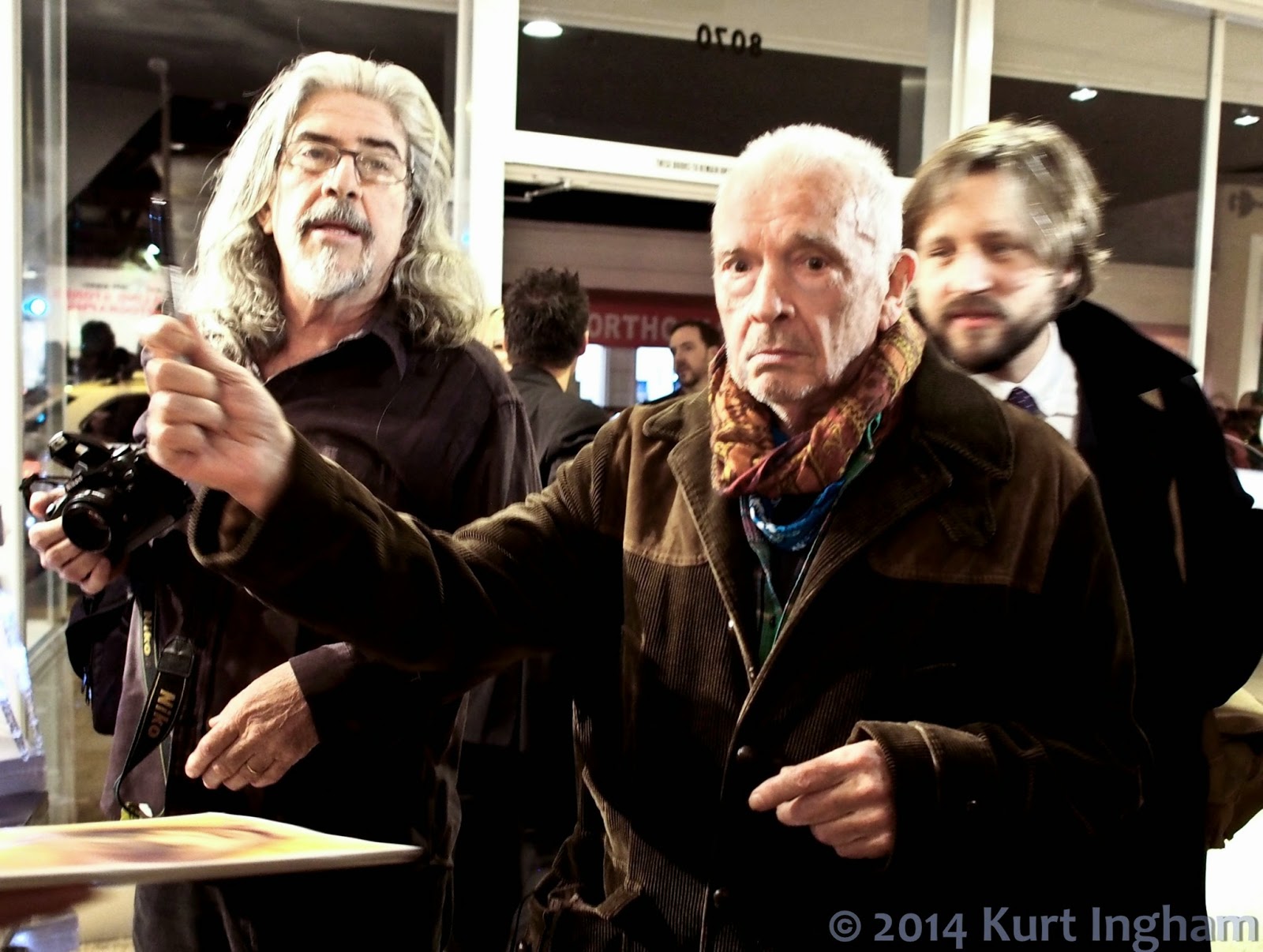 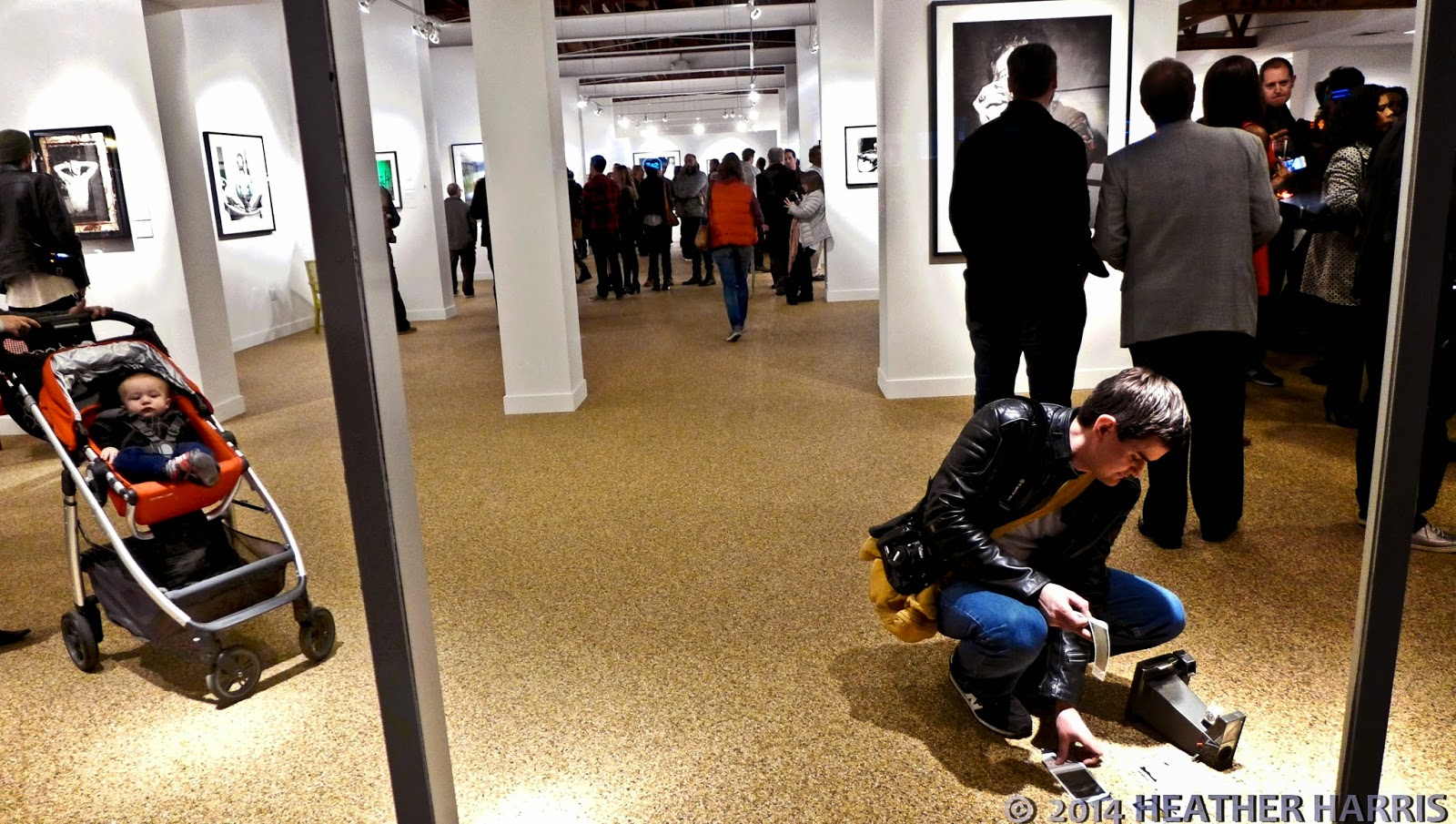 Above, my second favorite shot of the evening featuring two avid photography lovers,
one honing fine art chops in infancy and the other being a very knowledgeable young photographer seen developing his brand new retro-prints on the floor, who covered the event with his Polaroid Big Shot, the very same camera used by Andy Warhol for all of
his own famous portraiture.

Below, Bailey and The Stones' draw of star power: left, Arnold Schwarzenegger; right, Aerosmith's Steven Tyler multitasking by being photographed and talking shop with a small cadre of friends that included-- sorry boys, just out of camera range since both she and I are under 5'7"-- Pamela Anderson.* I smiled at Jack Nicholson who returned it but I did not document same: my soul is not that of a papparaza. Artist David Hockney remained backstage so to speak, while The Honorable Councilmember Tom LaBonge, restauranteur Michael Chow, painter/author/film director Michael Lindsay-Hogg (the Stones' Rock and Roll Circus) and another featured exhibit photographer Ethan Russell made the rounds. 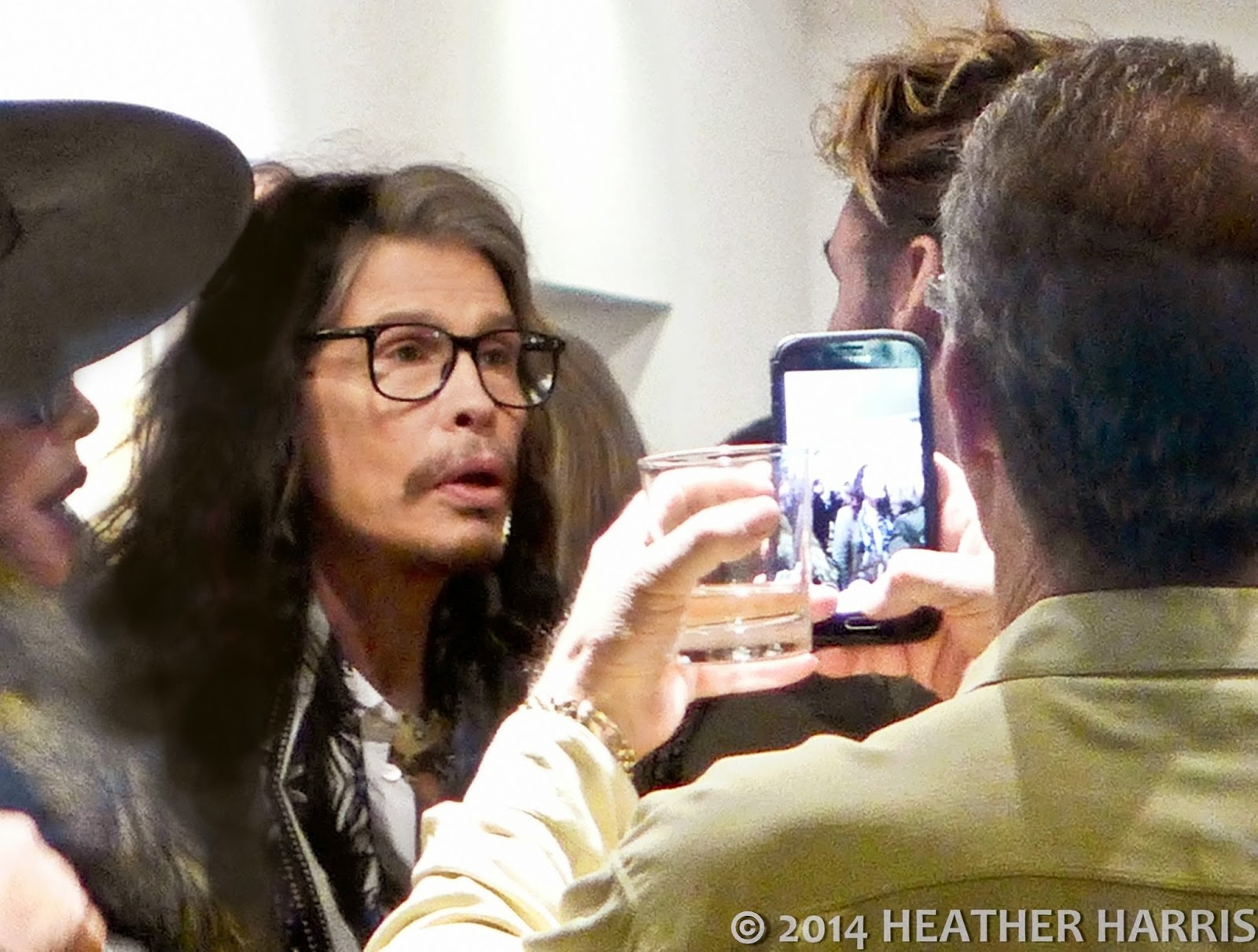 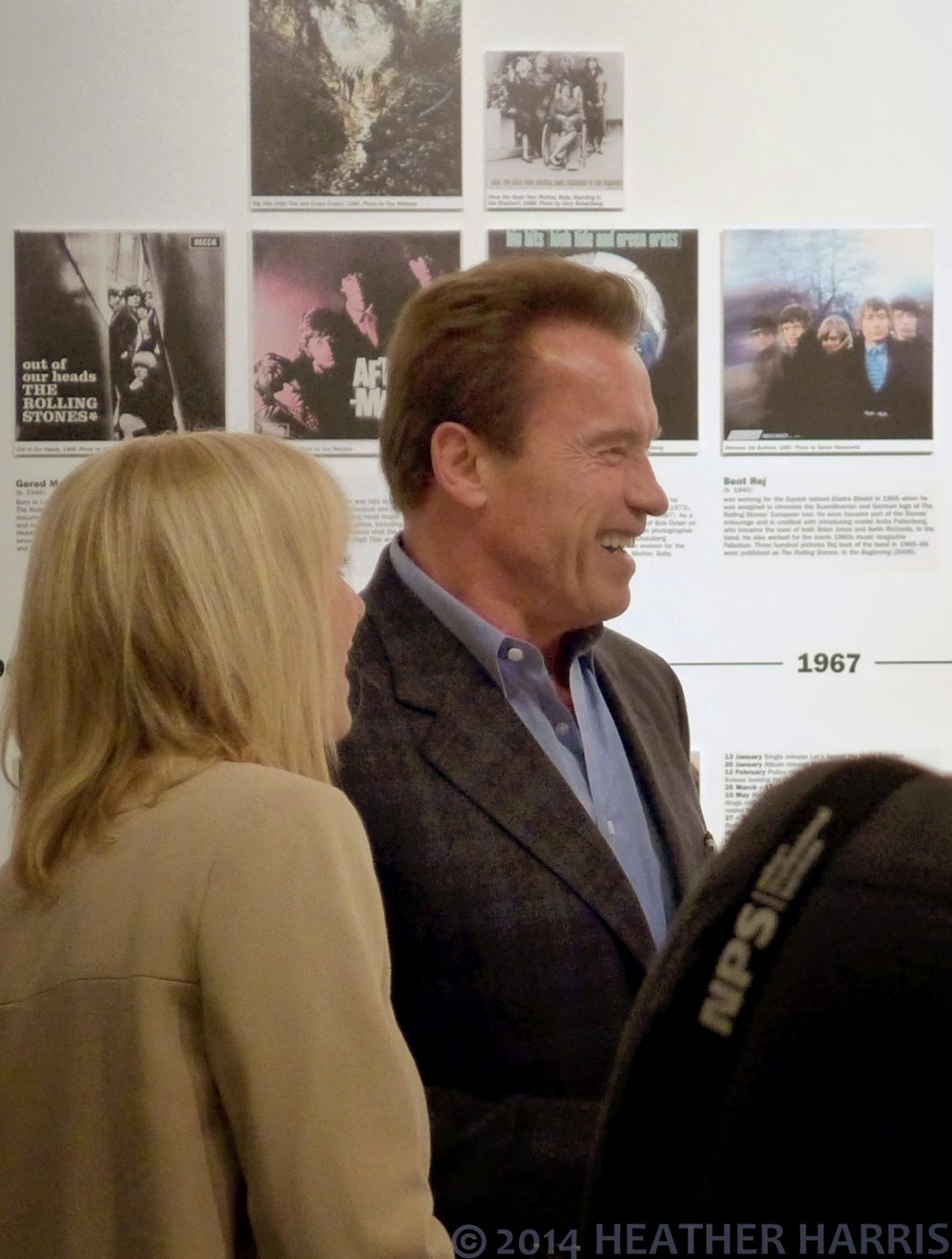 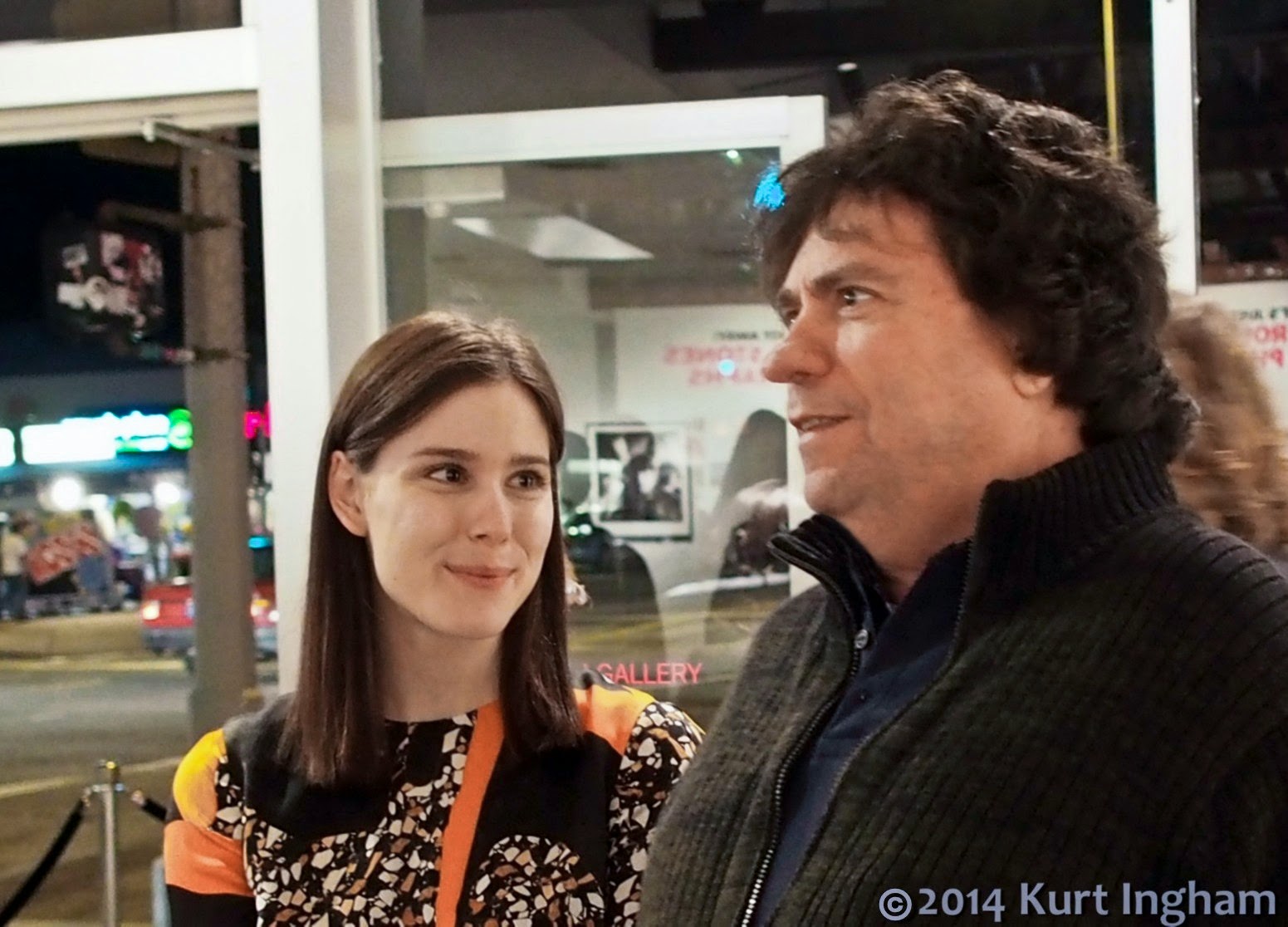 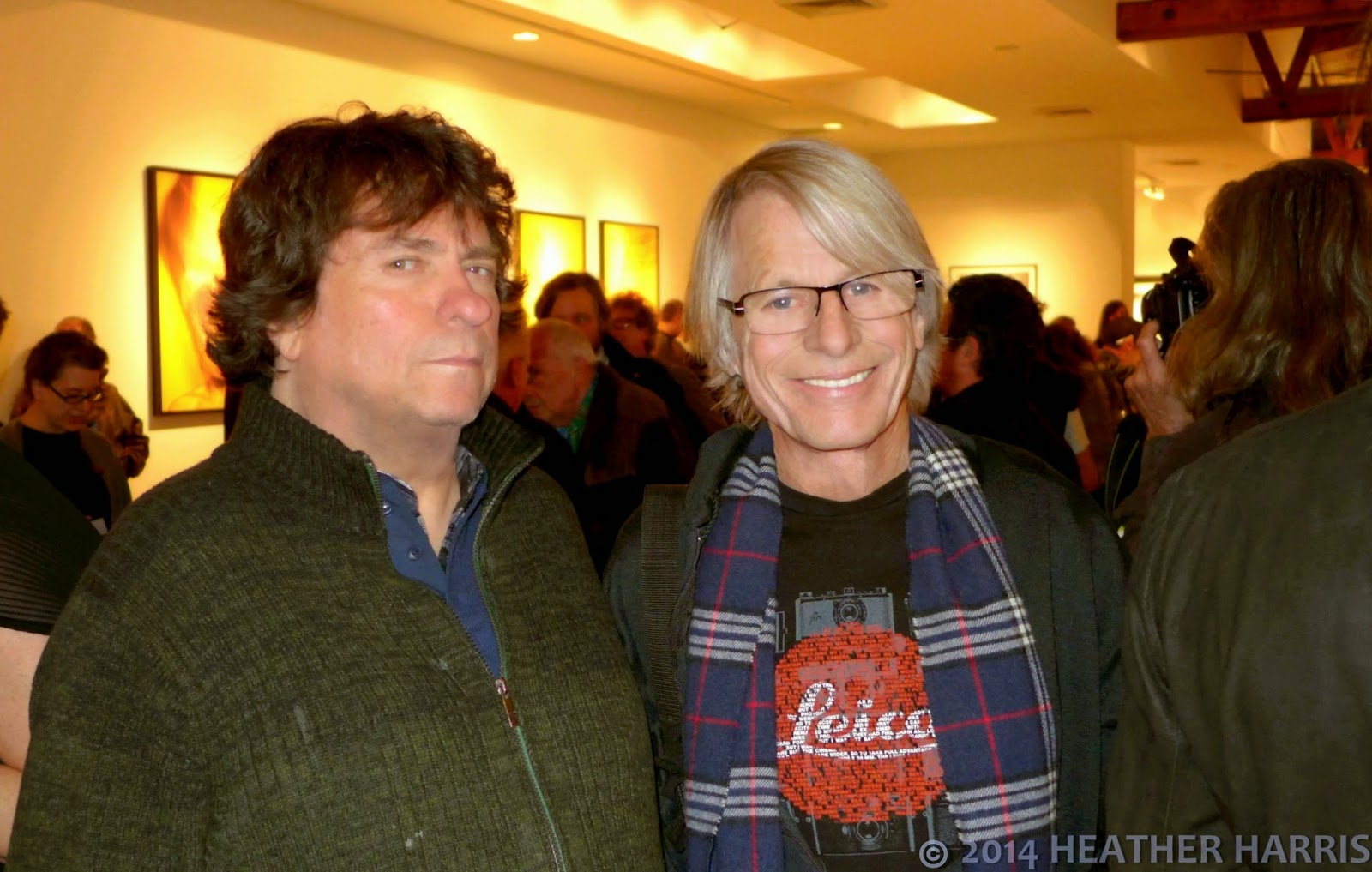 Left and above, Harvey Kubernik and, sporting the Leica shirt I gave him last Christmas, my better half Mr. Twister of Christopher Milk and Chainsaw, who uniquely occupies the twin territories of both magazine subject and magazine photographer. He had cover stories in Rolling Stone when he was lead singer of the band Christopher Milk, and also shot covers for Creem, Entertainment World and many more. 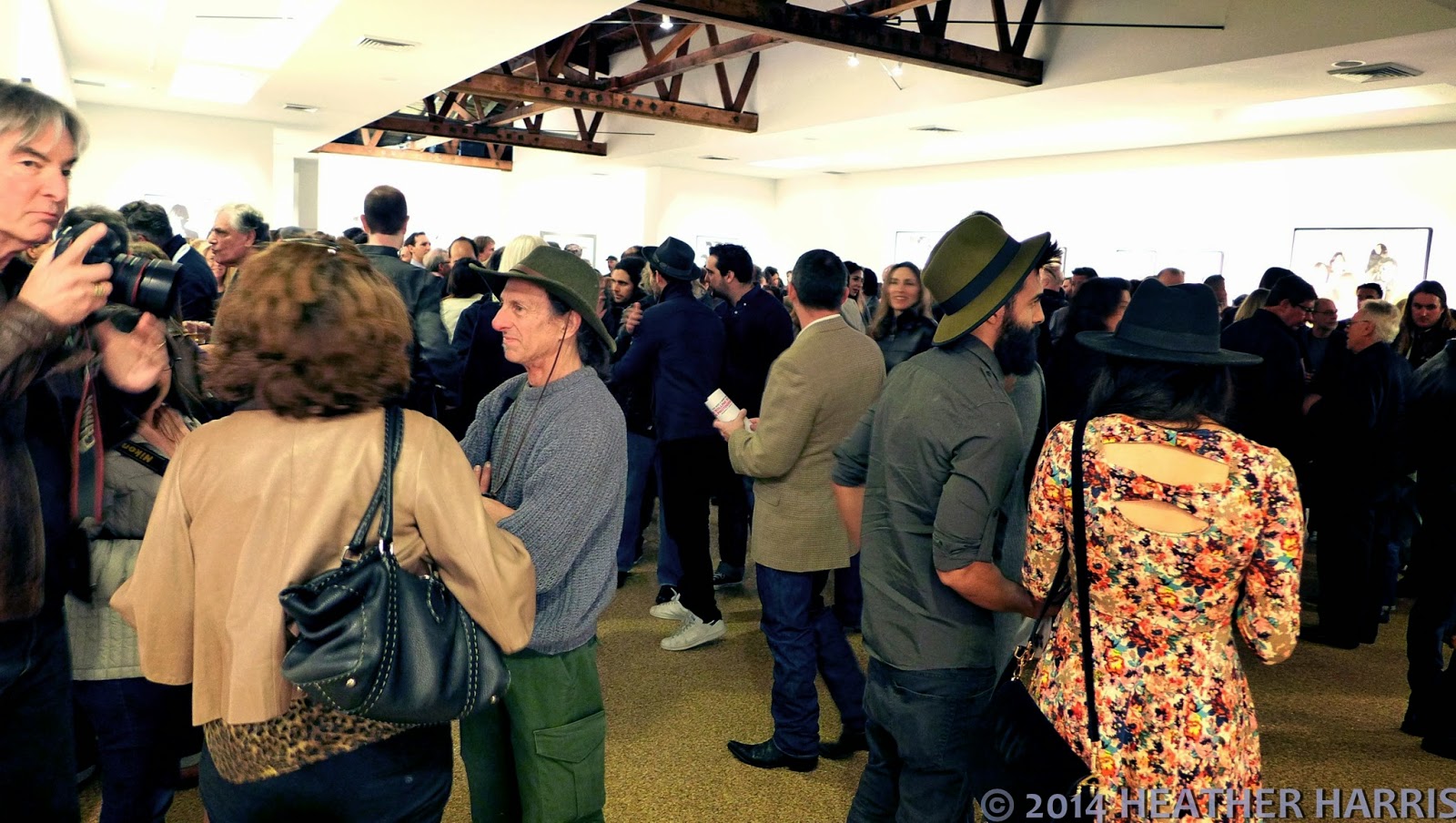 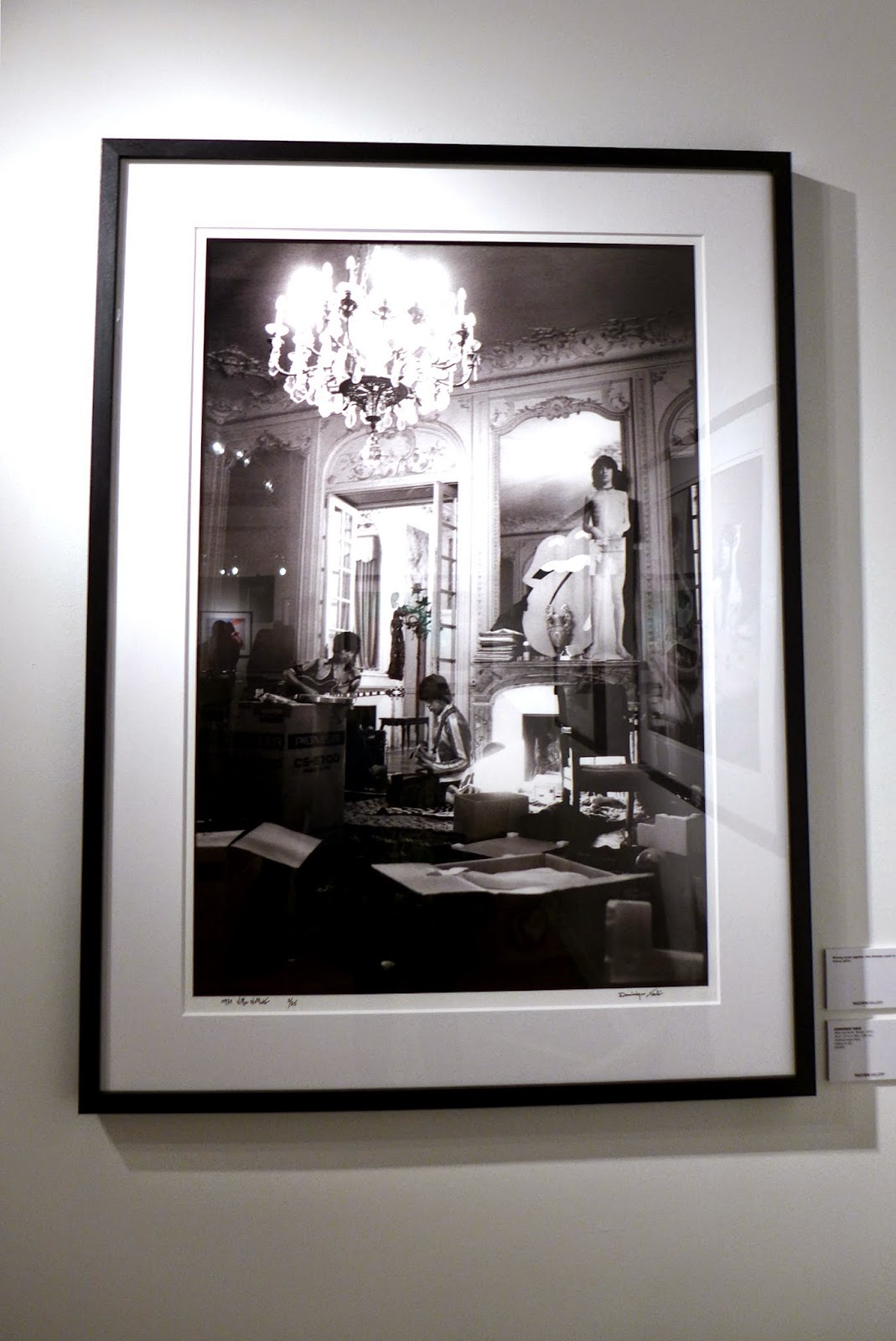 At left below, photograph by Dominic Tarlè of the Stones' 1972 sojourn at the Villa Nellcôte, France to make Exile on Main Street. This photo series by Tarlè has significance for me. Little known at the time, these shots and their originator were uncovered by author Sid Griffin when I told this capable sleuth of their existence, and they subsequently made one of their first appearances in Gram Parsons, a Music Biography by Griffin that I Art-directed in the early 1980s. Gram and wife Gretchen were Keith Richards' guests at Nellcôte, adding much to Exile on Main Street's country rock ambience. Since the photos had taken some effort to procure, I was pleased to read a book review specifically praising the Tarlè shots for "...speaking volumes of decadence." Lastly, a wrap shot: the gala was well attended and definitely enjoyed.

Below left, guest photographer © Kurt Ingham: why am I beaming? David Bailey graciously

signed my "Goodbye Baby and Amen" book of his photographs for me. I had bought the book new in 1969, its initial year of publishing. 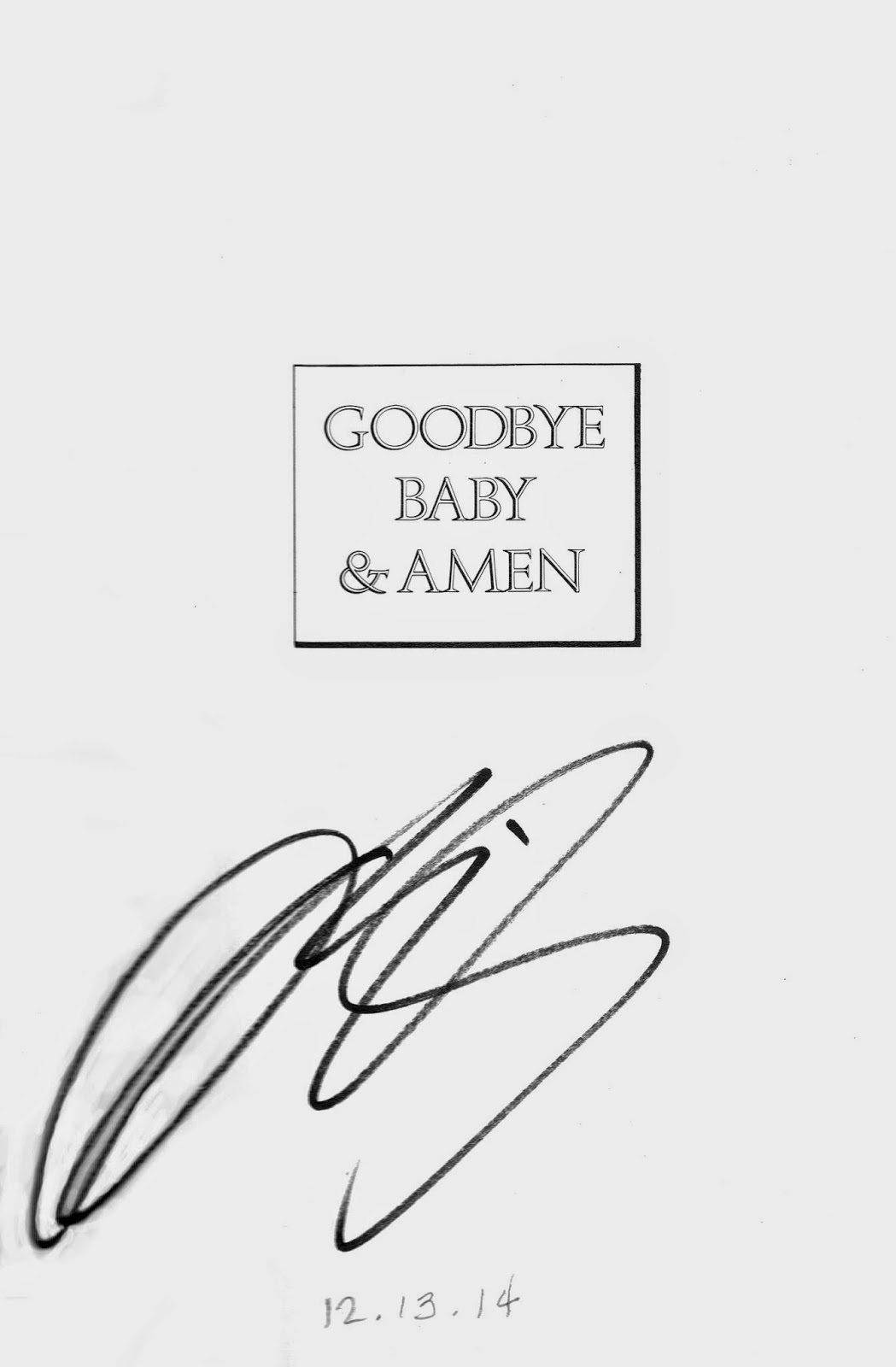 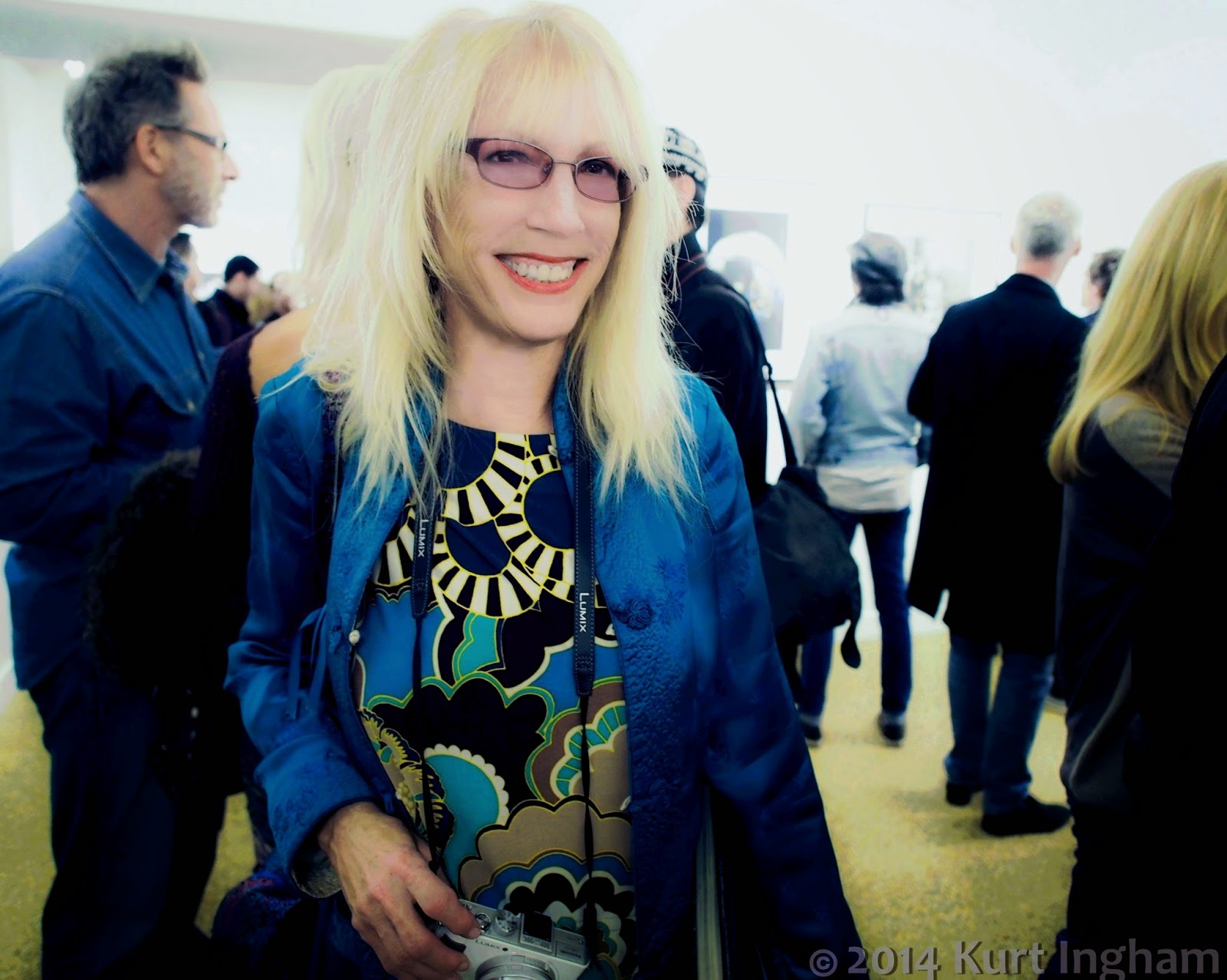 *However, for those of the XY chromosome persuasion who wish to be beaming as well...go to LINK for Getty Images and LINK for TASCHEN house shots. By the time photographer David LaChappelle, David Bailey, Pamela Anderson and model Amber Rose posed for these standard shots, Mr. Twister and I had lit out since I had work later that evening photographing up and coming band Dr. Boogie at Club Loaded in Hollywood, LINK herein...

"It's Just A Shot Away: the Rolling Stones in Photographs" exhibit runs until the end of January 2015 at TASCHEN Gallery, 8070 Beverly Blvd., Los Angeles CA 90048, Tuesday through Sunday from 11 a.m. to 6 p.m. (323) 852 9098 for further info. At the show, TASCHEN Publishing also offers the deluxe, just 1,600 copies limited edition book The Rolling Stones by the show's curator Reuel Golden featuring the show's masterful photographs and personally signed by our remaining Rolling Stones Mick Jagger, Keith Richards, Charlie Watts and Ron Wood.
Posted by Fast Film at 11:09 AM