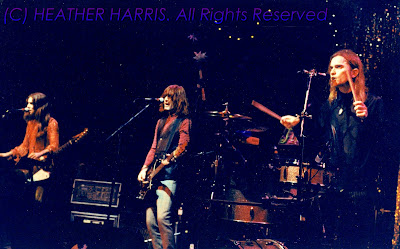 Now that Iggy and the Stooges have reunited with original members, here's another band I'd like to witness in a comeback. They had it all, terrific songwriting, a BIG sound, wondrous vocals plus harmonies, expert playing to match their sophisticated releases, bite, a singing drummer who stood over his kit, danger, smooth deception, cute guys in oddball attire, varieties of styles, and borrowings from the best before them (partial list: The Move, Harry Nilsson, The Beach Boys a la Pet Sounds, Steely Dan, 10CC, Emitt Rhodes, the Roy Wood ELO, McCartney, etc. etc.) They had it all... except timing. Jellyfish, a hard pop band extraordinaire, recorded and performed during the cusp of Hair Metal into Grunge. Witness their lack thereof here in these two videos:

Me, too! I love that band, but found out about them a year after they had broken up. -Mal West