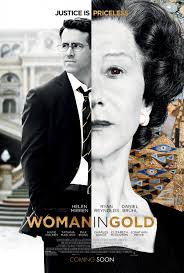 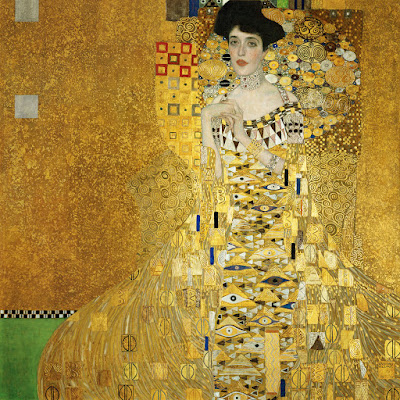 
My eyes hurt today from weeping at the final quarter of the film Woman in Gold last night. Maybe because its scale was more intimate, like Polanski's The Pianist which underscored the total life disruption of a single person in the Holocaust, it remained easier to identify with the devastating losses of one woman, Maria Bloch-Bauer Altmann in World War II than with the masses in, say, Schindler's List. There was also that tear-provoking scene in which the young American attorney embraces the magnitude of his Austrian grandfather Arnold Schöenberg's legacy to the world for the first time when listening to a concert performing the latter's work.  It was just a name before.

This true story of the destruction WWII wrought on her family's lives and of their world class art collection looted by the Nazis brought tragedy home very subjectively for me (to watch at least) since the characters considered their lives and their art to be interchangeable, as do I. It is also a Law & Order type procedural, action/escape adventure, road movie and tale of redemption. Bigtime recommend.

One of the last scenes showcases its star Helen Mirren allowing her character's daydreaming  uncharacteristically to relive her wonderful memories of life in Vienna before World War II, memories launched by seeing her relatives' Klimt paintings again, and a turn of the plot. It's a lengthy, wordless tour-de-force that is reminiscent of its opposite but similar visual conceit in the film Dogs in Space wherein actress Saskia Post's young punkette says goodbye to all her friends in the commune without the audience knowing it is a reverie of final farewells as the character fatally overdoses. Both scenes feature, most unusually, happy ghosts.(**Saskia Post's scene, see the second video I feature in LINK**. Helen Mirren's scene, see LINK***at about 22:00.) And weep... 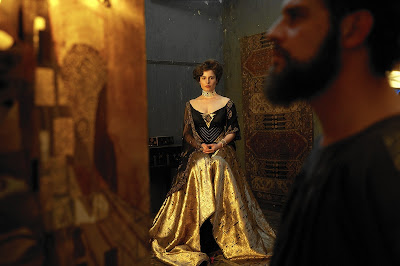 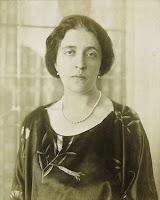 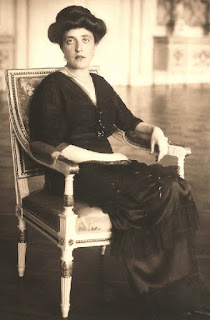 Left and right: the real Adele Bloch-Bauer who died young in 1925;

Below, the real Maria Altmann

In the interest of balance I offer one of the few accounts in English of the international legal issues addressed in the film: LINK.*  Vienna was and is a city dedicated to the arts and music, and I believe its art-appreciative citizenry were let down badly by their leaders' unending refusals to negotiate with Ms. Altmann in order to have these Austrian masterpieces remain in Vienna. She offered: they snubbed her. As David Gionfriddo wrote me, "Austria outsmarted itself by trying to steamroll her with legalities."

Another friend Mark Leviton wrote me, "Historically Vienna has some of the greatest artists and worst politicians." And why? From my reading and brief visit to Vienna, I believe Vienna has just as huge a disconnect between its populace and its leadership as we Americans do at present. My only first hand knowledge observation came from my late grandfather who briefly lived in neighboring Heidelberg, Germany before WW1, (joining dueling and drinking clubs with the actual Student Princes.) He said "It broke my heart to see what Germany did to its own people as well as to the Jews and others. I believe the German people, unlike their tyrant leaders, were good people."

It's almost a prosaic cliche that university students take a shine to Klimt as their first art history discovery (see Buffy the Vampire Slayer season 4 first episode wherein vampires have a wagering tally of Klimt's "The Kiss" versus Monet's "Waterlilies" posters kept as trophies from the freshmen they kill) but Klimt has been a personal favorite since a UCLA art teacher of mine in 1970 pointed out to our class that the very realistic understanding of human physiognomy anchored all the wild stuff. And how ineffably wonderful that so idiosyncratic a visual artist as Klimt has remained so universally liked... 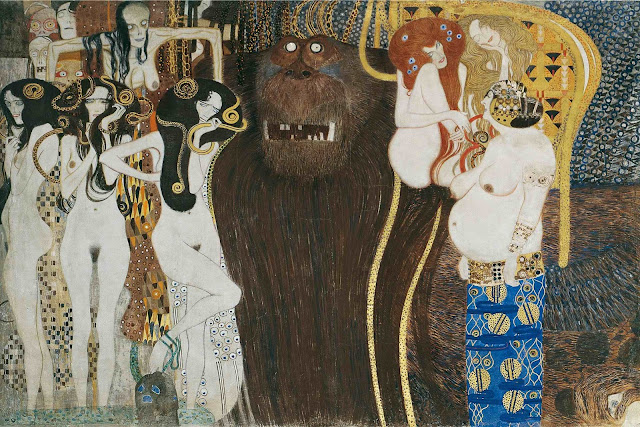 The Belvedere museum was being remodeled with one time I was in Vienna with its Klimt collection truncated drastically for public viewing. Yes, they exhibited this painting and about 7 others (about 16 feet high up an entry wall precluding any close inspection,) but I also had wanted to see Klimt's landscapes which reproduce as poorly in print as the magnificent gold portraits. Klimt landscapes were the other types of paintings referred to in the lawsuit. 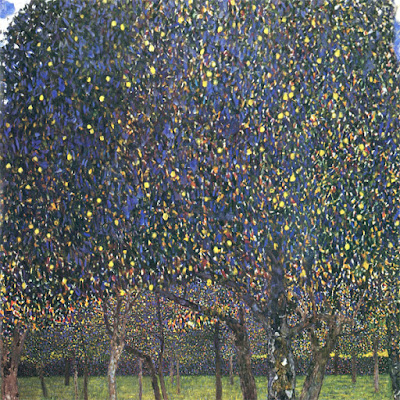 So much of Klimt's legacy was incinerated into oblivion by the Nazis during WWII (the "Nero Decree," if we can't have it no one else can either.) The following works,"Schubert at the piano," 1899, oil on canvas, and "Two Girlfriends," 1916, oil on canvas exist only in photographs. (Thank goodness for Kodachrome's early invention.) But... if only the other 18 or so destroyed Klimt paintings had been photographed in high-res Kodachrome as well, the greatest loss being Klimt's three 14-ft. murals with crazed but beautiful symbolism. Only black and white photos exist of these, much digitally enhanced and restored for recent publications. 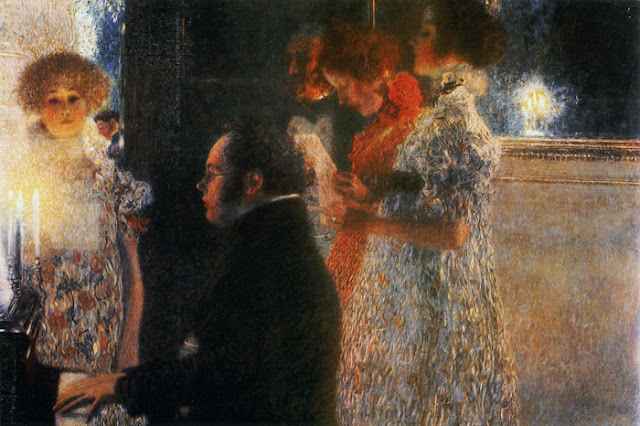 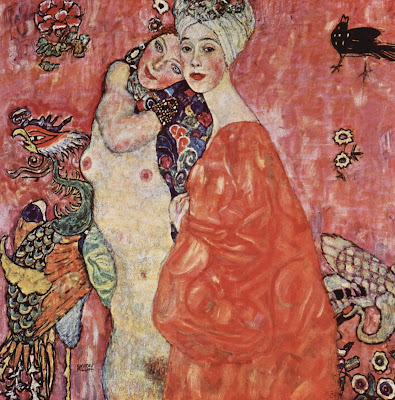 Addenda vis a vis the film's lawsuit premise: although the paintings' eventual sales proceeds were divided among several heirs, Ms. Altmann's portions mainly went to her own foundation and to charities such as The Holocaust Museum, as did those of her attorney E. Randol Schöenberg's. The latter has done much good work in other legal arenas of art restitution as well.

For further reading, another bigtime recommend-- the most substance you'll find on the Altmann Klimt paintings story emanates from the actual source book of Woman in Gold, Lady in Gold by Anne-Marie O'Connor. Carefully researched, it details every single person in the cast of characters, from the Bloch and Bauer families to which Nazis were assigned to what survivors, plus everything that happened to persons and paintings alike. For anyone interested in any major art masterpiece and its context in history, this book skillfully brings every protagonist back to life within the dazzling sweep of life and culture in Fin du Siecle Vienna and beyond.