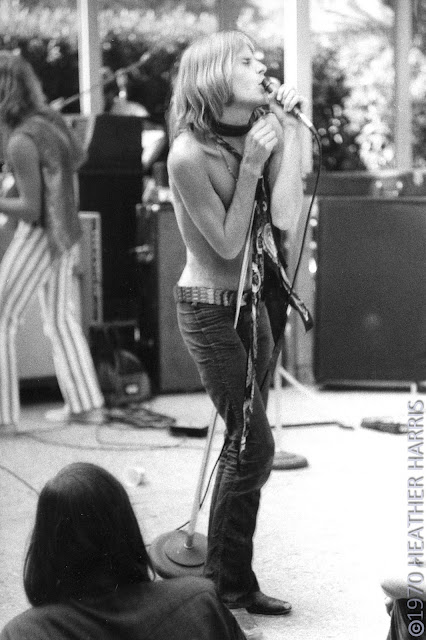 This is my beloved, in whom I am well pleased (profane description of my better half Mr. Twister) in his first band Christopher Milk, 1970, about the time I met him, my photo above of the band performing at UCLA. They were signed to two major labels, performed theatrical rock against the grain of the times, and were reputed to have influenced Cheap Trick and The Tubes, for those outside the know.


Something personal and hitherto thought non-existent emerged a few minutes ago: the only extant film footage of Christopher Milk, with Mr. Twister himself bursting out of a false-front amplifier at 0:51 and nastily intimidating the audience through 1:09. Hey, you take what you can get! Unearthed by John Mendelsohn, shot by Janis Hendler, circa 1970, originally silent.

As I wasn't there, until otherwise corrected it's believed to have been the Long Beach Arena, rather a large venue. At this juncture their set featured myriad highlights/set pieces with different singers--in the above video, Mr. Twister, John Mendelsohn and Surly Ralph-- like an oldskool R&B Revue.

If you're drawing a blank regarding this influential American cult band of the late 1960s/early 1970s go to LINK for the best shortcut to my Paraphilia Magazine photofeature on Twister's groups Chainsaw and Christopher Milk, with the most online copy showcasing the latter outside of its website.

NOTE: link directly back to http://fastfilm1.blogspot.com if all elements such as photo layouts or videos aren't here.
Posted by Fast Film at 9:26 PM