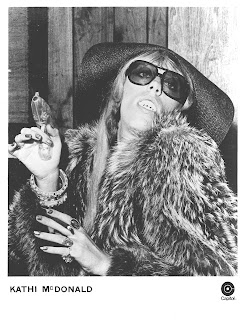 In 1974, Kathi McDonald provided the single greatest entrance to the stage in a small club that I've ever witnessed. She was carried on a divan/litter by The Cockettes (the San Francisco transgender troupe renowned in the late 1960s,*) parting the audience like the Red Sea while torrents of glitter rained down from the ceiling of the Roxy Club, West Hollywood. And me without my camera! (ad hoc invite after work.)

Her Official Capitol Records photo at top illustrates her innate flair for outrageousness which so endeared her to fans, transsexuals and Glam glitterati alike. She even penned a song, "From Bogart To Bowie" noting such evolution or for spurned heteros, devolution.

Kathi McDonald was considered, along with fellow former Ikette Claudia Lennear, the premiere back up singer of the rock scene of the late 1960s and early 1970s, see Joe Cocker's Mad Dogs and Englishmen film and LP et al. She parlayed same into a reputation as a dynamic frontwoman and blues belter, such that she was the sole contender to replace Janis Joplin in the latter's Big Brother and The Holding Company. 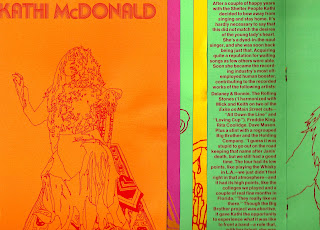 This week she passed away of indeterminate causes at the age 64, an age when she still had her powerful voice and great figure intact. Rest in peace Kathi McDonald, singer extraordinaire.

NOTE: link directly back to http://fastfilm1.blogspot.com if all elements such as photo layouts or videos aren't here.
Posted by Fast Film at 8:59 AM