(Full frontal disclosure: yeah it's a press release but since I wrote it, consider it a soupcon of deathless prose on yet another topic which keeps the faith via a full spectrum of my belief systems. Also, for those concerned with press protocols, a far, far shorter variant was concocted for those with the shorter attention spans.)


Xmas marked the spot. Dec. 25th unleashed THE DOGS' now notorious video "Her Name Was Jane," a cover of The Pagans song with its author Mike Hudson appearing in the production alongside beauteous rock and roll couturier Evita Corby (whose garter belt-clad derriere was kissed by Iggy Pop and James Williamson on the original back cover of their classic "Kill City" 35 years ago.) The latter proved irresistible to the former in both fiction and real life... but you'll just have to watch the video yourself (see link below) or delve into the tabloids at another time.

Today we've come to praise "HYPERSENSITIVE," the long-awaited new release by THE DOGS that coincides with selfsame video release as of January 2012. To note its repertoire includes strong Dogs' classics old and new understates feloniously. Next to be shot by their stalwart video genius Salvatore Sebergandio comes "What Goes In Quiet Comes Out Loud," a spankin' fresh newie. One of them however, "Beatin' The Floor" was the very first song ever written by Dogs' singer/songwriter/guitarist LOREN MOLINARE, although its driving rock sounds as fully formed as the adult Venus rising on the halfshell in Botticelli's masterpiece painting of her birth. 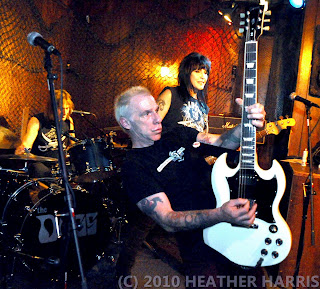 "Beatin' " would date from...1967. As do THE DOGS, add a year for name and personnel changes. In the Detroit/Ann Arbor/Lansing nexus THE DOGS rocked hard, fast and precise (energy-maniacs onstage they may have been, their proficiency as teens cast them practically as rock prodigies) with their own original songs from the get-go. They opened for the likes of MC5, Stooges, Amboy Dukes with Ted Nugent, SRC etc. etc. etc. throughout the late '60s/early '70s as commemorated in "HYPERSENSITIVE's" "Motor City Fever" a real knock-out dating from the same era as the bands it name-checks in one of this band's most powerfully riffed songs ever.


In the later '70s THE DOGS moved to NYC opening for Kiss, The Stilettos (proto-Blondie,) Television and all manner of punks watchful of THE DOGS' pared-down but hardcore Detroit rock performed in their own torn jeans and leather jackets ("Our normal street clothes because," laughs bassist MARY KAY, "we couldn't afford stage clothes.")

Relocation to Hollywood mid-decade would find them opening for AC/DC, the Scorpions, and well, everybody, even Guns N 'Roses a decade beyond. Don't you think you might liked to have seen this genuine triple bill --The Ramones, The Dogs, Van Halen-- at the Golden West Ballroom, bands headline-tiered in that actual order? Where's a time machine or TARDIS when you really need one? The mighty "Slash Your Face 2012" bonus track on the cd dates from this golden age of punks, with the original finding distribution by their self-inaugurated Detroit Records circa 1978.


The '80s and then newly-recruited and present drummer TONY MATTEUCCI found THE DOGS fomenting songs like "Nothing Lasts 4 Ever" as included on "HYPERSENSITIVE." The '90s remained the chill out decade with LOREN splitting for Geffen artists Little Caesar (fronted by the astonishing-voiced Ron Young,) MARY off to assorted Metal bands like SHE ROK and TONY heard drumming in huge Metal Festivals in South America and the like.

The 2000s ushered in conviction to do what they've always done best and reunite (amidst ongoing other musical projects. Again, the 2000s, people.) "You Can't Catch Me" and "Punk Rock Holiday emanate from this era. 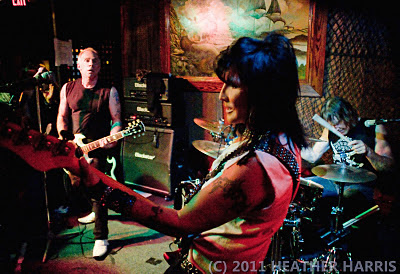 But then the amazing occurred. The classic Detroit sound was vindicated though hundreds of thousands of hard rock fans and bands, continuing to this very second. Iggy and The Stooges even made the Rock and Roll Hall of Fame after seven consecutive tries. And THE DOGS' reputation via the emerging internet had accelerated their doggy tale into its present, deserved status of bona fide, singular, committed, hardest rock/power trio/punk rock legends. Europeans paid outlandish sums for long ago 45 rpm singles on Detroit Records. The Midwest reclaimed THE DOGS as native sons (and daughter) of Relevance, bookings and live dvd "Purity Not Perfection" of same ensuing.

In the Far East of the globe, an aggregate of 29 assorted Japanese alt-punkbands styled an entire tribute cd to THE DOGS entitled "Doggy Style," mid-wifed by Detroit Jack's Future Now. Then came THE DOGS' tour of Japan in 2007 to capacity-filled venues of rabid Dogs' fans ("Loren, you're my Chuck Berry," gushed Aruha.) Vintage Dogs' classics were re-released on modern young labels like Dionysus. Brand new songs like "Good Time Girls," "What Goes In Quiet.." and "Hypersensitive" were written for this very release.

"HYPERSENSITIVE," albeit powerhouse, remains a labor of love...of their own sense of making music as long as they're breathing. Which to THE DOGS music is as important as. You will hear same instantly herein. They've even resurrected their own Detroit Records label beloved of the punk era for its release.

But yet another labor of love has been issued simultaneously with "HYPERSENSITIVE," Detroit Jack's Dogs live performance double-disc dvd entitled "Doggy Days." Not only are some of the Japan performances to be found, but astonishing, historic audio like Sid Vicious and Tony Sales jamming with THE DOGS at the Whisky A Gogo, 1978 and other rare treasures sound-tracked against montages of THE DOGS' entire band history with flyers, headlines (yes, they were arrested. Repeatedly) and many, many stunning photographs such as those by yours truly! 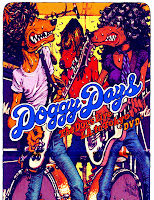 In the "Doggy Days" dvd booklet, MC5 legend, provocateur, humanitarian and still performer of his own supercharged guitar riffs, Brother WAYNE KRAMER wrote an extended essay on The Dogs' four-decade continuity as a group. Within it (summarized to the max) he states, "...The Dogs: brutal, hard-charging, ferocious, uncompromising, committed, raw, etc. et al. But that all seems to miss the point. The point is really... That their work continues to be important to the band themselves and a community of friends and fans around the world fortifies and validates their accomplishment..."


"Is this important? I think it is. Why? Because it tells me I'm not alone. I'm not the only nutcase out there who cares... That The Dogs have existed in a corner of the world of music on their own, under their own power means more to me than hit records and mass marketing... They made it happen in the face of a world that said, 'Just who in the hell do you think you are?' 'We're The Dogs' is the only answer that matters."

(Do check out Retrokimmer's interview with Detroit Jack and his own labor of love releasing the Doggy Days dvd at LINK.)


Once upon a time in mid-'70s Los Angeles, THE DOGS surreptitiously were lumped into the Do It Yourself ethos of the nascent punk scene, ironic since they had zoomed past all that before they even relocated there and started their High Times rehearsal/recording commune and Detroit Records label on Gower Street in Hollywood. They'd already fashioned same as teenagers in the late '60s without industry connections, blowing the locals and visitors alike offstage in all the important venues of the Detroit/Ann Arbor/Lansing radius, later accomplishing same in Greenwich Village, New York City in...1974. Their immediate apartment-neighbor Patti Smith and pals in the punk community sure noticed what THE DOGS were doing, even if the rest of the entertainment world remained deaf, blind and moronically obstructionist.

D.I.Y.? Old hat much? For THE DOGS their enduring credo was Do It Anyway, come hell, high water, or the foremost enemy of rock and roll, the passage of time. Just... Do It Anyway. My all time favorite trangression. -Heather Harris, 12.24.11 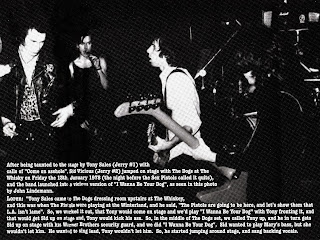 Above,1978 photo appearing in Doggy Days dvd of Sid Vicious and Tony Sales jamming with The Dogs. Audio of same appears too! Below, 2010 photo of The Dogs in recording studio, appearing in Hypersensitive CD. 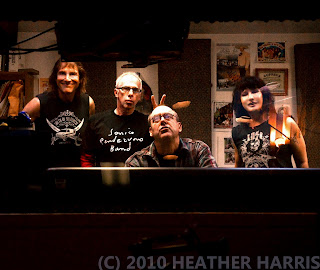 Last but definitely not least, the only occasionally transgressive
Evita Corby in THE DOGS "Her Name Was Jane" video, above and below.

NOTE: link directly back to http://fastfilm1.blogspot.com if all elements such as photo layouts or videos aren't here.
Posted by Fast Film at 9:22 AM