TALES TOLD OUT OF SCHOOL, 1.0, A BOLSHEVIK REVOLUTION: COUP D'ECOLE - ONE DAY THAT SHOOK THE SCHOOL 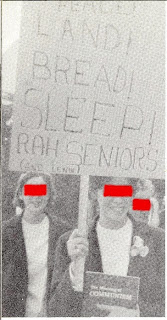 (First in a series of tales told out of school, both literally and figuratively, how my Swiss Cheese brain remembers such events which may or may not be accurate at all. Preface: I attended a girls' private prep school in the 1960s with a student body who often mimicked the creativity of that era with their own high spirits, a pendulum reaction to the heavy course load and voluminous homework from which many of us still haven't caught up on lost sleep some forty-plus years on and from which many of us still retain permanently stooped posture via carrying heavy textbooks. Well, it's not like there existed alternatives to those heavy textbooks. We didn't have personal home computers because no one on this particular planet in this galaxy had them yet. So let's roll back the roiling mists of time to The Pleistocene of my youth.)
(And you've probably forgotten the original sub-title by now, it was A BOLSHEVIK REVOLUTION: COUP D'ECOLE - ONE DAY THAT SHOOK THE SCHOOL.)
Yes, we had our own 1917-style Russian Revolution at the school, a successful Coup d'Ecole that imprisoned the administration and faculty while liberating the students. Its genesis sprang from myriad complaints from the John Birch Society contingent of the Parents' Club. Then as now, the mega-rich proved mega-alarmist. (The whole era anyway reeked of protests amid placards decrying Failsafe Doomsday being nigh, the Viet Nam war still existing, and/or Bob Dylan going electric.)
They'd complained bitterly of the inclusion, nay, even the mention of communism in the school's new modern history curriculum which outlined the Bolshevik Revolution's place and consequences in 20th Century global affairs. They were terrified that private school girls somehow would be influenced by the innate commie-ness of it all and foment their own revolt.

That year's senior class decided obligingly enough to prove their fears well placed and correct. They then overthrew the school.
They picked the day of an all administration/faculty meeting, and locked the latter inside. Re-editing the October Revolution's slogan into a more applicable mob chant of "Peace! Land! Bread! Sleep!" the seniors then called an emergency assembly of the student body wrested from their classes, declared a successful Coup d'Ecole or overthrow of the school and pronounced that we were liberated from academic tyranny and could all go home.
Which we then did.

To stifle the embarrassment of it all, the administration censored any account of the prior day's activities and school proceeded as usual the next day. No mention was made thereafter, save the lone photo commemorating the revolution (see above at top) that appeared without explanation in the yearbook and a very anti-climatic French Revolution staged somewhat later, sloppy seconds indeed involving little activity except very malevolent glowering while knitting tri-color mufflers.
Posted by Fast Film at 6:43 PM