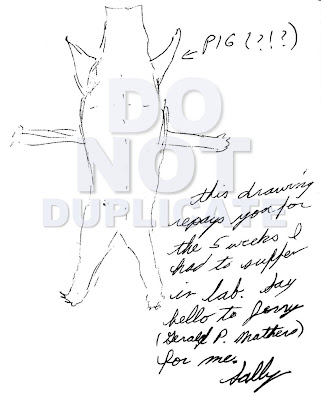 Handwriting reads: Pig (?!?) this drawing repays you for the 5 weeks I had to suffer in lab. Say hello to Jerry (Gerald P. Mathers) for me. Sally

I won't pretend that we were friends, in my understanding of the word now. We were classmates in prep school wherein everyone knew one another because of small class sizes. Today, Sally Ride became, to my knowledge, the third person from my graduating class to pass away.

Earlier this afternoon, former astronaut Sally Ride rightfully was celebrated and eulogized by the President of the United States for being role model extraordinaire as the first female American astronaut in space. After getting a passel of graduate degrees and doctorates at Stanford University, she had applied to NASA as a lark and the rest, literally and figuratively, is history.

At top is her inscription in one of my school yearbooks. The oblique sentences refer to 1) my torturing her with bad puns or humming the song "Mustang Sally" (with its chorus of "...ride, Sally, ride!") during our stint as lab partners in dissection of a fetal pig (named Sir Francis Bacon) (no opt out in those days) and 2) my having set her up on a blind date with my then friend Jerry Mathers, star of the Leave It To Beaver television series.

There's an actual correlation. Most checking the obits won't read that Sally even as a teen had a sense of humor as advanced as her other attributes. For her Senior Personal Quotation underneath her official Senior yearbook portrait, she further mangled surreal existentialism a la Sartre/Descartes into, "I do not think, therefore I am a mustache." Jerry, an acting pro used to his place in the center of attention, proffered great wit for a young person as well. As God is my witness I thought they'd get along great. And I couldn't have been more wrong. Disastrous double date, with half the parties attempting to smoke bananas. It was, after all, the 1960s.

The first classmate to check out from our class did so within a few years of our graduation, dying in a motorcycle crash abroad. The second, married to a State Dept. bigwig, herself a journalist and personal assistant to Hillary Clinton, at least managed a further four and a half decades after our prep school for her own life of myriad accomplishments.

I remember many fun times at school with the first, and also with Sally, a great sport in two senses of the words as she was there on a tennis scholarship, plus she and I shared being the two youngest in class, her from skipping grades and me from the wacko bible elementary school I first attended not being able to calculate age properly.

My memories of the second in our class to die however are impeded by her tacit disapproval of me all throughout our school years. Ultra-bright and multi-talented in all the curricula, she was rewarded scholastically as she would be later in life: her intelligence was quantifiable.

In retrospect, I was off the radar for someone like her, since I excelled in something undervalued in that environment, visual creativity. Besides one measly art class, there was neither attention paid to nor rewards to be garnered for being as talented in the arts as there would have been for someone with 800 scores on each of the English and Mathematics S.A.T. tests.

No mentors, no recognition for the arty gifted in this "corporate culture" which pervaded student body and faculty alike. (Warm and witty Sally either didn't buy into it or didn't care, hence our personal interactions.) It fell upon a few of the more observant teachers here and there even to perceive this undercurrent.

There was a French teacher who playfully would mis-translate texts (e.g. "I'm worried my wife's baby is not mine. And it's not. It's a baby dragon") which made me sufficiently comfortable to offer novel twists on his homework assignments to complete same, translating songs of the era like "Hey Mr. Spaceman" by The Byrds into French to watch the class and him giggle at les petits hommes verts.

I wasn't even aware that he'd seen through my joking to get myself through the school days and back to my art (I drew all the time at home with rock music playing for much needed distraction/counterbalance to tune out copious badness, and tried to teach myself photography without having any suitable equipment) until he wrote the following yearbook inscription (same page as Sally's) below. He was right: I did find it more and more difficult. And I never forgot him either.

Excellence is excellence, no matter which solution. Rest in peace, Dr. Sally K. Ride, justly celebrated for her accomplishments, rightly honored in history.  She had a great sense of humor. 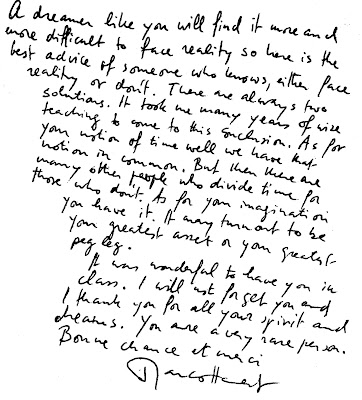 Handwriting reads: A dreamer like you will find it more and more difficult to face reality so here is the advice of someone who knows, either face reality or don't. There are always two solutions. It took me many years of wise teaching to come to this conclusion. As for your notion of time, well we have that in common. But then there are many other people who divide time for those who don't. As for your imagination, you have it. It may turn out to be your greatest asset or your greatest peg leg. It was wonderful to have you in class. I will not forget you and I thank you for all your spirit and dreams. You are a very rare person. Bonne chance et merci. Marco Hauert

(from linkage on Facebook) Thank you Heather for sharing this. It's the personal stories like this that make me very grateful for the Facebook experience. best wishes, always. Eric Predoehl

Hi Heather,
Thanks for sending your words about Sally. It brought back memories of our times together in that past life we call high school. Not only are you a visual artist, you are a brilliant wordsmith. I remember you as my best friend in high school, giving me permission to live out of the box. I was immature and clueless back then, living the life I was programmed to live.
Having classmates die is a sad reminder of the preciousness of life.

Thank you for who you are,
Jill