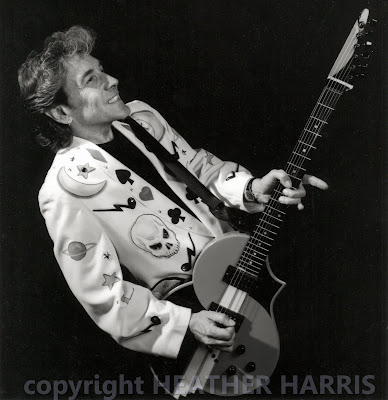 Rick Vito, famed smoooooth blues/rock axeman for so many of The Bigs (every time you hear Bob Seger's "Like A Rock" in those Dodge Ram truck tv adverts that's Vito's licks,) when he was guitarist alongside Billy Burnette for Fleetwood Mac circa the '90s. This was taken with a medium format Rolleiflex in my studio to resemble, at his request, a live stage shot.

He was sporting the greatest rock jacket since Nudie's bespoke one for Gram Parsons with the nekkid women, pills and weed leaves seen during the Flying Burrito Brothers' era (my photo of same LINK. I'm partial to Sneeky Pete's applique pterodactyl.) The man has style. The man also has manners, as he remains the only client to date that brought yours truly a little hospitality gift for doing the session (a large plastic tiki head.)(I still have it.)

The man also has quite a career, and an interesting new musical direction of late. From his signature tasty blues a la Peter Green meets Jeff Healey seen in the video below (along with aforementioned fashions and sleek Art Deco-esque "Streamliner" guitar)...

to today's Rick Vito, below in a video of Mick Fleetwood's Island Rumours Band, playing his beautiful custom Moore Bettah ukelele (curly koa wood, rope purling and a tiki headstock! I guess he has another signature besides his Reverend Signature guitar) at a gig in Maui, HI. 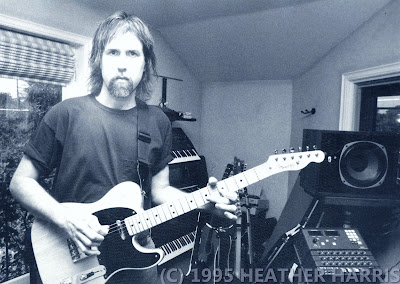 Collaborator of Alanis Morrissette and rightly credited with jump-starting her post-teenybopper career into its respectable and enduring singer-songwriter one, Glenn Ballard is seen circa 1995 above in his home studio where many of the "You Oughta Know" et al ideas germinated.

Although understandably far more swank 'n' spacious given his success, the Ballard abode wasn't all that far away from our own digs in a part of SoCal that attains ridiculous heat temperatures in the summertime, and I remember being impressed with, besides his talent, the coated window panes in his home studio. They were the same fog-blue that I've tinted his portrait above, which surely supplemented the home air-conditioning with an illusion of cooler climes outside. 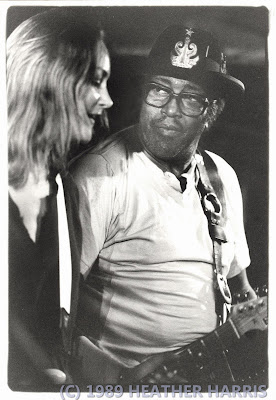 And lastly, the man his bad self, Bo Diddley. Inventor of da da da da da, DA dah!--the Diddley beat backbone of rock 'n' roll. And on 5.2.89 guitarist Nancy Luca jumped onstage to jam with him at Hollywood's Coconut Teazser club. The brass! But his sidelong glance that I shot from being up close and personal: priceless.
NOTE: link directly back to http://fastfilm1.blogspot.com if all elements such as photo layouts or videos aren't here.
Posted by Fast Film at 8:54 PM