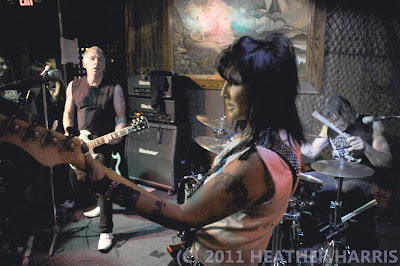 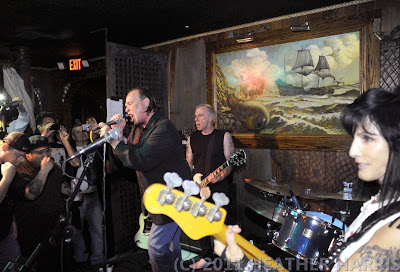 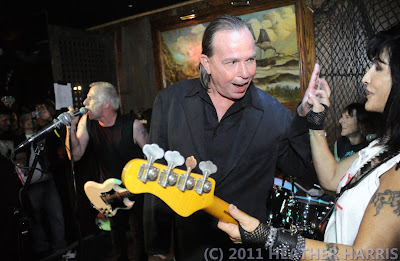 A relative by prior marriage to one of The Dogs, Niagara Falls NY newspaper owner/reporter Hudson was only too happy to trek across country to jam their cover of his "Her Name Was Jane" (see photos above.) "Jane" not only will appear on The Dogs' eagerly awaited new "Hypersensitive" release but also was filmed two nights later by big league video studio S.J.S. Entertainment, roping in Hudson and friend of the band Evita Corby, normally a rock clothing couturier, to portray the song's protagonists. (See forthcoming blog.)
Objectively as well as subjectively, I'm pleased as punch to report that this was one of the best Dogs' sets in the 25 (of their 40) years I've been present to witness and photograph. Their massive sound was correctly full on for the venue, their set proffered a perfect combination of older and newest material, and the band, always peripatetic and active, seemed to be having as much of a blast as its loyal fans.


Below, the backstage blues with Mary and Tony waiting to play and kick ass! 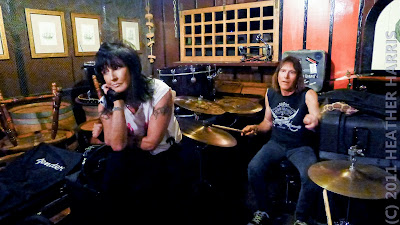 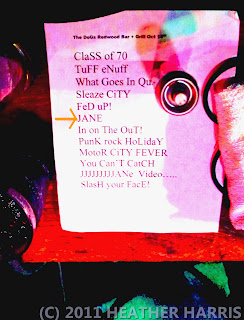 Above, all a musician's essentials: set list, Finger Ease, towel and liquid refreshments. In this case it's bassist Mary's.
~
PHOTO OPS section: Above, left to right Tony Dog, Mary Dog, Evita Corby (who starred in the Salvatore Severgandio video production of The Dogs' "Her Name Was Jane" along with its author Mike Hudson of The Pagans,) Loren Dog and Danny DeMuff (1980s Dog.) 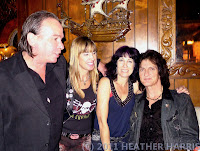 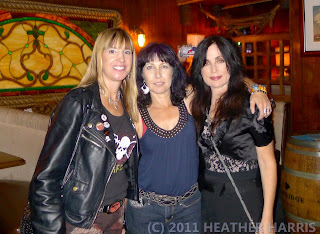 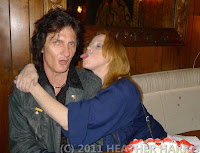 *whereas their spankin' new dvd is called "The Dogs, L.A. to Tokyo." Fuller description and where to order on future blog.

NOTE: link directly back to http://fastfilm1.blogspot.com if all elements such as photo layouts or videos aren't here.