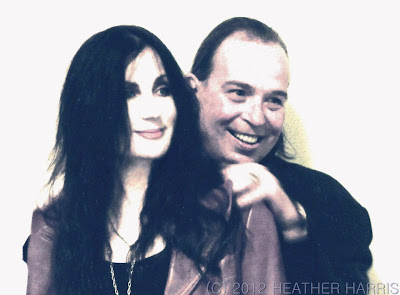 Above and below rock and roll couturier Evita Corby and author Mike Hudson are all smiles Feb. 4th at the latter's birthday party/housewarming of the New York state transplant's new L.A. digs. Evita, also a pro video stylist, furnished his flat in antiques in a mere three days for an impressively thrifty sum. 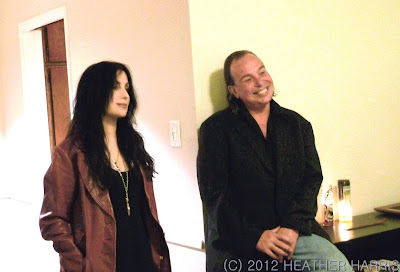 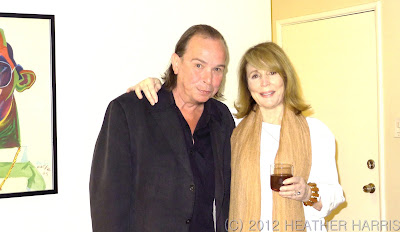 Above, Mike gets a warm welcome from Evita's mother Carol. 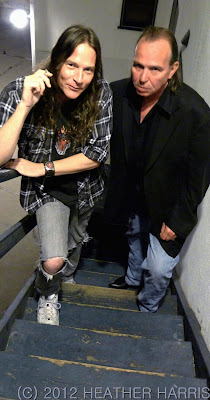 Above, quasi-reunion for The Pagans with Bobby and Mike striking a surly but amused pose on the back steps. Below, Evita and Mike restage the steps shots another way. 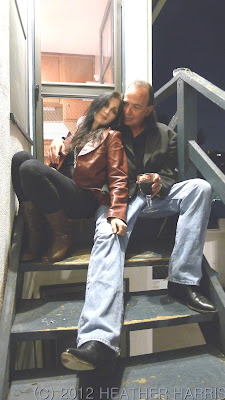 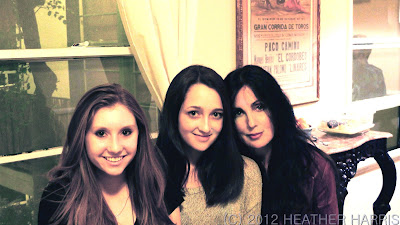 Above, Gilbert and Sullivan's "Three Little Maids From School Are We?" Not quite, it's Evita and her daughter Sierra (middle) with schoolchum Olivia far left. Peeking from behind is Mike's collectible poster featuring 'Sixties pop culture phenomenon El Cordobes, "the Mick Jagger of bullfighting" as I explained to others (undepicted herein as I forgot to obtain their consents.)

Although Fastfilm herself decries deliberate cruelty to animals, one easily understands how Mike, a fan of all things Spanish and Mexican plus, after all, himself a former flashy punk rock lead singer and current crime reporter and chronicler of life's seedier habitues would be drawn to a media star like El Cordobes whose Wikipedia listing begins "Born into poverty, reared in an orphanage, a construction worker and petty criminal, at the age of twenty-three (he) lived in Cordoba and dreamed of being a bullfighter..." 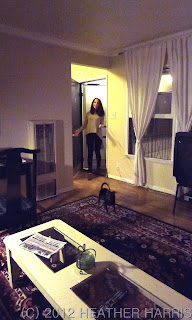 Above, Sierra returns from a mission of outside walkies with Rowena, herself the subject of the funniest quip that evening. Mike's brother Bobby dryly intoned that he first learned of the formerly diehard East Coast denizen Mike's move to LaLaLand when the latter began a phone call with words Bobby thought he'd never hear,"I'm sitting here beside a swimming pool in Los Angeles with my Chihuahua..."

Below, huzzah! Mike Hudson signs a copy of his newest novel Never Trust the World for me with unexpectedly touching epithets. 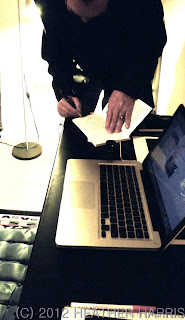 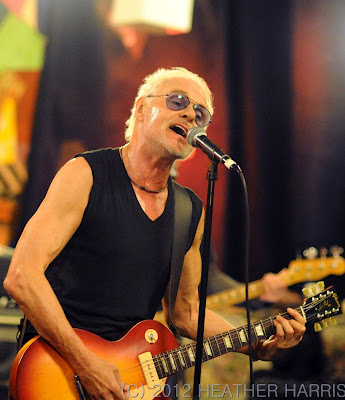 My better half's punk band Chainsaw broke up in a fistfight
circa 1978* in North Hollywood's The Alley Rehearsal Studio,
but here we espy a far better showcase outcome at the venerable venue. Seen above and in photos below, hot and dynamic
The Michael Des Barres Band performed for select fans/V.I.P.s plus Gonzo Multimedia on 2.3.12 and indeed earned an affirmative nod from the latter. They currently are in discussion to release a studio album of all new material from this band sometime later this year. 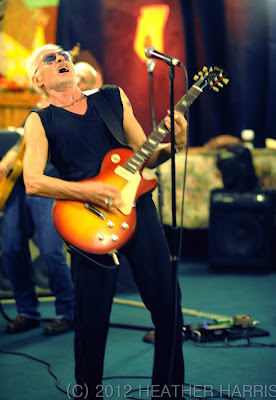 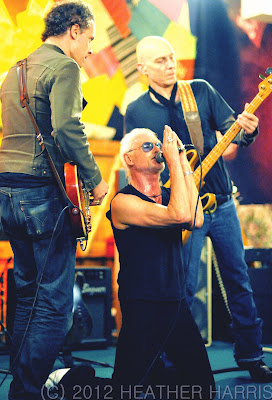 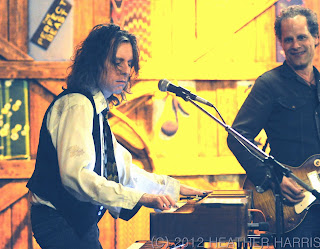 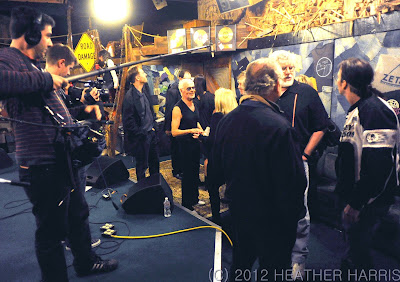 Media frenzy afterwards!
Click for FAQs and more info on these soul-rockers here-LINK.

* Unlike the wretched Brian Jonestown Massacre industry showcase fistfight depicted in the music doc "Dig!," (see Worst. Showcase. Ever. LINK,) Chainsaw witnessed eventual happier results, not to mention complete vindication some 25 years later with a reunion tour of Italy in 2003 plus re-releases of Chainsaw classic material on both European and American labels. See LINK for reunion tour video and my photographs of same.

NOTE: link directly back to http://fastfilm1.blogspot.com if all elements such as photo layouts or videos aren't here.
Posted by Fast Film at 4:31 PM