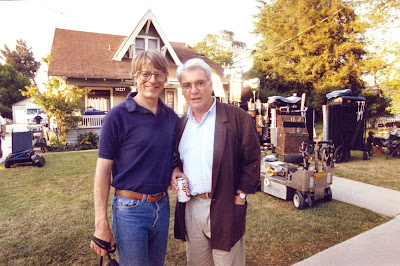 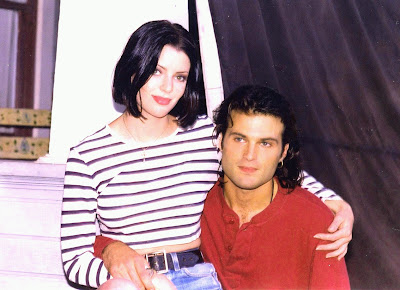 The Aron Spelling tv series "Models, Inc.," itself a spin-off of "Melrose Place," shot many scenes at our house for its first eight episodes in 1994. Our unusual-for-L.A. 1912 farmhouse and large grounds attracted rather a lot of location work back in the 1990s when there were still scripted dramas to be filmed. Ratings declined when the storyline was moved away from our home, proof of its innate star power!

Pictured above are: Mr. Twister (fellow homeowner/ Fastfilm better half) and director (the late) Charles Correll whom I already knew as the older brother of my teenhood chum (and current director) Rich Correll; Teresa Hill and David Goldsmith, who portrayed the quarrelsome model and musician enhabiting our house. Of their large ensemble cast, Carrie-Anne Moss ("The Matrix") proved the only breakout performer to date.

Our house tended to be typecast as musicians' dwellings due to our music collections, musical instruments and overall abode funkiness. This scored the ultimate heights when Roger Daltrey, Carmine Appice and Denny Laine performed on our front porch as apex of a 2-week shoot for the (straight to dvd) movie "Chasing Destiny" which also featured Lauren Graham's first leading role alongside Christopher Lloyd and Casper Van Dien.

Both Mr. Twister and I gave Mr. Daltrey our respective best 1970 shots of The Who in a turnabout of folks generally asking musicians/actors for something of theirs as keepsake. By prior agreement, Mr. Twister and I, known photographers, were prohibited from taking shots of this production, but the price was right: that year, our house paid for itself, 100% of its annual mortgage.

video LINK for "Models, Inc." scene starting at our house;
video trailer for "Chasing Destiny":
NOTE: link directly back to http://fastfilm1.blogspot.com if all elements such as photo layouts or videos aren't here.
Posted by Fast Film at 6:47 AM