100th anniversary today (5.29.13) of punkrock-style riot over first performance of Igor Stravinsky's "Rite of Spring" (Le Sacre du Printemps) as performed by Diaghilev's Ballets Russes in Paris, choreographed by titanic dancer Vaslav Nijinsky, himself reduced to shouting and pounding the beat on a chair to the dancers and orchestra over the audience's yelling and catcalls. Contemporary 1913 media illustration below: 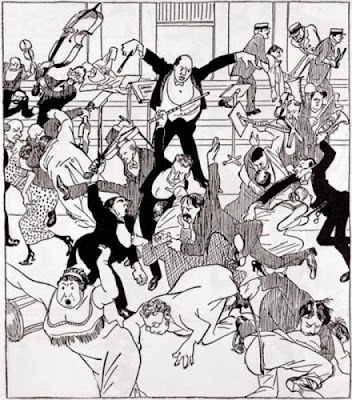 Why riot? "The shock of the new," in both music and visuals...

Disney's "Fantasia" had worthy animation of no less than the entire scope of creation up to the Cretacious/Tertiary extinction utilizing the score : 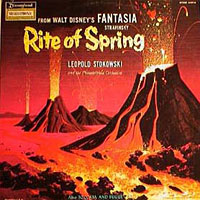 Nijinksky's restored ballet via The Joffrey Ballet's painstaking reconstruction can be found on in toto Youtube. The choosing of the sacrificial victim by a lethal game of "musical chairs" via Nijinsky's choreography still rings terrifying! (see 08:35 in video below:)

Below, Vaslav Nijinsky as he appeared dancing "Afternoon of a Faun" 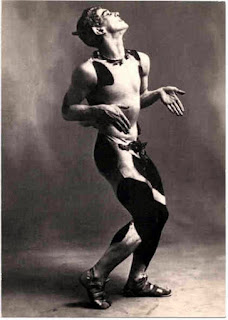 NOTE: link directly back to http://fastfilm1.blogspot.com if all elements such as photo layouts or videos aren't here.
Posted by Fast Film at 6:59 PM