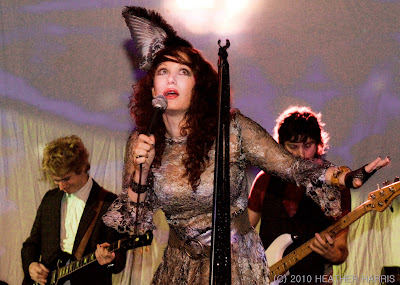 The Ruby Friedman Orchestra performed at the 11.12.10 Rodney on the RQQ presents Club Romper Stomper, as hosted by perennial Mayor of the Sunset Strip and DJ, Rodney Bingenheimer.

This proved a terrific pairing. Ruby Friedman performs as out there a full on, torchy-emotional singer as one can be and still remain under the aegis of rock and roll, ably abetted by the Orchestra which includes a fulltime trombonist. She always dresses for any occasion, shall we say, "unusually" (but flatteringly and interestingly. And her Facebook posts remain a hoot what with their surreal philosophizing. She just may be a closet intellectual.) 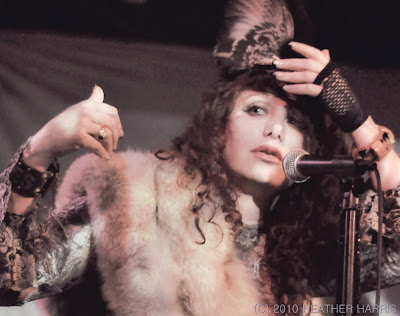 But RFO music is the show and the real deal. They've already earned nationwide aural recognition for their song "Shooting Stars," the theme for tv's "America's Got Talent." It's only a matter of time then before America correlates the faces of this hearty ensemble with their songs. It's way fun to photograph, see and hear nascent talent on the rise before it explodes. I felt the same twinges 40 years ago seeing another young redhead, Bette Midler, when she began her own worldwide conquest. More RFO: LINK 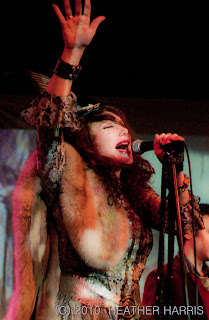 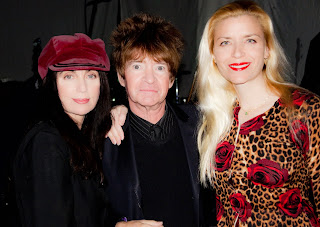 Rodney, one of radio KROQ's top DJs who along with Sex Pistol Steve Jones, remain the only two allowed to program their own music shows hence the breaking newcomer acts fame of each, is no stranger to club impressario-ship. He helmed both the E Club and the Glam world's infamous Rodney's English Disco in the mid-70s, ground zero for amok nubile nymphets versus rock stars, both equally matched. You can view the infamy back in the day firsthand in Bob Gruen's excellent "All Dolled Up" documentary of the New York Dolls, readily available on dvd, or watch a cunning simulation via the recent film "The Runaways" (LINK) which featured music from my 1970s via punk rock, glitter and Iggy and The Stooges, a refreshing change from the MOR mellowmush or discodance usually offered up cinematically for the era. 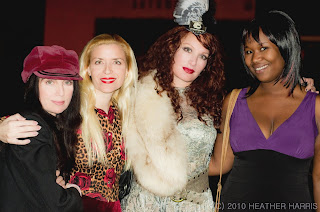 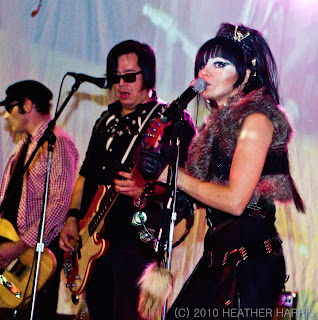 Ruby and Rodney onstage (below) 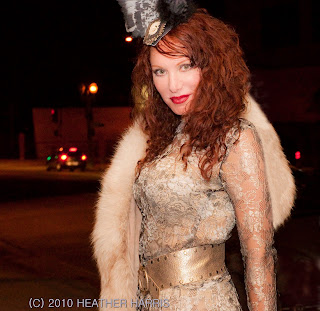 after the show (right)

and from the show (below)
NOTE: link directly back to http://fastfilm1.blogspot.com if all elements such as photo layouts or videos aren't here.
Posted by Fast Film at 9:59 PM