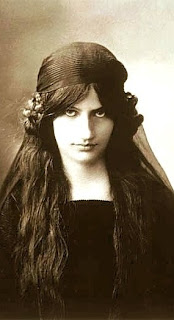 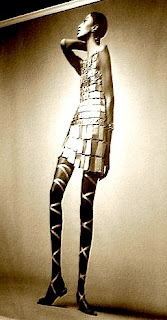 Many short essays by Don Strachan with his unique P.O.V. about Donyale Luna (Richard Avedon iconic photo of her in a Paco Rabanne minidress of metal rectangles, above left illustrating a gallery exhibit, image photographer unknown,) the international high fashion world's first black supermodel remain online at LINK . You'll find them all very good reads but they're a bittersweet coda to 2011 as Don, my UCLA-era friend and occasional work colleague who wrote it, passed away mid-October of that year.


Yes, he knew her personally from their mutual school days in Detroit, Michigan, dated her even. A six foot tall beauteous teen, Donyale Luna (born Peggy Ann Freeman) was ebullient, theatrical, ambitious from a young age and sensitive according to Don. She'd lived through the horror of her own mother shooting her own father dead, and the nascent, arson-inclined Black Power scene in 1960s Detroit. She'd dated assorted Rolling Stones in the mid-1960s even appearing in Michael Lindsay-Hogg's The Rolling Stones Rock and Roll Circus film, graced multiple Vogue magazine covers in her extensive pro modeling career and starred onscreen via Federico Fellini and Otto Preminger. 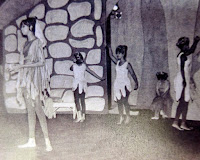 Left, Donyale with Rolling Stone Brian Jones, photographer unknown; right, Donyale far left as Ariel in Shakespeare's The Tempest, Detroit Civic Centre Theatre, 1964.  Fair use photo by Karen Roscup.
Nothing seemed enough and she died of a drug overdose at age 33. Don tried to delve into why, so many decades after the fact. Regarding one mutual incident with Donyale, Don wrote that his new realization of the personal fallout of same for her prompted him to burst into tears.

The second portrait at the top is of beguiling Jeanne Hubeterne, muse and paramour of Amadeo Modiligliani, he of the gracefully elongated, painterly but modernist portraits a century ago. In 1920 three years after meeting him and co-habitating with the artist, Modiligliani died of tuberculosis, whereupon the inordinately distraught Jeanne threw herself off of a building, 8 and 1/2 months pregnant with their second child, aged but 20 years old herself.

I'd been hoping that the biography Modligliani: A Life by Meryle Secrest would elaborate on this truncated life. The author tried, constrained as she was by Jeanne's and Amadeo's surviving daughter's great nephew, a lawyer who promised a lifetime of litigious misery if photos of Ms. Hubeterne or her own artwork found their way to print via this bio.

The author did convey this: apparently this pretty young woman with that very sultry gaze was a talented art student, somewhat quiet but opinionated and forthright when she so chose (her parents recoiled at her arguing with the local abbott.) The couple lived the Boho life in 1910s Montparnasse, Paris, France wherein, one is reminded, women had no rights prior to vote suffrage post World War II. The muse herself was emotionally strongarmed to sublimate her own desires to those of her handsome if dissolute and ailing Italian artist boyfriend, 15 years her senior.

And her parents ...didn't ...exactly ... approve (can we say subjectivity boys and girls?) In the aftermath of Modigliani's death they'd insisted she move back in with them at once although child # 1 wasn't deemed welcome. Forsaken by all those she'd once loved, she then leapt out their 6th floor window to her death and child #2's death. Child # 1 was raised by the paternal grandparents, needless to say.

The painting below delineates the oeuvre of the work of the teenaged Ms. Hubeterne, not that of her famously enduring lover. A portrait of him, it shows great artistic confidence, sadly not mirrored in her own personal life. 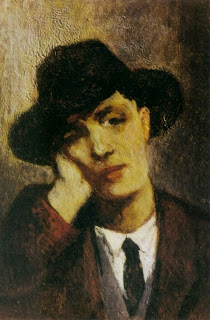