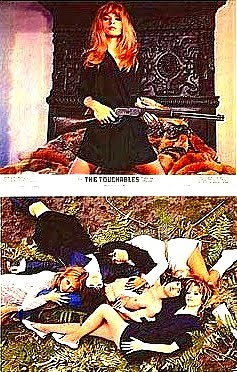 Sometimes happy happenstance elevates born-to-be mediocre movies out of sync with same and into better categories.


Ofttimes it's a far better script than was commissioned for action unit-shifters. "Timecop" and the original "Stargate" film comprise this type, wherein scripts chock full o' terrific ideas and/or original variations upon generic themes coupled with novel casting (Ron Silver and Gloria Reuben in the former, James Spader and he/she Jaye Davidson in the latter) equaled instant classics. Stallone's "Demolition Man" proffered the absolute cleverest script of all of 'em, probably by accident for an action-grunter, as if "Blade Runner" were rewritten by the Mighty Boosh, Kids In The Hall or SCTV (pick your own era.)


And sometimes it's just one unexpected idea running rampant throughout that wasn't even part of the script but emerged full-blown anyway in production. This can make fabricated mediocrity wondrous to behold and mightily entertaining. Such a film is "The Touchables," a 1968 Mod sex-comedy (with little actual sex shown, which is rather sweet in the old-fashioned sense of the word) that is impossible to find through normal channels but readily available online and the occasional British Mod film festival (rightly billed as the rarest and wildest of them all- one extant print in the universe.) It's worth the search, particularly for those who adore Brit-Mod artifacts and those who want to see the tipping point genesis of girl power and womens' liberation barreling through a what was supposed to have been contrived sexism.


Its plot remains touchstone of Clint Eastwood's "The Beguiled," and "3 In the Attic," and stylistic predecessor of "Performance" (more of that in a mo') with its graft of wispy, girlie 60's hippie flightiness with ultra-butch fightclub/underworld. Four young, stylish, wealthy women friends like to go wilding/adventuring together. Busted for stealing a Michael Caine wax figure with which to dance at home from a party they attended at a wax museum, they plot to graduate to stealing an actual, real in the flesh pop star. They spirit him unconscious to their literal pleasure dome (an inflated geodesic one - plastic furniture and architecture was inexplicably cool in the mid-60's) out in the deserted countryside to have their wicked way. He, as one might imagine, doesn't exactly object to foursomes and much role-playing with terrific-looking young women, so plot complications ensue from the butch pro-wrestling/underworld figures related to the pop singer's management finding him and roughing quite a few souls up.


The film's pretext is visual, firstly, since its director was Robert Freeman, famed album-cover still-photographer of the Beatles premiere iconic works. The lighting is directional, unusual in the era of over-lighting all movie scenes, and his locations and prop choices are strange-- the geodesic inflatable dome with a carousel-bedecked round bed inside, one young woman grabbing her toy reindeer as a matter of course while she's fleeing to get help. 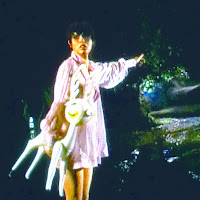 Fortunately his directing style specifically calls for action, varying betwixt aforementioned colorful wispy/hippie/girlie and stark, gritty non-colorful butch fightclubbing. In the '60's, a shared pastime was to take joy in all things visual, so disregard Leonard Maltin's assessment of "bomb": he probably saw a terrible copy of this rare movie (will somebody please restore this already a la "Privilege?") Secondly, that girlie/butch polarity emanates from none other than Donald Cammell, future director of "Performance," a film about same with Mick Jagger and James Fox as fey popstar versus mob hitman who clash then blend. The Cammell brothers, plus Ian La Frenais (future screenwriter in the rock genre of "Still Crazy," and "The Commitments") account for its rock underpinning alongside Freeman and the film's score. You'll love the theme song by (the first) Nirvana: they probably thought they were re-inventing psychedelia, but to our ears today it's a pleasantly unplaceable mash-up of Traffic and Procol Harum.


So what's the magic ingredient that propels this out of PG-rated sexploitation? It's the self-reliance and camaraderie of the young women characters, way out of sync with even the best of 60's popular fare; i.e., "The President's Analyst" may be the primo 60's comedy of all, but it's attitude towards women is cringe-inducing in retrospect today, repellently sexist as were all 60's non-arthouse films. In "The Touchables," these heterosexual women have fun with one another, are indulgently eccentric in their separate ways, determine their own actions, and share their hobbies; they aren't satellites to any male character and don't act like it anyway. One of them's wrestler "boyfriend" actually needs her as a beard to counter his proclivities in the macho world of wrestling: her girlfriends and she just have fun and party with him in his world as would any, to use an antiquated perjorative, fag hag.


That these four model/actresses, quintessential Mod dollybirds of the mid-1960's in real life, can convey such camaraderie is the miracle herein. These four strangers enact a far closer friendship than The Spice Girls in their own movie no matter how loudly Girl Power was trumpeted therein, and convey, within a Mod style palette, all the wildness of Riotgrrls in their lifestyle of adventuring. This, strangely enough for a commissioned sex comedy, inexplicably always comes shining through: these young women are very good friends who are there for each other in fun or hardship, and do what they themselves want to do. That was just as much a desirable fantasy for women as being abducted by four beautiful women for sex would have been for males... 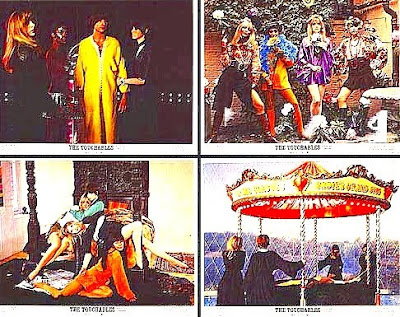 NOTE: link directly back to http://fastfilm1.blogspot.com if all elements such as photo layouts or videos aren't here.
Posted by Fast Film at 10:22 AM