PHIL OCHS FILM, my take -WITH THE SPEED OF INSANITY THEN HE DIED

The documentary film "Phil Ochs: There But for Fortune" opens this week in New York. Without having seen same I can recommend it heartily, and not just because Van Dyke Parks and Billy Bragg speak up within (movie trailers via this link as well as info and some great photo stills.) There's a few personal reasons to boot. 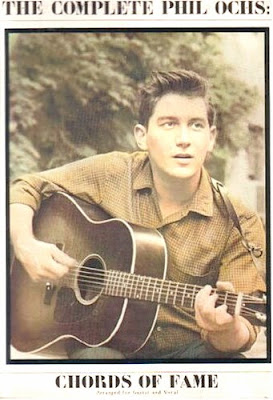 My brother had introduced me to his work as it happened, so to me he always was the companion compatriot of Bob Dylan's canon. I'd read Ochs' reviews in the obscuro film magazine "Take One" in the '60s so I knew his intellect and interests spanned beyond political causes.

I once saw a gold lamè suit-clad Ochs tear up the Troubadour performing live, inspiring wild 1950s dancing in the aisles no less, rather unexpected for a "folkie" artist. I'd had some professional interaction with Phil's brother Michael, no less extrovert, good-humored yet subversive but preferring to be same within the corporate entertainment industry directly.

I'd encountered Phil at a get together at someone's house on Beverly Glen whereupon the host urged Phil to perform for everyone there. I must have betrayed an askance visage at the uncoolness of exploiting a famous guest by exhorting them to sing, so the host privately confessed to me that Phil recently had been mugged in Africa with his throat slit; therefore, people asking him to sing was therapeutic and useful to whatever his vocal recovery would be. Shame on me!

I did the art direction and graphic design for the above book formulated by Michael Ochs. It included many shots by photo greats like David Gahr and others (Phil as icon at the podium playing to hundreds of thousands of people on the streets of Washington D.C. during modern history's most famous '60s protests,) tons of personal family photos, detailed music tablature for some sixty of his songs, and an amazing essay on Ochs by Tom Nolan both bone-chilling in its revelation of tragedy and heart-breaking in its post-mortem insights on the man. This book was published within eighteen months or so of Phil Ochs' suicide.

Lastly, to the world his legacy was political protest set to music but to me his masterpiece remains "Crucifixion," a mash-up delineating all assassinated heroes like John F. Kennedy or Jesus of Nazareth, cult of personality fan worship versus true personal sacrifice, and humanity allowing no great deeds to go unpunished. This was the sole complete transcription of lyrics I used in the book as a statement about Ochs' far-reaching talents as much as a graphic element.

I'm into neither politics nor religion (despite knowing the good both can do in the rare right hands since both wish lives to be better, it's just that 99.99% of the time they get it all wrong on their inevitable downturn to totalitarianism) and am rarely swayed by lyrics alone, but hearing this song, now as then, makes me instantly weepy.

It is that good, that deft in its execution as well as messages. It transcends even his own metier and stated purposes. The original 1967 LP (Pleasures of the Harbor) version with its experimental orchestration courtesy of avant-rocker Joseph Byrd underscores Ochs' finest lyrical sweep of similes, not a pre-used cliche among them, along with engaging pop-chorus catchphrasing. He combined everything he ever wanted to, pop to protest, sacred to profound. Example:

"...So he stands on the sea and shouts to the shore,
But the louder that he screams the longer he's ignored...
...'Till the giant is aware, someone's pulling at his leg,
And someone is tapping at the door.
So dance dance dance
Teach us to be true
Come dance dance dance
'Cause we love you..."

No Youtube video exists of his original arrangement, but the full lyrics are HERE. Enjoy. And let's catch that movie.
Posted by Fast Film at 1:12 PM

Just wanted to say that I loved your piece on There But For Fortune - I saw it in December in an advance press screening (son is a music journo) and then I was there last night at the opening. It is a masterpiece film - don't miss it. And I too have been saying for years that Crucifixion may be the most brilliant song ever written. After all these years, maybe Phil will get his due. And I have owned the book you designed since it came out - it is beautiful work. Thank you for it all. Tina Vozick

Your comments and compliment made my day, thank you Tina.

And Tina, I like surprising contrasts like Phil Ochs, known for factual specifics of politics in song, writing this lyrical, sweeping analogy Crucifixion, or Tom Nolan, "Mr. Hollywood" writing that piece on Phil's decline with such insight and empathy that it made me cry, or even myself, Ms. I ♥ hardest rock 4Ever being moved, being really moved by Crucifixion, Phil's story and canon overall.

I really try not to discuss religion and politics. I feel lyrics are personal to the listener, anyway. I agree. Crucifixion makes me cry because of what it represents as a whole. It applies today as much as then. I really feel his haunting. The fact you care about anything is haunting.
I miss music like that.