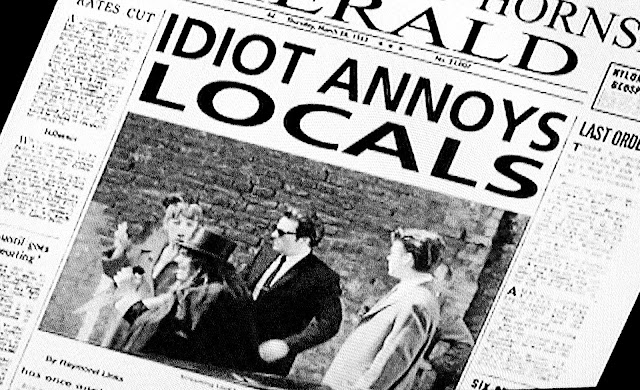 Spoiler to tweak your interest: had Joe Meek been paid what he was owed for his international hit "Telstar" written and produced for The Tornados, it would have amounted to $21 million by today's inflated lucre. After years of nuisance litigation and concomitant hardships, his settlement monies arrived in the mails in full two weeks after Meek's suicide.  As Lou Reed once noted, "It's called bad luck." It's also a compelling cautionary tale of a much-beleaguered mad genius.

Newly available for sale or whatnot in America, the 2008 film "Telstar: the Joe Meek Story" presents a great rock and roll story unbeknownst to most U.S. music fans, with an authentic feel alternating betwixt hilarious and horrifying. It's cast with names you do know, say, Kevin Spacey or Carl Barat of The Libertines as singer Gene Vincent, and many you'll retain for future reference such as its amazing lead, Con O'Neil who perfected his manic but sympathetic portrayal in the stage play source material.

Throughout the 1950s and '60s, record producer Joe Meek pioneered separation of sound and instruments, the latest soundwave-synthesizing keyboards, controlled feedback for special effects and reverb, all achieved gerry-rigged to the max in a both figurative and literal home studio, up and down assorted floors of a flat above a shop. Props to the art director for visuals depicting these techno experiments in the studio, all Rube Goldberg wiring and 'Brazil'-esque ducts, vents and toilet plumbing pipes.

The gory ending made me feel for the real Patrick (known by a passel of A.K.A. stage names,) Meek's assistant who innocently witnessed this ghastly suicide, then falsely was charged with two murders (no spoiler forthcoming now: see this film!)

At least abundant humor provides sufficient counterbalance. Ofttimes it was subtle, like someone rushing to adjust the mike stand two feet down for a television star to sing, or the newspaper headline which followed a promotional stunt for Screaming Lord Sutch, "IDIOT ANNOYS LOCALS!" (screen capture at top.) Despite this nomenclature, Justin Hawkins (lead singer of The Darkness so yes, that's his real hairdo) fashioned a quite suitable screaming lord onscreen, providing several of the film's genuinely LOL scenes. Based on "Telstar," Hawkins and Barat both continue to act...


NOTE: link directly back to http://fastfilm1.blogspot.com if all elements such as photo layouts or videos aren't here.
Posted by Fast Film at 11:11 AM